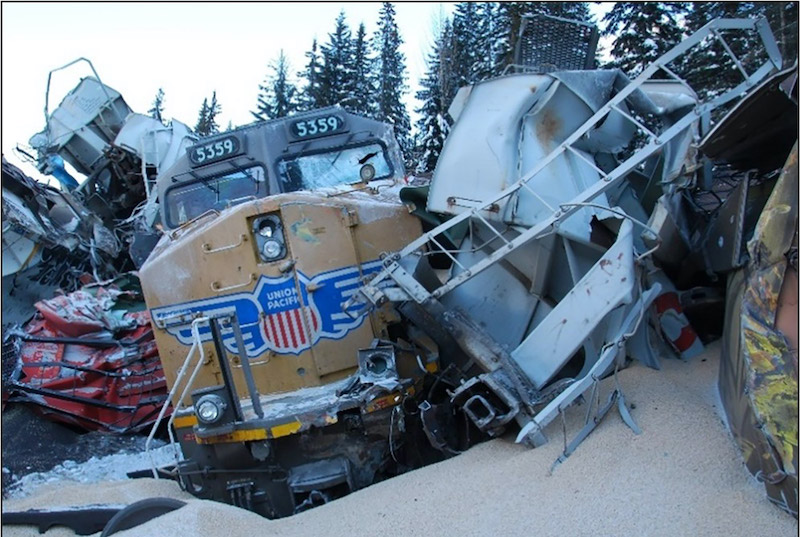 FIELD, B.C. — Extreme cold temperatures, inadequate brakes and one of the most dangerous pieces of mountain railroad in North America led to the death of three men in February 2019, the Transportation Safety Board of Canada announced Thursday.

On February 4, 2019, a Canadian Pacific grain train ran out of control down the 2.2 percent Field Hill near the British Columbia-Alberta border. Two locomotives and 99 cars derailed after the train hit a curve. The derailment killed three railroaders: Andrew Dockrell, Dylan Paradis and Daniel Waldenberger-Bulmer.

According to TSB investigators, the Vancouver-bound grain train crested the summit of Field Hill on the evening of February 3, 2019, but had to go into emergency after the crew was unable to maintain the appropriate speed. The brake cylinder pressure retaining valves were set on 84 cars to keep residual air pressure, which would facilitate getting the train underway again, allowing the air brakes to recharge as it continued its descent, investigators wrote. No handbrakes were set. About three hours later, a new crew came to relive the previous one. Not long after the new crew climbed aboard, the train slowly started to roll downhill. The train rolled downhill, through the Upper Spiral Tunnel, and hit a speed of 53 miles per hour before derailing on a tight curve.

The investigation, which lasted more than two years, found that the brake cylinders were leaking compressed air over time and that the situation was made worse by the age and condition of the equipment as well as the extremely cold temperatures at the time. The investigation also found that a trainmaster on site was not adequately trained to deal with operations on Field Hill. CP has crews assigned to the Laggan Subdivision go through extra training just to deal with the hazards of that part of the railroad. The report specifically noted that “The route through the Rocky Mountains on the Laggan Subdivision traverses some of the most challenging railway operating terrain in North America. Winter temperatures, ice, and snow compound these challenges—and present specific ones as well.”

TSB also made three safety recommendations as part of its investigation: That CP inspects the adequacy of braking performance of its grain cars; that it considers residual risks for trains stopped in emergency on mountain grades; and that there be an alternate approach to determine the effectiveness of freight car air brakes. Since the 2019 wreck, CP has removed more than 5,000 grain cars from service for repair, TSB investigators stated.

“This tragic accident demonstrates, once again, that uncontrolled movements of rolling stock continue to pose a significant safety risk to railway operations in Canada”, said TSB Chair Kathy Fox. “It is obvious that more must be done to reduce the risks to railway employees and the Canadian public, reduce preventable loss of life, and increase the safety and resilience of this vital part of the Canadian supply chain.”

The Laggan Subdivision has long been considered the toughest piece of railroad on the CP system and is known to local railroaders as “The Big Hill.” In fact, one of the first trains to descend the grade in 1884 shortly after construction derailed into the Kicking Horse River, also killing three people.