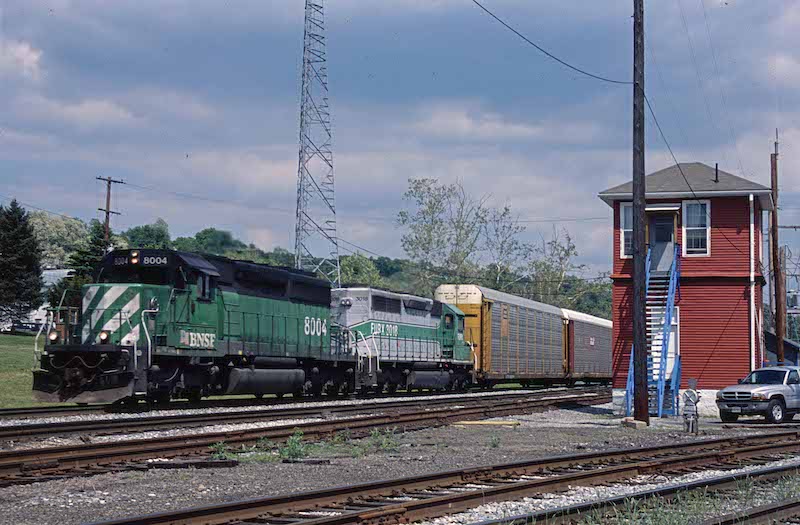 A westbound CSX freight passes West Brunswick (WB) Tower on May 16, 2005. On Saturday morning, the structure will be moved off the railroad property for preservation. Photo by M.T.Burkhart.

BRUNSWICK, Md. – Following years of planning and discussion, the City of Brunswick, Maryland, will finally move the historic WB Tower off of CSX property, the city announced this week.

The interlocking tower, built around 1910, was removed from service a decade ago and residents feared the historic Baltimore & Ohio structure would be demolished. Coordination of engineering services, structural analysis, consideration of appropriate locations, transfer of ownership, and the logistics of moving the two-story building delayed the project several times through the years, according to the city.

In 2020, the state announced a $15,000 award from the Maryland Historical Trust Capital Grant Program to help with the move.

“The WB Tower and its largely intact interior machinery and communication cabling is a rare-remaining physical vestige of B&O Railroad’s long history in Brunswick,” officials with Preservation Maryland, which has been assisting in the project, said of the building. “Many of the buildings related to the massive footprint once held by the B&O and related industries in Brunswick are now gone, including the massive roundhouse, formidable YMCA, and many auxiliary buildings.”

Site preparation work was taking place this week with the move to a city-owned property across the tracks near the train station set for Saturday, April 2. Because the site will be an active construction zone, anyone planning to watch the morning move should do so from the Martin’s Creek parking lot, located on East Potomac Street. East Potomac Street will also be closed from First to Second Avenues for the duration of the move, the city said.