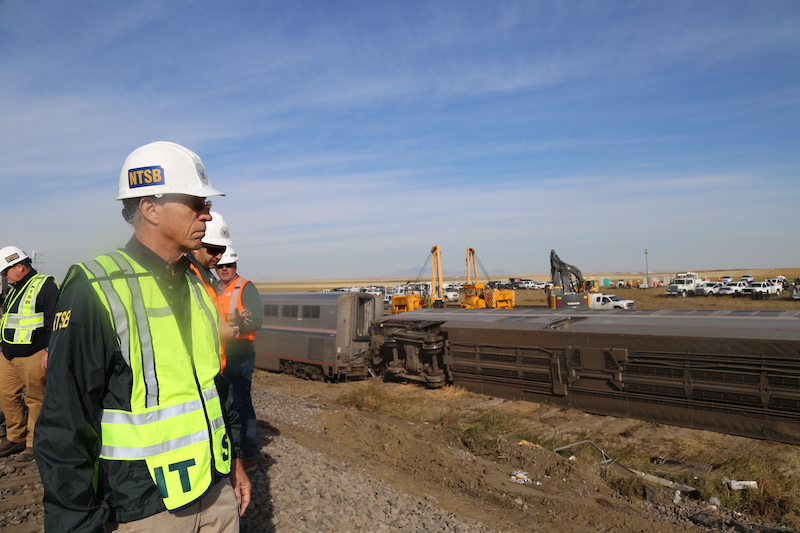 NTSB Vice Chair Bruce Landsberg at the site of last month’s Amtrak wreck in Montana. Photo Courtesy of the NTSB.

HAVRE, Mont. — A month after three people were killed when Amtrak’s Empire Builder derailed along a remote stretch of track in Montana, little is known about what caused the tragedy. On Tuesday, the National Transportation Safety Board, which launched an investigation into the wreck within hours, released its preliminary findings but so far nothing answering why the train derailed.

The westbound train derailed shortly before 4 p.m. on September 25, near Joplin, Mont., about 50 miles west of Havre on BNSF Railway’s Hi-Line Subdivision. Three people were killed and dozens were injured. Since then Amtrak and BNSF have been the subject of numerous lawsuits. According to investigators, the train was traveling west at 75 to 78 miles per hour, just below the track’s 79 miles per hour speed limit for passenger trains. The train went into emergency moments before derailing and the lead two locomotives and the first two cars remained on the rails. Eight cars derailed, with four ending up on their sides.

Most of those basic facts were available in the days after the derailment. In their preliminary report, NTSB officials said that the investigation — which could last for months — will now focus track and engineering, equipment, survival factors, and passenger railcar crashworthiness.