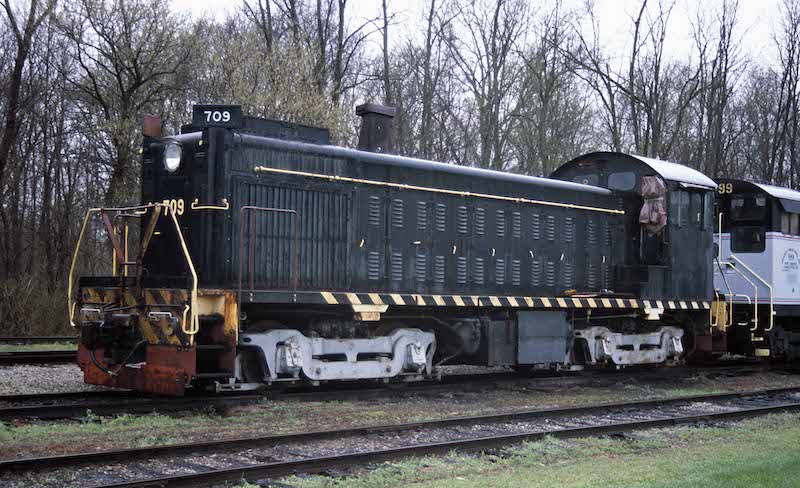 Armco Steel Lima-Hamilton switcher 709 is being restored to service at the Whitewater Valley Railroad in Connersville, Ind. The locomotive is seen here in April 2007. Photo by M.T.Burkhart.

The LS-1000 switcher was built in1950 and was assigned to Armco’s Hamilton, Ohio, works, where it hauled molten steel between two plants on a 12-mile Baltimore & Ohio branch, according to the tourist railroad. It later served as an in-plant switcher at Armco’s Middletown Works carrying the number E-137.

The switcher was donated to Whitewater Valley in 1987 and briefly operated. Only four Lima-Hamilton diesels are preserved in museums and tourist service – three at Whitewater Valley (where Cincinnati Union Terminal 25 is operational and ex-B&O 320 is not) and one at the Illinois Railway Museum (Armco E-110).

Many examples of Lima steam are preserved but Lima-Hamilton produced less than 200 diesel locomotives over just three years, and its models were abandoned when the company merged with Baldwin Locomotive Works in 1951.

The non-profit Whitewater Valley was formed in 1972, operating weekend passenger trains starting in 1974 on 25 miles of leased Penn Central track between Connersville and Brookville. After a washout closed the track between Metamora and Brookville that same year, Penn Central removed four miles of track in 1976. The remaining line from Connersville through Metamora was purchased by the Whitewater Valley in 1983, followed later by another mile of track in Connersville.

When complete, plans call for the 1,000 hp locomotive to be painted in its as delivered Armco scheme.