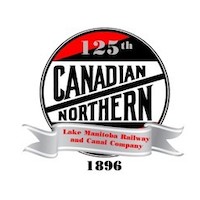 BIG VALLEY, Alberta — This week marks the 125th anniversary of the opening of the Lake Manitoba Railway & Canal Company, a pioneer enterprise that would grow to become the Canadian Northern Railway, Canada’s second transcontinental, and eventually part of the Canadian National Railway. To mark the anniversary, historical societies in Canada are hosting a pair of events in Manitoba and Alberta.

On December 15, 1896, the first revenue train on the Lake Manitoba Railway & Canal Company departed Gladstone, Manitoba. On Tuesday, December 14, the Dauphin Rail Museum in Manitoba, will commemorate the first train from Gladstone with a ride aboard VIA Rail’s Winnipeg to Churchill train from Ochre River to Dauphin. A photo opportunity at the corner of Mackenzie and Mann – named for the Canadian Northern’s founders will be followed by a short train ride over the very same route the first train used on that winter day 125 years ago.

On the following day, Wednesday, December 15, the Canadian Northern Society will hold a special event on the Alberta Midland Railway Terminal.

“This is a fitting location for our ceremony,” said Canadian Northern Society Director Rich Graydon. “The Terminal is located alongside CN’s Prairie North Line which is the original Canadian Northern Railway main line between Dauphin and Edmonton. We are looking forward to celebrating the achievements of our pioneer Canadian Northern Railroaders, and the Ukrainian community that helped build this important rail link across the prairies.”

The society plans to hold additional anniversary events in 2022, including a major celebration in Big Valley, Alberta, on July 9, 2022.