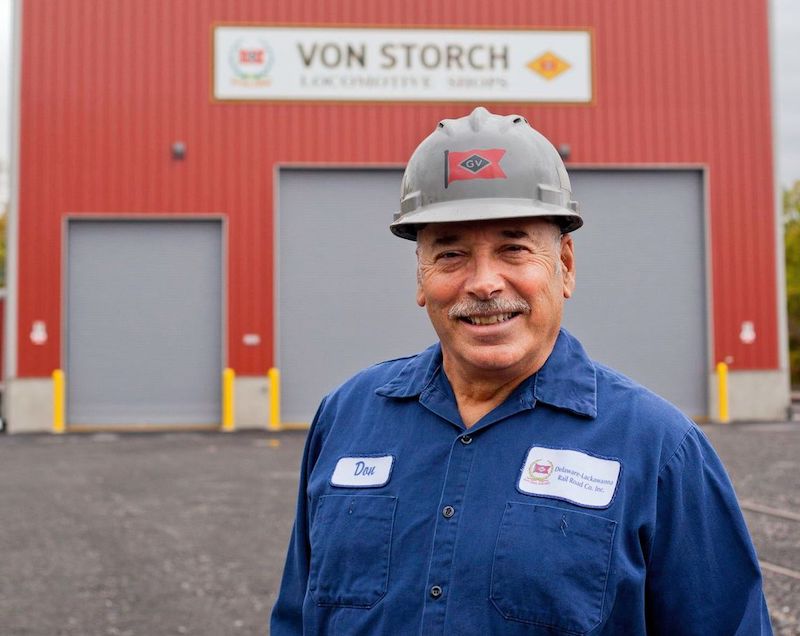 Don Colangelo helped build Genesee Valley Transportation’s fleet of Alcos and MLWs from 10 to more than 50 in the last 25 years. Courtesy Photo.

SCRANTON, Pa. — It is rare that the retirement of a railroader attracts much notice beyond family, friends and colleagues, but the announcement that Genesee Valley Transportation Vice President and Chief Mechanical Officer Don Colangelo would be this summer, surprised many fans of the iconic American Locomotive Company products.

Colangelo is known across the nation as “the Alco Doc” for his expertise in the repair and operation of Alco and MLW diesel locomotives, a reputation earned by helping assemble and maintain the world’s largest fleet of the increasingly rare breeds for GVT.

Colangelo helped build GVT’s fleet from 10 Alcos to 50 over the course of 25 years with the company. He shared President David Monte Verde’s belief that with proper care and maintenance, an Alco diesel can operate almost indefinitely.

Today, GVT has a roster of more than 50 locomotives that resemble the fantasy fleet of an Alco fan’s model railroad, clean as a whistle, inside and out. The standard of excellence Colangelo established in the GVT mechanical department led to widespread recognition of his accomplishments. Other Alco operators and mechanics who sought his counsel found him a generous and helpful source of information.

In its announcement of his pending departure in August, the company stated, “The entire GVT Rail team would like to wish Don a long and happy retirement. His insight, camaraderie, and vast knowledge will be greatly missed.”