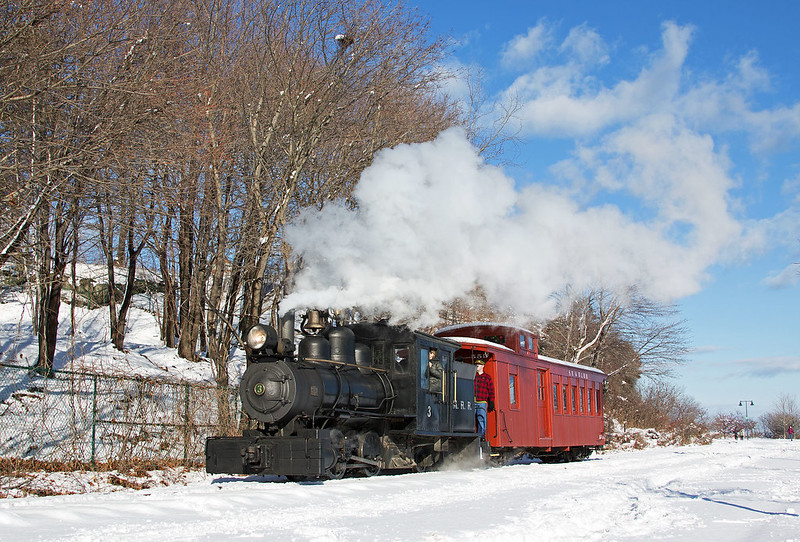 Monson 3 is one of the most well-traveled of Maine’s iconic two-foot gauge steam locomotives. Here the locomotive is seen in Portland, Maine, in December 2016. Photo by Justin Franz.

WEST SPRINGFIELD, Mass. — After a two-year hiatus, the Amherst Railway Society’s annual Railroad Hobby Show, one of the largest train shows in the country, is back in West Springfield, Mass., this weekend. Among the highlights of the show spread out over four buildings at the Eastern States Exposition will be more than 60 operating layouts and displays, from Z to G scale. But one group from Maine is bringing a model that measures 12 inches to the foot — or to be more specific, 24 inches to two feet.

Monson Railroad 0-4-4T 3 will be steamed up and running back and forth on a short stretch of track outside the show representing the Maine Narrow Gauge Railroad Co. & Museum, the Wiscasset, Waterville & Farmington Railroad Museum, and Maine Locomotive & Machine Works. The locomotive headed south on a trailer earlier this week. 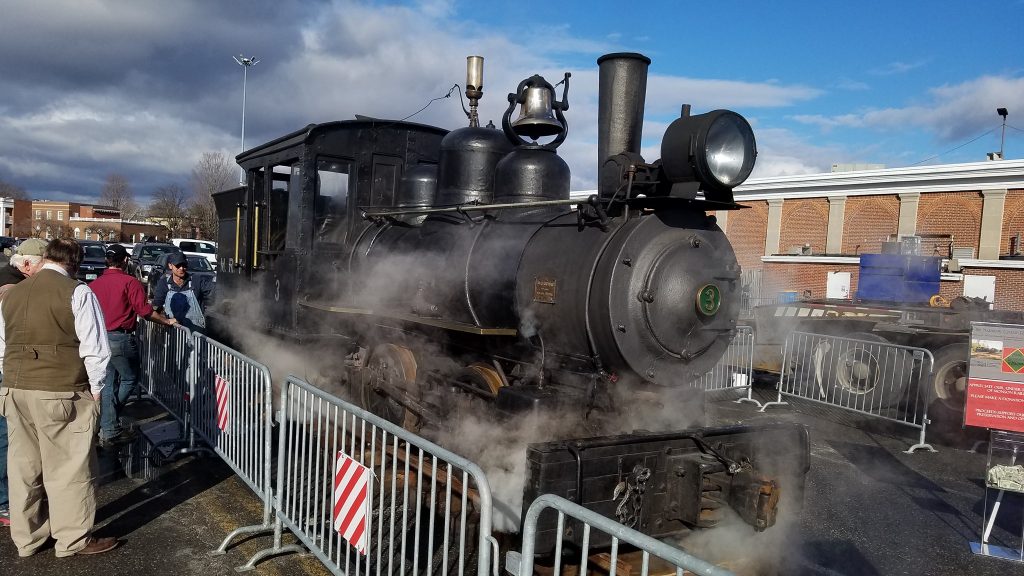 Monson 3 at the Amherst Railway Society show in 2020. Photo by Otto Vondrak.

Since 2017, a full-size steam locomotive has been brought to the train show thanks to the efforts of a number of Maine narrow gauge museums. In 2017 and 2018, Edaville 11 was on display, a 1925 H.K. Porter locomotive built for a 30-inch gauge industrial railroad in New Jersey. In 2019, the Boothbay Railway Museum brought its recently-restored S.D. Warren & Co. 0-4-0 saddle tank. And in 2020, Monson 3 attended the show.

Monson 3 was built by Vulcan Iron Works in 1912 for a slate-hauling two-footer based in western Maine. The locomotive and its sister, (Locomotive 4, also owned by MNGRR) worked at Monson until the 1940s when they and the rest of the state’s surviving narrow gauge equipment headed to the Edaville in Massachusetts. In the 1990s, the equipment returned home to Maine and locomotive 3 leads regular excursions either on the Portland waterfront or up at the WW&F in Alna. In the last two decades, locomotive 3 has become something of an ambassador for the Maine two-footers, traveling around the state and beyond to different events where it is operated on a short stretch of track — much like it will be this weekend.

For more information about the Amherst Railway Society’s annual Railroad Hobby Show, visit their website. Be sure to stop by the White River Productions table in the Young Building and keep an eye out for Railfan & Railroad Managing Editor Otto Vondrak!