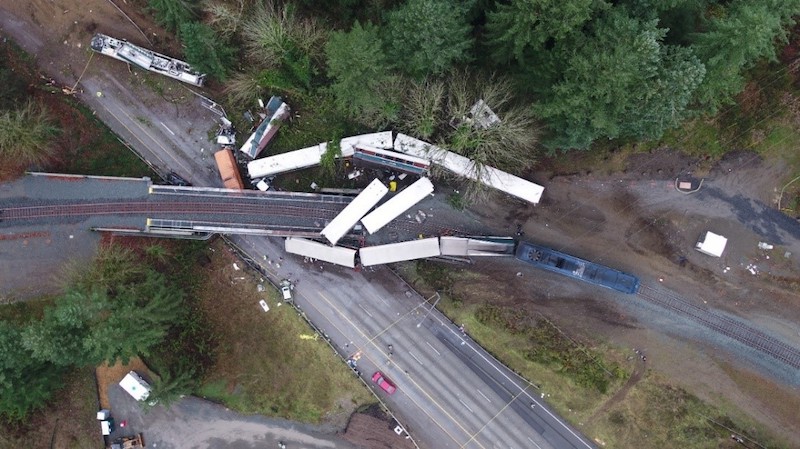 An overview of the December 2017 wreck of Amtrak 501. Photo Courtesy of Washington State Patrol.

SEATTLE — Four years after three people were killed and scores were injured when an Amtrak train derailed on its inaugural run on a new bypass south of Seattle, trains will return to the infamous route. On Wednesday, Amtrak announced that trains will start using the Point Defiance Bypass again on November 18.

The bypass had been constructed to move trains further inland away from Puget Sound. But the inaugural run in December 2017 was mired in tragedy when Amtrak Cascades 501 derailed on a tight curve over Interstate 5 near DuPont, Wash. The National Transportation Safety Board later determined that the train was going too fast for the curve and blamed insufficient training and the lack of Positive Train Control for the disaster. Shortly after the tragedy, Amtrak, Sound Transit and the Washington State Department of Transportation vowed to not run trains on the line until PTC was in service.

In preparation for the return of train service, Amtrak said it fully trained crews to ensure safe operations.

“Amtrak is continuously improving safety for the benefit of our customers, employees, and the communities we serve,” said Stephen Gardner, President of Amtrak. “We are ready to safely resume service on the Bypass consistent with the steps required by our host railroad, Sound Transit, the Federal Railroad Administration and our own Safety Management System.”

The first Amtrak Cascades train using the Bypass will leave Seattle at 7:22 a.m., arriving in Tacoma at 8:08 a.m. The first northbound train from Oregon will leave Eugene at 5:30 am and Portland at 8:20 a.m., arriving in Tacoma at 10:54 a.m. A total of eight trains – including Amtrak Cascades and Coast Starlight – will use the Bypass daily, with additional trains added in the months ahead as COVID restrictions ease. As a result of the change, operations in Tacoma will move to the new Tacoma Dome Station, near the Sounder and light rail stations on East 25th Street.