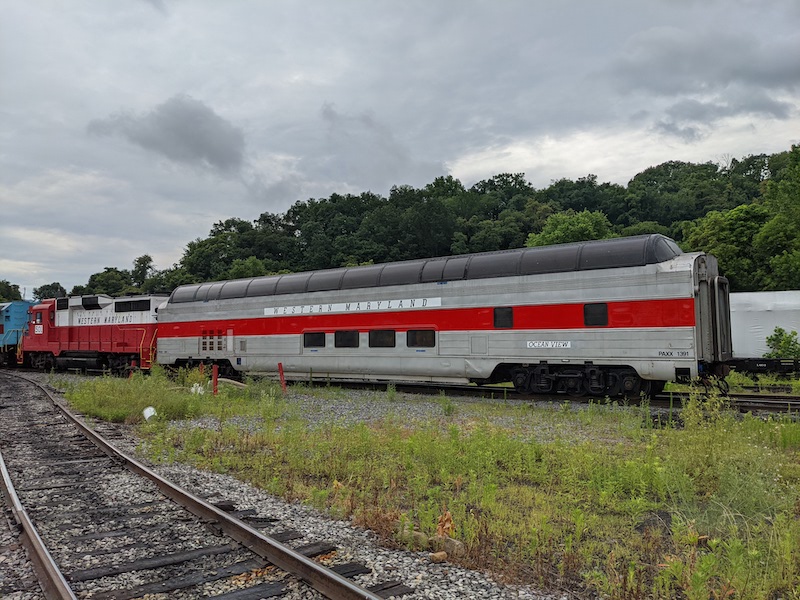 Dome car Ocean View was brought to the Western Maryland Scenic through a partnership with Railexco and Paxrail. Photo by Michael Voiland.

CUMBERLAND, Md. — A former Great Northern Railway full-length dome is entering service on the Western Maryland Scenic Railroad this week. The car, named Ocean View, was repainted and lettered Western Maryland recently and is at the railroad thanks to a partnership between Railexco and Paxrail.

The 92-seat passenger car was built by the Budd Company in 1955 and ran for 63 years. Amtrak used it on a number of trains, including the Adirondack and Downeaster, during the fall until it was retired in 2018. Amtrak put it up for sale in 2019 and it was eventually sold to Paxrail.

The Ocean View was one of six full-length domes built for the Great Northern Railway and Chicago, Burlington & Quincy Railroad for use on the Empire Builder between Chicago and Seattle. The Santa Fe and Milwaukee Road also had full-length domes. All six cars were later acquired by Amtrak and were used on the Empire Builder until 1979 when they were replaced by Superliners. A few of the cars were used on Auto Train in the 1980s and 1990s.

The dome car will now make regular runs between Cumberland and Frostburg on the Western Maryland Scenic’s seasonal excursions. Visit their website for ticket information.