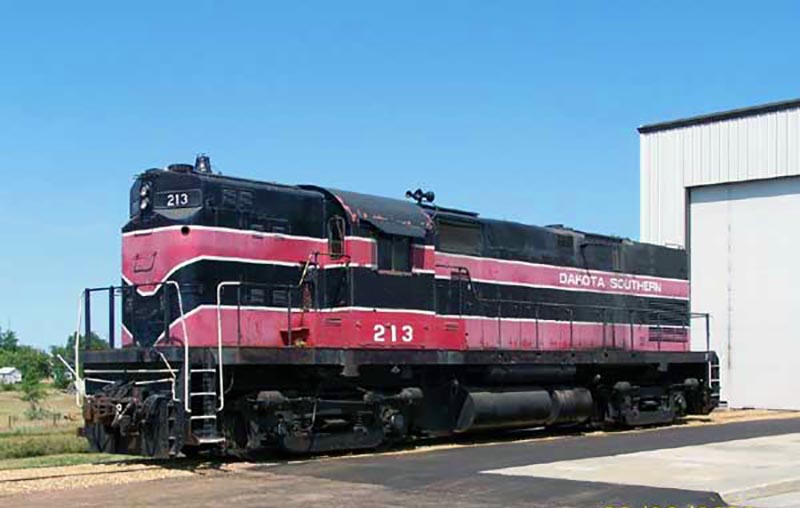 CHAMBERLAIN, S.D. — One of the few remaining examples from Long Island’s high-nosed Alco Century 420 fleet has departed Chamberlain, S.D., bound for Alco-stalwart Arkansas & Missouri, but plans for its use remain uncertain and news about some other long-stored Dakota Southern units has been grim.

Big changes began last February when WATCO bought the former Milwaukee Road track that Dakota Southern previously leased between Mitchell to Rapid City and began operating it as Ringneck & Western, spurring the disposal of units like the DSRC C420 213. The engine left Chamberlain in early December, weeks after “AM 69” reporting marks were applied. Though essentially intact, reports on its mechanical condition suggest it will become a parts unit on A&M, like many other Alco products arriving at its Springdale shop. The former LIRR 213 is among a handful surviving from the 30 built for the commuter line with high-short hoods to house steam generators, beginning in 1963. Only former LIRR 200 still operates, now at New York’s Lakeville, Avon & Livonia. Three others are scattered across the continent.

The 213 found a second career in freight service on Dakota Southern in the 1990s but has spent many years in storage after the failure of a traction motor, joining a group of rare diesels that included a DDA40X, three GE 70-tonners, several EMD SD7/9s, an Alco S-3 and the remains of a Soo Line GP30. The scrapping of some of these units began in 2021, with the GP30, an SD7 and an SD9 all gone by December.

One of these which is expected to survive is former Union Pacific 6925, the last EMD DDA40X “Centennial” unit not in preservation. It was brought to Dakota Southern as a parts source and fuel tank and is now owned by the Nebraska Railroad Museum, which is raising funds to move it to Nebraska City for display.