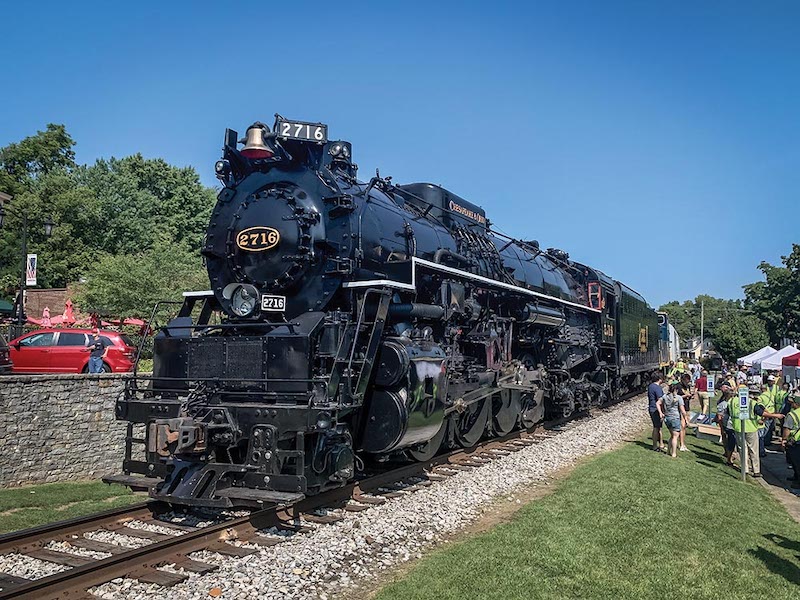 Kentucky Steam Heritage announced Saturday that 2716 will visit the Railroad Museum of New England for a months-long visit. Photo by Chris Campbell.

Kentucky Steam has inked an agreement with the Railroad Museum of New England to bring the big main line steam locomotive to its Naugatuck Railroad in Connecticut at some point in the future for a months-long residency. The visit will kick off what is expected to be a year-long trip from its home base in Ravenna, Ky., where it is currently being restored.

C&O 2716’s trip to Connecticut — which Kentucky Steam President Chris Campbell said could happen sometime in the middle part of the decade — would be the first visit of a main line steam locomotive to New England in more than a generation. Kentucky Steam said additional stops on its maiden tour would be announced at a later date.

“We’re pleased to be hosting C&O 2716 on our railroad, as it will be the first large steam locomotive to operate in New England since (the 1970s),” said Howard Pincus, chairman of RMNE. “It’s a wonderful opportunity to partner with a capable and visionary group like KSHC. Moving operational steam locomotives between heritage groups is quite common in Great Britain, but has only been done a few times in the United States.”

While many small steam locomotives have operated in New England in recent decades, visits by large main line steamers have been few and far between. In the 1960s and 1970s, Nickel Plate Road 2-8-4 759 led excursions there for Steamtown and Ross Rowland’s High Iron Company. And in 1975, Reading Company 2101 lead the American Freedom Train all the way to Portland, Maine. Since then, the largest steam locomotive to grace New England’s main line rails has been Canadian Pacific 4-6-2 1201, which made a trek across northern Maine in 1989.

The exact dates of the visit have yet to be determined and officials said they would not be announced until certain restoration benchmarks had been met. However, there were already plans in the works for excursions along the Naugatuck’s 19-mile line between Waterbury and Torrington, Conn., and even photo freights.

Kentucky Steam has been restoring 2716 since 2015. The group also owns a 40-acre former CSX Transportation yard in Estill County, Ky., where the work has been taking place. Campbell tells Railfan & Railroad that for the last few years the non-profit has been focusing on working on the shop facility itself. Now that a lot of that work has been completed, they plan on focusing on the locomotive more, which is about 30 percent done.

“We are several years off from making our way up east,” he said. “But with announcements like this, we hope people who have considered contributing to the restoration can see an end goal in sight. We are excited to get the engine fully operational and bring people to us in Kentucky. But we are equally as excited to get out on the road.”

Campbell said while Class I railroads, including CSX and Norfolk Southern, have been very generous to the non-profit, it’s important to not simply rely or hope for chances to get out on their rails. He said that working with established short line and tourist operators will get 2716 in front of more people when the locomotive is again running.

Along with Saturday’s announcement, KSHC is spearheading a fundraiser to secure $10,000 for the locomotive’s restoration by the end of 2021. To make a project-dedicated tax-deductible donation to the locomotive’s rehab, visit www.kentuckysteam.org/donate or by mail to Kentucky Steam Heritage Corporation, 499 Kirkland Ave, Irvine KY 40336.