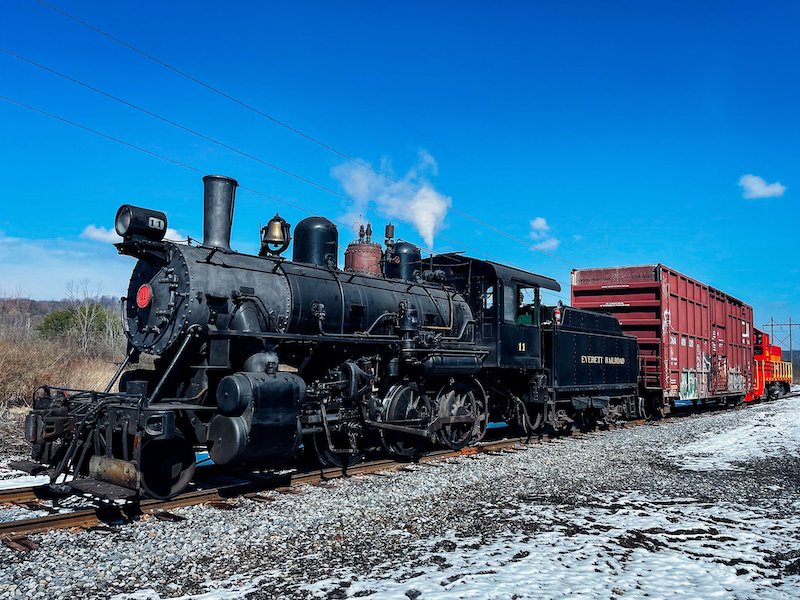 Everett Railroad officials said it had been challenging to get coal for the locomotive to burn. Photo by FMW Solutions.

HOLLIDAYSBURG, Pa. — The Everett Railroad Company has converted its 2-6-0 locomotive from burning coal to burning oil. The railroad said it made the transition because it was getting harder and harder to find coal.

The locomotive was originally built by Cooke Works of the American Locomotive Company to burn oil on railroads in Cuba, but it never ended up on the island and instead worked for a number of American roads. It was converted to coal early on and ran until the 1980s. It was purchased by Everett in 2006 and restored to service in 2015. More recently, it was used as a testbed to burn torrefied biomass. The conversion from coal to oil was spearheaded by FMW Solutions and aided by Stockton Locomotive Works.

“With our increased ridership and popularity, the 11 has been operating on our tourist trains now more than ever. It’s become a challenge to get the right coal at a reasonable price, and the quality of coal can greatly affect how a locomotive operates. Combined with our desire to be a good neighbor through reducing smoke, we’ll also be able to simplify our fueling logistics and free up more space for parking,” said Alan Maples, President of the Everett Railroad Company.

The Everett runs steam throughout the year. Visit the railroad’s website for more information.