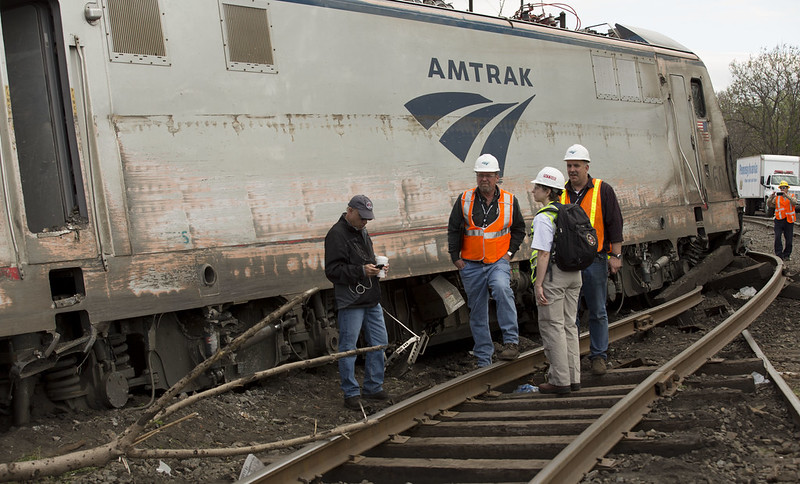 Engineer Brandon Bostian was at the controls of Amtrak 188 when it derailed in Philadelphia, killing eight people. National Transportation Safety Board investigators are seen at the wreck in 2016. Photo Courtesy of the NTSB.

PHILADELPHIA — The fate of a 38-year-old former Amtrak engineer will soon be in the hands of a jury. This week, a criminal case against Brandon Bostian is set to begin in Philadelphia, not far from where Amtrak train 188 derailed in 2015, killing eight people and injuring more than 200.

If the jury decides to convict Bostian of the criminal charges lodged against him — including eight counts of involuntary manslaughter and hundreds of counts of reckless endangerment — it could set a major precedent for charging railroaders involved in fatal derailments.

A National Transportation Safety Board investigation found that Bostian had lost “situational awareness” while running Amtrak 188 on the evening of May 12, 2015, possibly due to the fact that he was monitoring the radio following reports of rocks being thrown at other trains in the area. Not long after those initial reports, Amtrak 188 entered a 50 mile per hour curve at 106 miles per hour, resulting in the derailment. The NTSB stated that Positive Train Control could have prevented the tragedy.

Since 2015, Bostian has been in and out of the criminal justice system after a number of state and local prosecutors have made different decisions about whether or not to charge the engineer with a crime. Now, seven years later, one of those cases has now made it to a jury, which will decide if what Bostian did was a mistake or criminal. Opinions vary on what should happen to the engineer. Some have said it was a “basic error” and more of an institutional failure that PTC wasn’t installed. Prosecutors disagree, writing in court documents that a “Lack of burglar alarms does not cause burglaries, and lack of smoke detectors does not cause fires.”

The trial is expected to take up to two weeks, the Philadelphia Inquirer reports.

While civil lawsuits are common after derailments, criminal charges against the railroaders involved with such incidents have generally been rare. The most notable instance in recent years came following the oil train wreck in Lac-Megantic, Que., in 2013 that killed 47 people. Three Montreal, Maine & Atlantic employees were charged with criminal negligence causing death. A jury acquitted all three men.