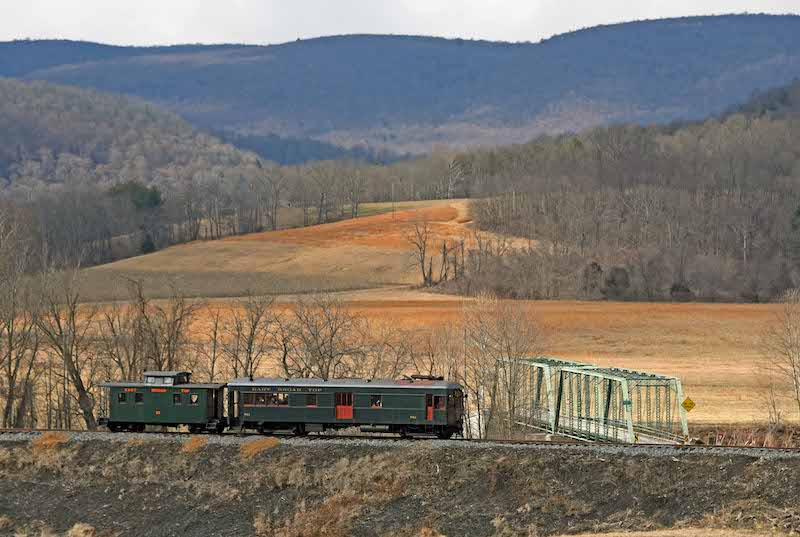 The East Broad Top’s narrow gauge M-1 doodlebug was the star of this year’s “Winter Spectacular” this past weekend. Photo by M.T. Burkhart.

ORBISONIA, Pa. – The East Broad Top Railroad hosted a “Winter Spectacular” on February 18 and 19, giving visitors the chance to see the reborn railroad up close as well as ride the reopened line.

The weekend started out with a twilight run of EBT’s M-1 Brill car followed by a night photo session with about 35 photographers. East Broad Top Mikado 2-8-2 12 was spotted in several locations around the yard and turntable, with smoke bombs used for effect. Following the “official” session, a handful of photographers stuck around for an impromptu line-up at the neighboring Rockhill Trolley Museum.

Saturday, February 19. found trips over the length of the EBT with the unique homebuilt M-3 and M-1 cars that used the rebuilt wye tracks on both ends of the railroad. There were also roundhouse tours, which included a look at 2-8-2 16 undergoing restoration. A timeframe for the locomotive’s return has not yet been announced.

Over at the trolley museum, visitors were treated to rides on numerous cars throughout the day, including one run of the “Liberty Liner,” built as an “Electroliner” in 1941 for the Chicago North Shore & Milwaukee. It later ran on SEPTA before coming to the museum. Late in the day, a trip was made with Chicago, Aurora & Elgin 315, which is undergoing a full restoration.

There were also tours of the Orbisonia station, and a fundraiser to help with the railroad’s documentation of the archives.

Winter Spectaculars were a much-anticipated staple of the EBT calendar in its earliest tourist railroad days. While Friday started off with warm temperatures, by evening it was windy and cold. And on Saturday, a snow squall blew through the mountains, adding a light coating of snow (before it melted) to make it a true winter event.

The 33-mile East Broad Top was built in the 1870s to bring coal out of the central Pennsylvania mines, but also carried general freight, mail and passengers. Demand for coal kept the railroad running until 1955, but it fell on hard times and filed for abandonment. In 1956, the assets of the East Broad Top Railroad & Coal Co. were purchased by Nick Kovalchick, a local salvage dealer. In 1960, the twin boroughs of Orbisonia and Rockhill Furnace approached Kovalchick about putting a locomotive on display for the towns’ bicentennial. Instead, excursions were run and continued for 52 years before the property returned to slumber in 2011. In February 2020, it was announced that the EBT Foundation had purchased the railroad and restoration has been ongoing.