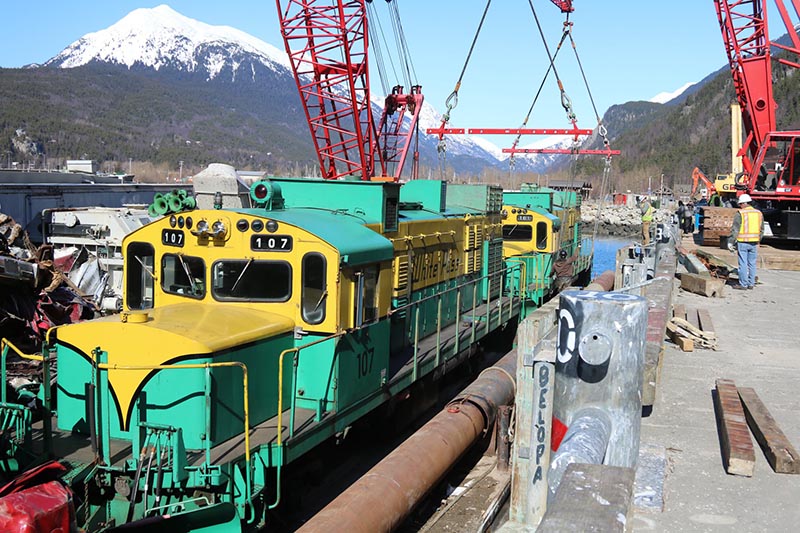 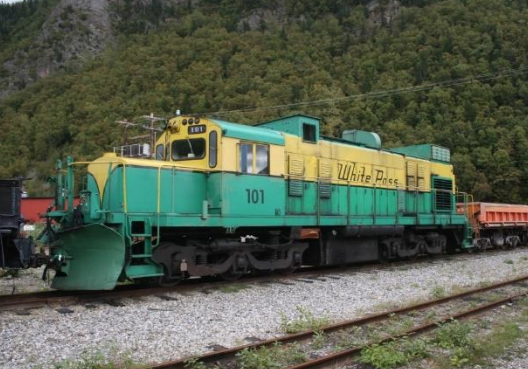 No. 101 is one of four WP&YR locomotives purchased by the D&SNG. Photo by Boerries Burkhardt.

The Durango & Silverton Narrow Gauge Railroad has purchased four diesel locomotives from Alaska’s White Pass & Yukon Route Railway.  On April 11, two Montreal Locomotive Works DL535E locomotives, Nos. 101 and 107, were loaded onto a barge in Skagway, Alaska, for the multi-week journey to Colorado. Two other locomotives will be shipped next year. D&SNG officials said the MLWs will initially be used on work trains and its short Cascade Canyon Express excursions, which cover about half of the railroad’s 45-mile route.

“Reliable narrow-gauge diesels of this size, design and efficiency are few and far between, so the D&SNG jumped at the chance to acquire them when we were first approached last year by the WP&YR,” said D&SNG General Manager Jeff Johnson.

The motive power swap between the two iconic 3-foot gauge railroads comes at a time of change on both route’s rosters. The WP&YR recently purchased six new diesels from National Railway Equipment Company in Illinois, the first of which arrived in Skagway this spring. Meanwhile, the D&SNG has been looking at getting diesels for nearly two years after it was shut down for over a month in 2018 due to a wildfire during a historically dry summer. Investigators with the U.S. Forest Service have claimed the fire was caused by one of the D&SNG’s coal-fired steam locomotives. After the fire, the D&SNG announced that it was purchasing two new MP2000NG locomotives from Motive Power & Equipment Solutions, Inc. in Greenville, S.C. to enable it to continue to operate even when the fire danger is high. Those locomotives are expected to arrive this fall.

With the acquisition of the four WP&YR locomotives and the new diesels from MPES, the D&SNG will have a dozen diesel locomotives on the property by next year. The railroad is currently planning to build a new shop next to the Durango roundhouse to maintain its new fleet. However, officials have said that while the D&SNG is purchasing diesel locomotives to have more flexibility, the former Denver & Rio Grande Western 2-8-2s that are the mainstay of its roster are not being replaced.

“Even with the purchase of these four WP&YR locomotives, steam will still reign supreme in Durango,” said Chief Mechanical Officer Randy Babcock. “As we place these units into service, we will assess our current fleet of industrial diesels, and determine how many of them are needed to achieve our goals. It is our strategic direction not to be a diesel-focused railroad, but rather maintain our place as the premier steam-powered heritage tourist railroad in the country now and well into the foreseeable future.”

Earlier this year, the D&SNG completed the restoration of K37 No. 493, one of the largest D&RGW narrow gauge locomotives ever built. As part of that restoration, the locomotive was converted to burn oil and the railroad has started to work on converting a second locomotive, K-28 No. 473.

The D&SNG’s new diesels from Alaska were built by MLW in 1969 specifically for the WP&YR’s mountainous territory. In the 1990s, the six-axle locomotives were sold and briefly used in South American before returning north at the turn of the century.