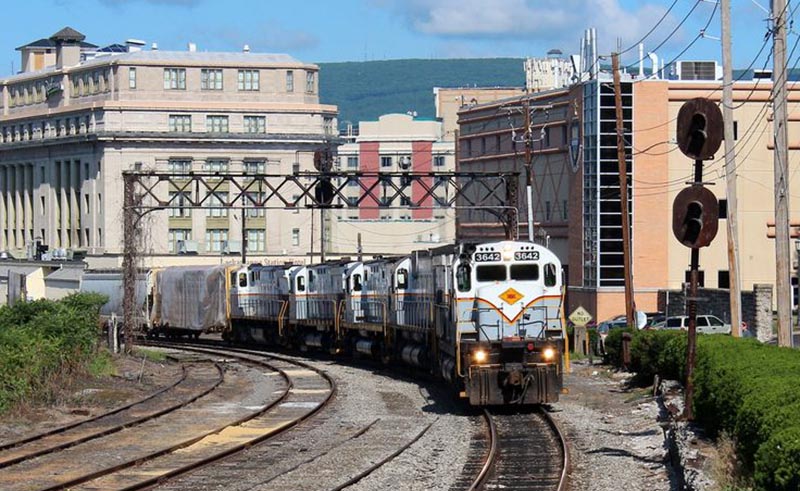 For the second time this year, the Delaware-Lackawanna Railroad (DL), a subsidiary of Genesee Valley Transportation, has been chosen for a prestigious freight rail industry award. On June 11, Norfolk Southern presented the DL with its Short Line of the Year award. In bestowing this honor upon the DL, Norfolk Southern identified the carrier’s operational and business development teams, respectively and collectively, for conscientious customer service and commitment to growth.

“Our partnership with the Delaware-Lackawanna Railroad has resulted in significant growth across multiple commodities and service improvements for both manifest and unit trains,” said Mike Moen, Norfolk Southern Senior Short Line Development Manager. “Their cooperation and efforts have contributed to a more efficient interchange and an improved service offering for our mutual customers.”

The recognition from Norfolk Southern follows the DL receiving the American Shortline & Regional Railroad Association (ASLRRA) Business Development Award for 2019. Presented at the organization’s annual conference, the ASLRRA award spoke to the DL’s boots-on-the-ground, one-carload-at-a-time growth strategy. This strategy has created traffic volume growth of 510% in the 25 years since GVT first came to the Lackawanna Valley. This quarter-century of growth could not have come to pass without the partnership between the DL and the Pennsylvania Northeast Regional Railroad Authority (PNRRA), rail trackage owner and regional authority with which the DL is the contracted operator.

“The public-private model forged in Northeastern Pennsylvania has become a model increasingly used across the United States to save rail trackage that has been abandoned and was being liquidated by private sector railroads,” said Larry Malski, PNRRA President. “The progress continues in Northeastern Pennsylvania, as evidenced by a 29% increase in carloads during the first four months of 2019 on this trackage.”

Genesee Valley Transportation is a privately-owned shortline and regional rail operator based out of Batavia, N.Y. Founded in 1985, GVT has grown from a five-mile spur in greater Buffalo to a 318-mile network of five subsidiary railroads in two states. Subsidiary Delaware-Lackawanna Railroad was launched in 1993, operating a portion of the former Delaware & Hudson Penn Division between Scranton and Carbondale, Pa., and a portion of the former Lackawanna Pocono Main Line between Scranton and Slateford Jct., interchanging with Norfolk Southern in Scranton, Pa.