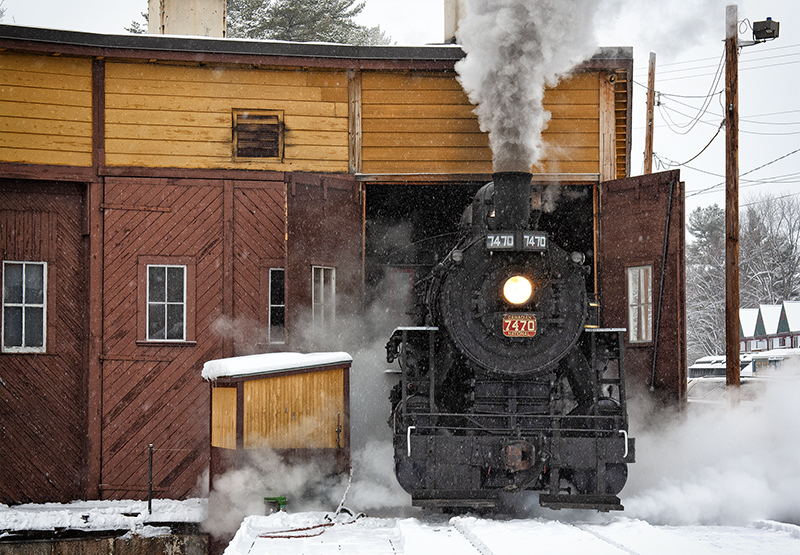 The Conway Scenic planned on using its Canadian National 0-6-0 on a pair of charters in January but mechanical issues have kept the locomotive in the shop longer than expected. CN 7470 is seen emerging from the North Conway roundhouse in January 2010. Photo by Justin Franz.

NORTH CONWAY, N.H. — Conway Scenic Railroad’s former Canadian National 0-6-0 will be under steam in the coming weeks, the railroad says, but uncertainty surrounding that return to service forced two charter organizers to cancel their plans.

CN 7470 was scheduled to lead the Massachusettes Bay Railroad Enthusiasts’ “Steam in the Snow” excursion on January 2, followed by a Pete Lerro photo charter on January 8 and 9. But both charter organizers decided to cancel their plans earlier this week after learning that the locomotive was still not back in service.

The news caused a stir on social media earlier this week, including on the Conway Scenic’s Facebook page and some groups dedicated to the New Hampshire tourist railroad.

“Lerro Photography canceled our planned photo charter due to the locomotive not being ready by the date in which we had to make a financial deposit,” Lerro wrote on social media. “I can’t expect my customers to make non-refundable travel plans when the locomotive is still having issues when I was told it would be running by November. With only three weeks to go, we can’t take that risk.”

Brian Solomon, manager of marketing and events for the railroad, said management understood why MassBay and Lerro opted to cancel their events, but that the railroad is still hopeful 7470 will be under steam in the coming weeks.

The locomotive — built by the Grand Trunk Railway at its Point Saint Charles shops in Montreal in 1921 — last ran in January during the 2021 edition of “Steam in the Snow.” This spring, however, during an inspection by the Federal Railroad Administration, two problems were found that would sideline the locomotive for much of the year. There were issues discovered with the locomotive’s springs as well as fractures in the tender trucks. Solomon said fixing either issue would normally not be a major challenge, but that a shortage of parts and labor has meant it has taken much longer than expected.

“We’ve been doing our best to get 7470 back on the road, but we also have to keep the rest of our fleet going,” he said, adding that the railroad presently only has one full-time shop employee but is looking to hire more. The railroad is also relying on contractors to work on the steam locomotive.

The railroad presently has about 20 full-time employees but Solomon said they could use eight or nine more. Solomon said the increased cost of living in the Mt. Washington Valley has added to the challenge of hiring more people. Despite those issues, he said the railroad had one of its busiest years ever in 2021.

Solomon said the issues surrounding the springs had been taken care of and contractors were turning their attention to the trucks next. The railroad believes the fractures have been in the trucks for years but notes that getting new trucks for a century-old locomotive is not easy.

Instead of recasting the trucks, the railroad plans on using a pair of trucks off an old coal hopper. The replacement trucks will not look completely accurate for the CN 0-6-0 but they will work until the money is secured to restore the originals.

Solomon said the trucks were being worked on this week and that they were optimistic that the locomotive would be under steam in the coming weeks.