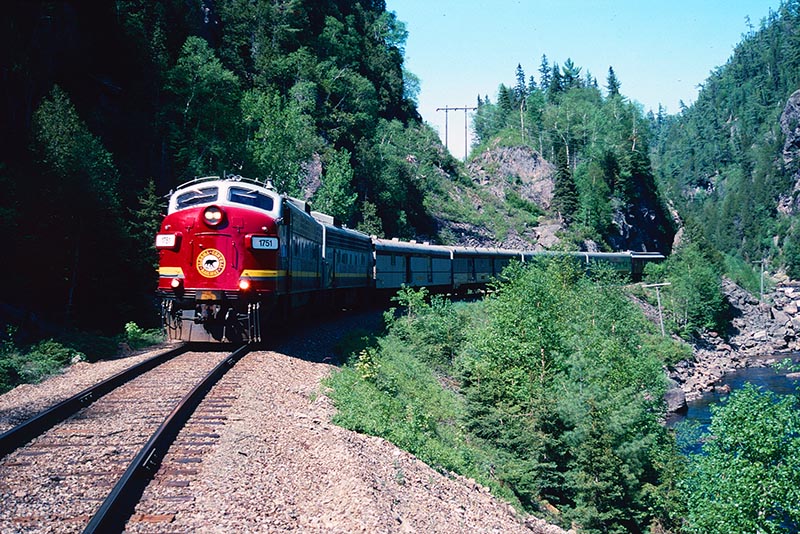 On June 9, 1997, Algoma Central Train 2, the Local, is just emerging from the gorge section of Agawa Canyon. Photo by Steve C. Bradley

MONTREAL — Canadian National is preparing to sell the former Algoma Central Railway in Ontario, according to media reports.

In July 2020, CN officials had indicated that they were considering selling off “non-core” lines in Wisconsin, Michigan and Ontario, including large parts of the Wisconsin Central. At the time, executives said that the decision was part of its continued push to implement precision scheduled railroading. Ghislain Houle, executive vice-president and chief financial officer, said that lower-performing routes would be better off in the hands of a short line or regional railroad and that the traffic those routes produce would still end up on CN’s main line.

In December, CN officials told the Manitoulin Expositor newspaper that it was in discussion with multiple potential buyers for the former AGR between Sault Ste. Marie and Hearst, Ontario, and that the process “is ongoing.”

CN has reportedly told tourism officials that the popular Agawa Canyon Tour Train will run in 2021. “We anticipate that train is going to be running next year, either with CN or a new owner,” Tom Vair, deputy chief administrative officer for the City of Sault Ste. Marie, told Soo Today.

CN purchased the WC back in 2001. The WC was formed in 1987 from a group of cast-off Soo Line routes and over the years added smaller carriers to its portfolio, including the Algoma Central, the Green Bay & Western and Fox River Valley Railroad.

Read about the Agawa Canyon Tour Train in the January 2021 issue of Railfan & Railroad!