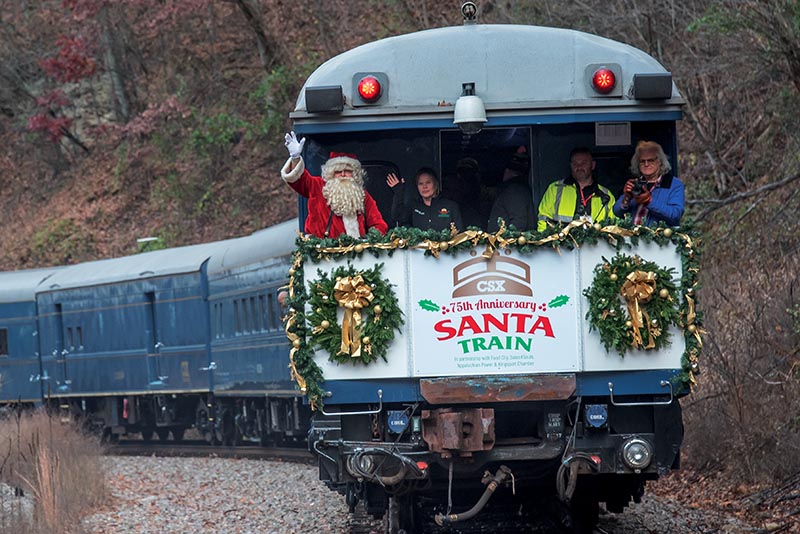 Country music and bluegrass legend Ricky Skaggs, far right, was the celebrity guest on the 2017 Santa Train. The big guy on the far left needs no introduction. Photo by Steve Barry.

KINGSPORT, Ky. — For the first time in 78 years, Santa is not coming to the mountain communities of Kentucky, Virginia, and Tennessee by rail. On Thursday, the organizers of the Clinchfield/CSX Santa Train announced that it would not be running the annual gift-giving train this November over concerns of spreading COVID-19. Instead, gifts will be brought to Food City grocery stores where people can safely pick them up.

For years, the train has gathered massive crowds along the former Clinchfield between Shelby, Ky., and Kingsport, Tenn. who gather at the rear of the train to get gifts. Started by the Clinchfield Railroad in 1943, it has continued in the post-merger world under CSX and is usually sponsored by the railroad, the Kingsport Chamber of Commerce, Food City, Appalachian Power, and Souls4Soles. Officials say they plan on giving out gifts in communities along the route on Nov. 21. Additional details will be posted on the Santa Train Facebook, Instagram and Twitter accounts in the coming weeks and months.

“Our goal every year is to spread Christmas spirit along the Santa Train route, and it’s now more important than ever that we honor that commitment for families who have come out every holiday season for 78 years,” organizers wrote. “Our team is already looking forward to seeing everyone from a safe distance this November.”