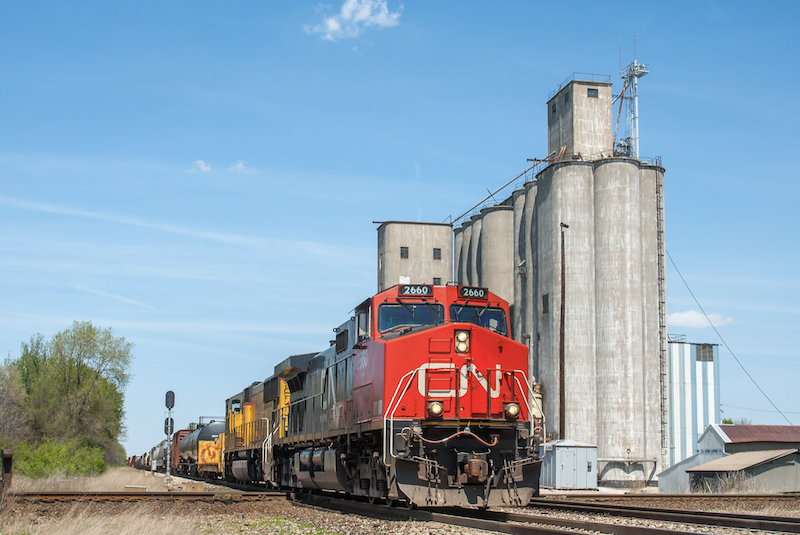 A Canadian National freight in Tuscola, Ill., in 2007. CN says it can make a superior offer for Kansas City Southern. Photo by Steve Barry.

MONTREAL — Kansas City Southern has announced that its board of directors will evaluate Canadian National’s surprise offer to merge.

On Tuesday, CN announced that it had made an offer to buy KCS for $33.7 billion. The offer came just a month after KCS and Canadian Pacific announce plans to merge and form the first railroad to serve the United States, Canada and Mexico. CN said it had a “superior proposal” and would pay more than the $29 billion CP is offering.

The news came in the form of a letter to the KCS board and a new website promoting the synergies between the two railroads.

CN officials were optimistic that the KCS board would see the value in its offer.

“CN is ideally positioned to combine with KCS to create a company with a broader reach and greater scale and to seamlessly connect more customers to rail hubs and ports in the U.S., Mexico and Canada,” said CN President and CEO JJ Ruest. “CN and KCS have highly complementary networks with limited overlap that will enable them to accelerate growth in single-owner, single-operator, end-to-end service across North America. With safer service and better fuel efficiency on key routes from Mexico through the heartland of America, the result will be a safer, faster, cleaner and stronger railway.”

The news that CN was making a move sent KCS stock skyrocketing on Tuesday morning, from $260 per share to more than $290.

After initially declining to comment on the matter, CP officials announced that CN’s offer was “illusory and inferior” and then gave a laundry list of reasons why it would never be taken seriously. CP officials said it would create the third-largest Class I and, unlike a CP-KCS deal that is an end-to-end merger, would create an overlapped system between the Upper Midwest and Gulf Coast, thus reducing competition. CP also accused CN of “over-promising and underdelivering,” noting that it was the worst-performing Class I when it came to shareholder returns in the last 10 years and that it had a subpar safety record.