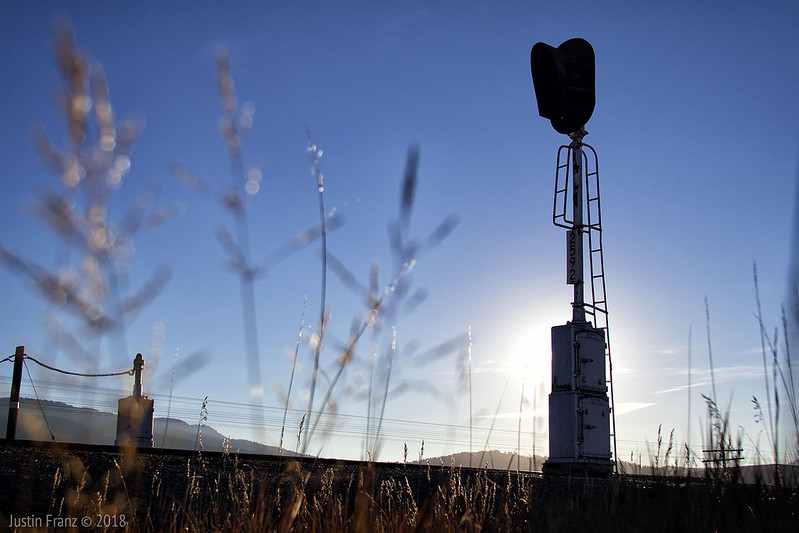 A Union Pacific automatic block signal stands guard on the south slope of Monada Pass near Humphrey, Idaho. Signals like this were once common across the entire UP system but in recent years they have been replaced with more generic types, washing away another example of what once made the railroad unique. Photo by Justin Franz.

I recently realized that Union Pacific might be one of my favorite railroads to photograph. That’s probably a bold statement — especially out west, where “Uncle Pete” has gobbled up more than a few beloved railroads — but let me explain. Through continued modernization and the countless railroad takeovers and mergers of the last 50 years, many of the things that make a certain piece of railroad unique have disappeared from the landscape. Old school signals that were once unique to a certain railroad have been replaced with generic, off-the-shelf models. But even the smaller, more overlooked details, are disappearing. Here in Montana, there are still traces of Great Northern and Northern Pacific, but every year the numbers continue to dwindle. Those old NP whistle posts made from locomotive tubes that could once be found on parts of Montana Rail Link? Relegated to the scrap pile.

Modernization is certainly evident on UP (and I’m talking about the original UP, not the former Denver & Rio Grande Western or Southern Pacific or whatever other predecessor roads you like), but you can still find a lot of lineside objects beyond the locomotives and cars that tell you it is UP. Along certain parts of the railroad, it’s still possible to find old signaling that dates back decades. Even though the telegraph lines (long an annoyance to photographers but nowadays a rare sight) have likely outlived their usefulness, you can still find them along the main line and many still have white metal bands wrapped around them to mark quarter-mile distances between mileposts, another unique part of the UP landscape. At many depots across the system, you can still find the road’s iconic shield chiseled in stone. And, in a few spots (I know of at least one in Echo Canyon, Utah), you can find old flatcars turned into bridges with “Route of the Streamliners” painted on the side. 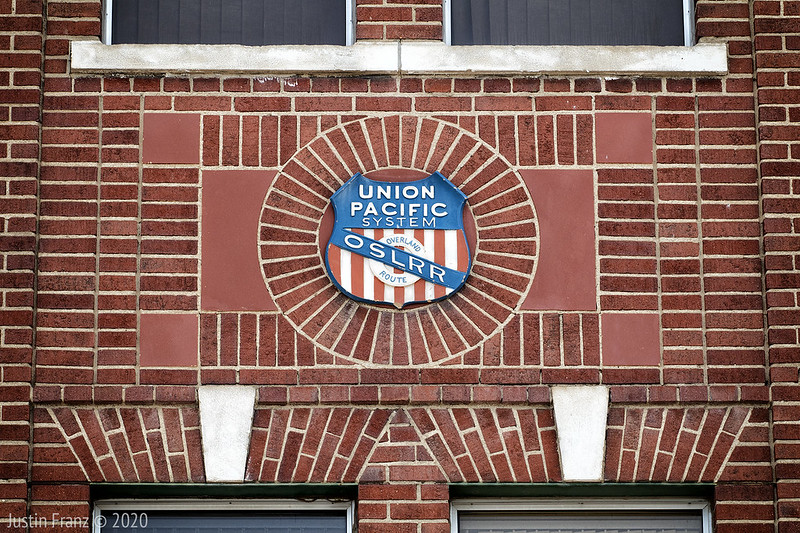 In Pocatello, Idaho, there’s no denying that Union Pacific is the hometown railroad as seen in this shield on the side of the depot downtown. Photo by Justin Franz.

So why am I writing about this in a column dedicated to railroad photography? A recent trip to Utah, Idaho, and Wyoming reminded me of the importance of capturing more than just the locomotives and cars that populate the railroad landscape. To effectively record history and tell a complete story about the railroad you’ve set out to photograph, you have to capture images of the little details that make that operation unique — the signals, the signs, and more.

Railfan & Railroad contributor Dennis A. Livesey has been shooting New York City’s subway system for years and one of my favorite parts of his work is that he shoots the entire system — not just the subway cars. “I look for the details down below, the details that, when they are put together, tell a story,” he said. “That can be as simple and as basic as ‘My Trip on the Subway.’ Show me the stairs from the street, and the turnstiles as your hand pays the fare. Show me the map or arrows that point to the trains you need to take and the train rushing into the station. And then the big prize — the crush of humanity that is a subway car in a big city.”

Scott Lothes, executive director of the Center for Railroad Photography & Art and another accomplished photographer, has focused on a number of regions or railroads over the years, most recently the railroads of Switzerland. Lothes said he has always been interested in the railroad landscape, especially here in North America, where a major characteristic of railroading is covering great distances. To tell that story, big landscape shots are necessary. The same is true in the mountains of Switzerland, but Lothes also keeps an eye out for details that are unique to the railroads there, things many of us might overlook. For example, most of the rail lines in Switzerland are electrified, and so Lothes has photographed the dams and generating stations that power the railroad, even if they are not within sight of the tracks. “The transmission lines, the generating stations, it’s all part of the railroad landscape there,” Lothes said. I kept an eye out for similar details while on a trip to the Deseret Power Railroad in Utah and Colorado, including the high-voltage warning signs, something you would never see along other freight railroads. 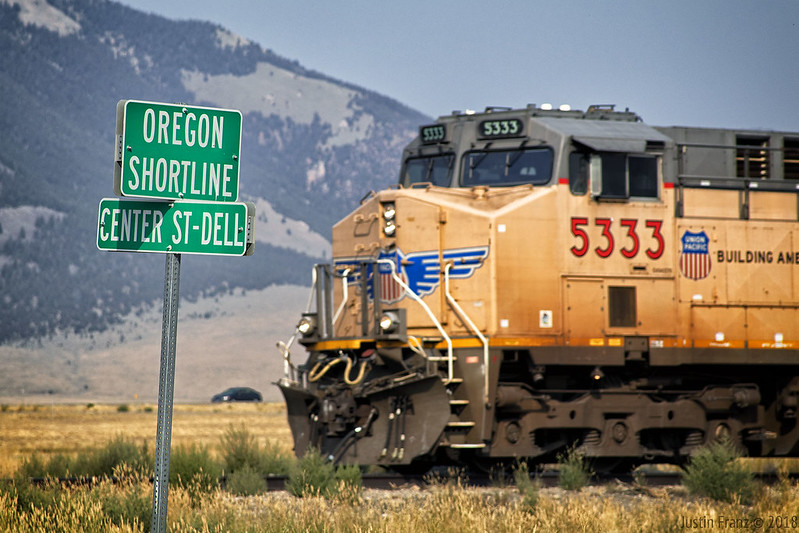 In downtown Dell, Montana, you can drive down ‘Oregon Short Line,’ named after the company that built the Union Pacific’s Montana Subdivision. Photo by Justin Franz.

Signs, signals, and substations are details I look for when I’m out shooting because they help tell a complete story. (That is particularly important when considering what photos to submit with a feature story to your favorite railroad magazine. P.S.: We’re always looking for submissions.) It’s also a great way to kill some time between trains. On one of those recent trips to the UP main line, my hopes of a busy day trackside were dashed by a derailment in Wyoming that meant most trains were parked. Nonetheless, the day was not wasted as I roamed Echo Canyon looking for details about the railroad that was and is.

Looking for the details that make up the railroad landscape isn’t a particularly groundbreaking idea, but sometimes it’s good to remember that railroading is about a lot more than locomotives and cars. Next time you’re trackside waiting for a train, train that camera on something different. When those signals, signs, and stations are gone years from now, you’ll be glad you did.

This article appeared in the September 2020 issue of Railfan & Railroad. Subscribe Today!