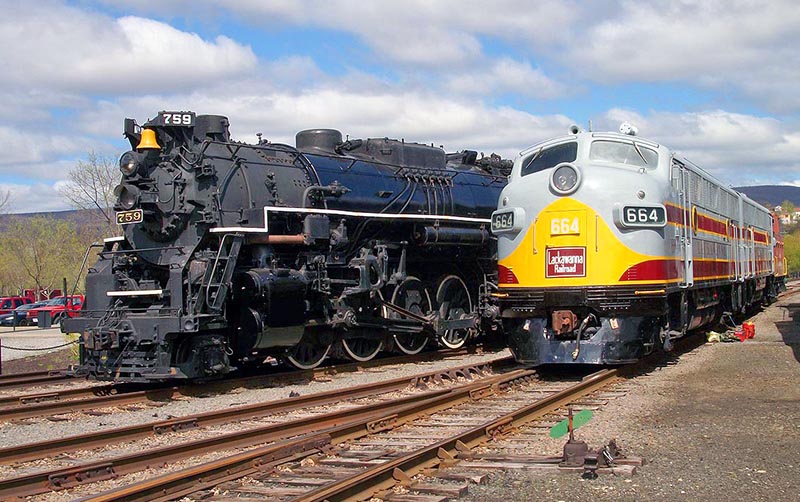 The dilema of exposing for “full daylight” revisited: How to get an exposure that will bring out the details of both the very dark steam locomotive and the very light diesel, all while trying to keep the sky and foreground balanced as well? Trust your light meter or your gut instincts? This throwback scene was recorded at Steamtown NHS on April 30, 2011. —Photo by Otto M. Vondrak 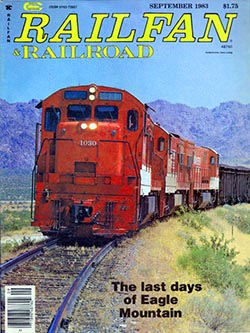 My commentaries on full bright daylight exposures and the relative differences between cameras in the March 1985 issue brought some mail that deserves some airing. One in particular comes from a New England reader who seems fairly typical.

“Concerning Boyd’s comments in the March Camera Bag on ‘full daylight,’ I find definite disagreement with him. I have always used my meter on sunny days and trusted it. I have used a Nikon FM for five years now and have been shooting slides since my Kodak Pony in 1951. Generally, I probably get the same readings as you do, but I don’t keep records. You forget that if the sun is high and the trucks shaded, or if the sun is head-on to the unit, you have to make allowances and open the camera a stop, regardless of what the meter says.

“As for cloudy days, I am far apart from your views. I use my meter but have found I have to open the meter a full stop or the slides come out a little dark. This, of course, can vary. I don’t trust my meter on cloudy days — most fans who trade don’t shoot on those days, if possible, because cloudy day shots are not good for trade material. Also, why use a shutter speed of 1/500th on an overcast day? I think a lower speed is advisable.”

Unless you really understand what that meter is doing, you’re better off to know what full bright daylight is and judge for yourself what other factors will affect the exposure — for instance, if you’re going to shoot a shiny Amtrak train against rich green trees, your light reading against the trees would likely call for a more open exposure than the shiny silver train, but at 70 mph, getting both the exposure reading and the photo of the passing train requires much quicker reflexes than I’ve got. So why not put the camera on a full automatic or program mode? If you can give your camera a shutter-priority setting in an automatic or program mode, that might not be a bad idea, but you are taking a chance. Sunlight reflecting off the windows or sides can throw off the exposure by compensating too much for a brief highlight. If you want to see what a continuously-reading meter will do to you, watch some 8mm movies shot with an automatic camera and observe how the exposure changes — a steam locomotive makes the best example, as the camera opens up wildly as the engine passes to compensate for the dark machinery.

The purpose of a light meter is control, but you have to know what that light meter is doing to be able to properly use that control. Since writing that March Camera Bag, I have been taking particular mental note of how much I was using my meter and what the results were. In retrospect, I find that I can use the meter in full daylight situations with a bit more accuracy than I had been comfortable with before — what I mean is that the meter was closer to my “full bright” estimates more often than I would have suspected, and the deviations were less extreme than I was afraid of. In late afternoon work — beginning about four hours before sunset — I began to ride the meter closely on a recent chase of a dark green ex-Adirondack RS3 on the Susquehanna north of Binghamton, N.Y., and the results were truly spectacular for consistent proper exposure. On the few instances where the train was standing still, I bracketed the exposures to see how much variation there was between my estimates and the light meter with subtle changes in the “aiming” of the meter. The metered results were quite good, and they improved over my estimates as the sun began to go down and the light measurably diminished.

As for totally grubby weather, I’ve never worked in worse midday conditions than were present at this year’s Cass Railfan Weekend, with driving rain and 1/30th at f2 at 11:00 am. along the Greenbrier River. The light meter did its job perfectly, and in the bright noonday rain (the light was up to 1/125th at f2.8 by then), the shots on the last photo runbys of the Western Maryland Shay no. 6 produced some of the most beautiful Kodachrome 64 shots I’ve ever gotten at Cass with the wet green hills and steam hanging in the valley above the shiny black Shay that revealed its most minute details in the soft light — that engine in bright sunshine becomes a hopelessly black hole surrounded by an otherwise properly exposed world.

I think where my photography differs from our New England letter-writer is that he seems to tailor his photography to slide trading, while I tend to concentrate more on scenic and action views — and each will require its own approach. The roster shot traders will want nearly perfect light on a generally static subject; good depth of field, low shutter speed, careful bracketing of exposures and attention to detail in the shadows became quite rightfully important — and the subject is usually standing still long enough to be carefully light metered. Action photography, on the other hand, requires that you be able to handle fast-moving subjects and can envision the exposure changes that the arrival of the train into the scene will create (our silver Amtraker against the green trees, again).

He asks, “Why use 1/500th on an overcast day?” If the subject is standing still, you don’t need to, but an Amtrak train at 70 is a real problem at any speed less than that regardless of weather. On my NYS&W chase, in the late afternoon sun I had to back off to 1/250th at f4 with my zoom at about 80mm for a reflection shot in a pond surrounded by trees, even though the train was in full sunlight; the exposure was absolutely perfect, but in the nearly broadside view, I could detect a slight motion blur in the 30 mph train that wouldn’t have been there if I could have gone up to 1/500th.

The most blissful photographers among us are those who have a good camera and a little bit of basic knowledge; their results will be generally good, sometimes awful and occasionally brilliant. The ill-equipped amateur will be frustrated. And the pro who knows how risky and fragile the whole process is will be as nervous as a long-tailed cat in a room full of rocking chairs — but will come up with consistently superior results.

This article appeared in the September 1983 issue of Railfan & Railroad! Subscribe today!