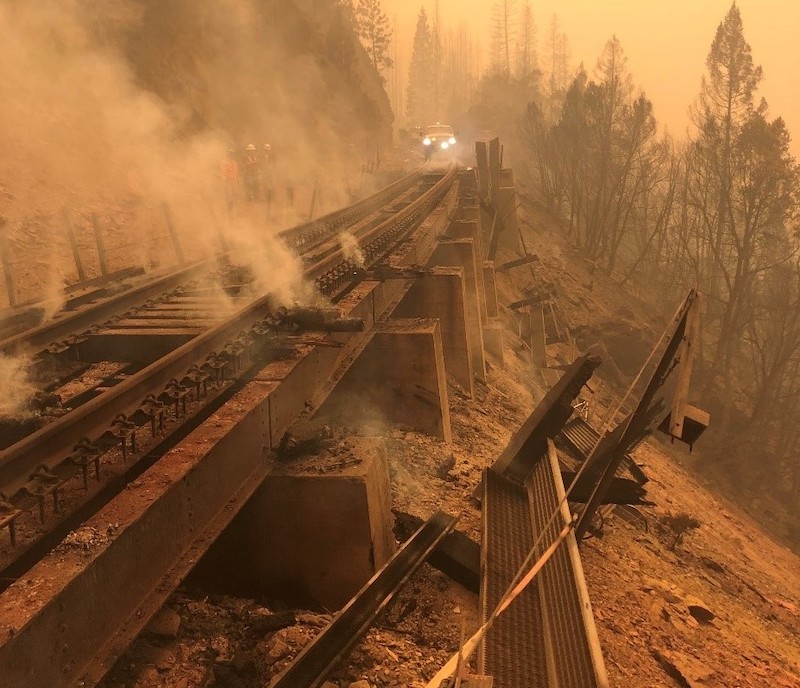 The Dixie Fire near Keddie has burned nearly a quarter-million acres and is only 24 percent contained. Photo Courtesy of BNSF.

KEDDIE, Calif. — BNSF Railway’s main line through Northern California has suffered “significant damage” because of a wildfire that has forced thousands of residents to flee the area.

The Dixie Fire has burned nearly 250,000 acres in the Feather River Canyon, not far from the iconic Keddie Wye. The fire has snarled operations for both BNSF and Union Pacific, forcing both railroads to detour trains around the area.

According to BNSF, the fire has already burned some bridges on its line between Almanor and Keddie, Calif., and it continues to threaten other pieces of infrastructure.

“The Dixie Fire is only 23 percent contained and the forecasted weather conditions are currently unfavorable, which will likely drive increased fire activity into the weekend. BNSF has two fire trains deployed to the area, and they have been active in applying water and other retardants to prevent further damage to structures. Our teams are working closely with CalFire crews in these suppression efforts, with safety always the highest priority,” the railroad wrote.

The railroad also told customers that it was unclear when normal service might resume. Union Pacific is also warning customers that traffic could be disrupted for several weeks.

Fires were already impacting rail operations across the region this month. Union Pacific’s Black Butte Subdivision in California will remain closed until at least mid-September while the railroad repairs a large bridge that was heavily damaged in a wildfire in late June. And in British Columbia, Canadian National and Canadian Pacific operations were impacted by a massive fire that destroyed a small town. That same fire also heavily damaged a CN bridge.