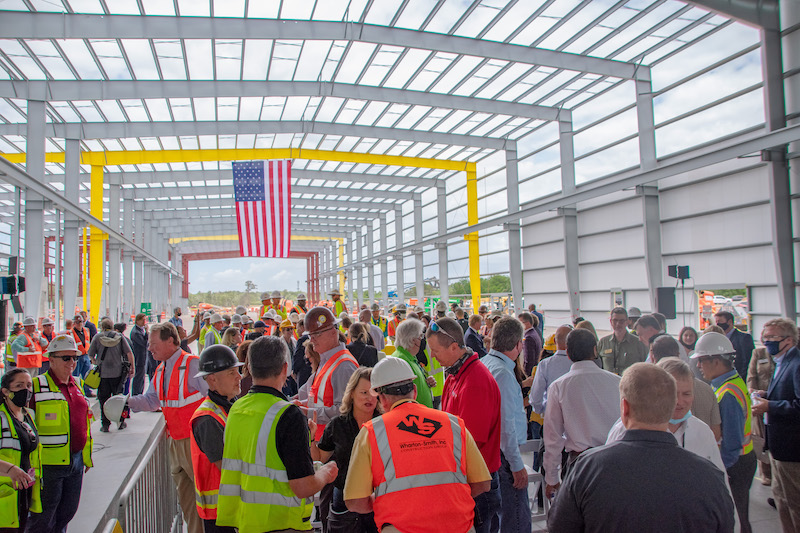 Brightline held an event at their Orlando Vehicle Maintenance Facility to celebrate the halfway mark on the construction of their expansion. Photo by Austin Strenecky.

ORLANDO — On May 19, Brightline held an event at their future Orlando Vehicle Maintenance Facility to celebrate the halfway mark of construction on their expansion to Orlando.

Brightline is currently in the midst of building a new route to Orlando as an extension to their existing route in South Florida. In the process, they are double-tracking the Florida East Coast Railway main line between West Palm Beach and Cocoa. Between Cocoa and Orlando, Brightline is building an entirely new line following the route of State Road 528. As part of this work, Brightline is building 48 bridges and three tunnels on the 170-mile corridor.

Speakers at the event included Brightline CEO Michael Reininger, Brightline Florida President Patrick Goddard, executive vice president of infrastructure Michael Cegelis, Orange County Mayor Jerry Demmings, Orlando Mayor Buddy Dyer, and Greater Orlando Aviation Authority Board Chairman Carson Good. They all spoke about the economic benefits Brightline is bringing to Central Florida, the jobs being created both during construction and once service begins, and about the importance of Tampa in their future plans for connecting the state with rail service. They finished by signing a ceremonial rail that will eventually be installed at the facility.

The event was held at their future Vehicle Maintenance Facility, which is located on the southern portion of Orlando International Airport’s property. It will be the home base for the trains once service to Orlando begins. The main building will have three through tracks, a locomotive shop and a truck shop. Outside, there will initially be two storage tracks with room to add an additional six. A wheel truing machine and a train wash will also be built. It will also house a biodiesel fuel farm. Currently, crews are erecting the building’s frame with the first sections of siding and roof installed.

So far, work on the Orlando line has been primarily focused on clearing the route and bringing in fill to build up the right of way as well as starting the bridges and tunnels. Track is beginning to be laid at Orlando International Airport headed east from the station. This section of the line will eventually support speeds of up to 125mph.

Along the Florida East Coast Railway, crews have been working to lay the second mainline. At one time, the FEC had been double tracked but that was removed in the 1970s so crews are essentially relaying it today. Crews have also been upgrading the 155 crossings on the route to add the second track. This shared corridor will support passenger speeds of 110mph and will also allow freight speeds to be increased.

To see more on the construction of Brightline’s route, check out The Roaming Railfan’s series documenting the progress on YouTube. 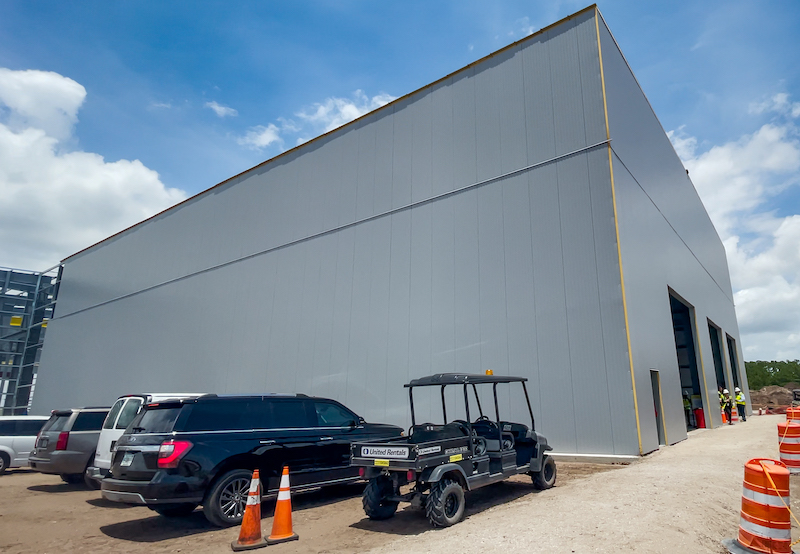