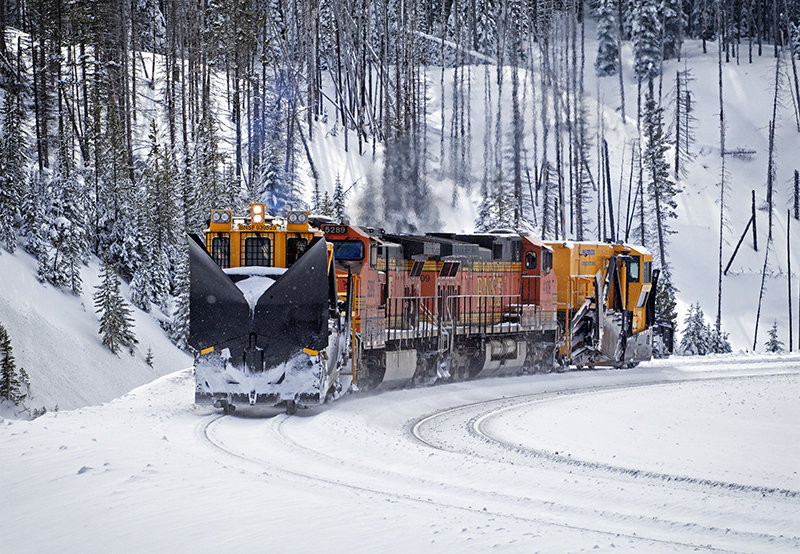 A BNSF Railway plow train nears the summit of Marias Pass on Feb. 24, after clearing debris from avalanches that were triggered earlier in the day. Photo by Justin Franz.

On Sunday night, the railroad’s Hi Line Subdivision — its primary route to the Pacific Northwest — was blocked east of Essex, Mont., due to an avalanche that covered both main line tracks with snow. On Monday, it reopened the line but the threat for additional avalanches remained so on Wednesday it shut down the railroad to trigger slides and eliminate the problem.

Because BNSF’s main line runs along the southern edge of Glacier National Park — where nearly all of the avalanches that can impact the railroad begin — special precautions have to be taken when mitigating the avalanche risk. While other railroads can use explosives to triggers slides whenever they deem fit, BNSF must receive permission from the National Park Service. Instead of using explosives, BNSF usually uses what is called a “daisy bell” suspended from a helicopter that shoots pressure waves to trigger the slides. This was the first time since 2017 that the railroad was given permission to mitigate the avalanche threat on Marias Pass.

Starting at 10 a.m., both U.S. Highway 2 and the railroad were closed while blasting occurred east of Essex. Shortly after 1 p.m., both the highway and the railroad were reopened and BNSF dispatched a Jordan Spreader to clear any snow that may have impacted the right-of-way. By evening, freight traffic had resumed along the corridor.

While winter is always challenging on Marias Pass, the 2020-2021 season is turning into a notable one for BNSF. Earlier this month, the railroad had to dispatch its “Snow Coach” to help deliver crews to trains due to unsafe road conditions. In 2019, BNSF restored two former Santa Fe Hi-Level coaches and two baggage cars for the service on the Northwest and Montana Divisions. Earlier this week, the passenger train was out again ferrying crews over Marias Pass. 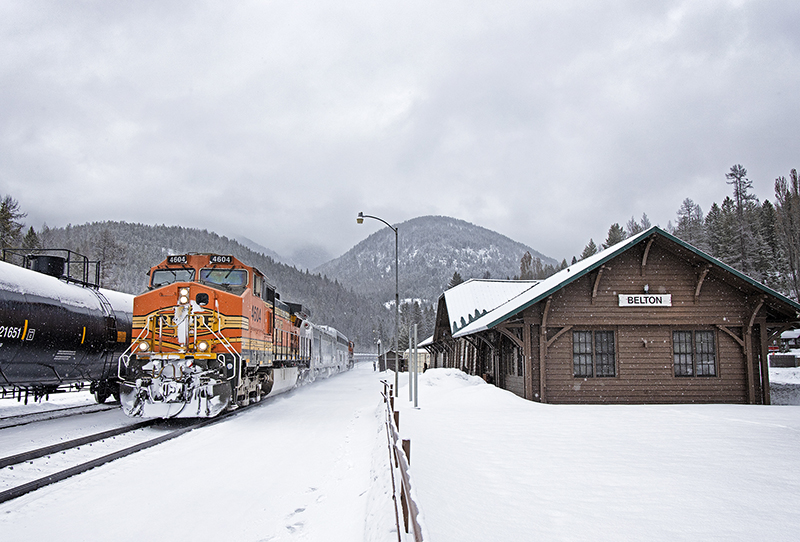 On Tuesday, a BNSF Railway “Snow Coach” passes through West Glacier (Known on the railroad as Belton) after dropping off train crews. Photo by Justin Franz.