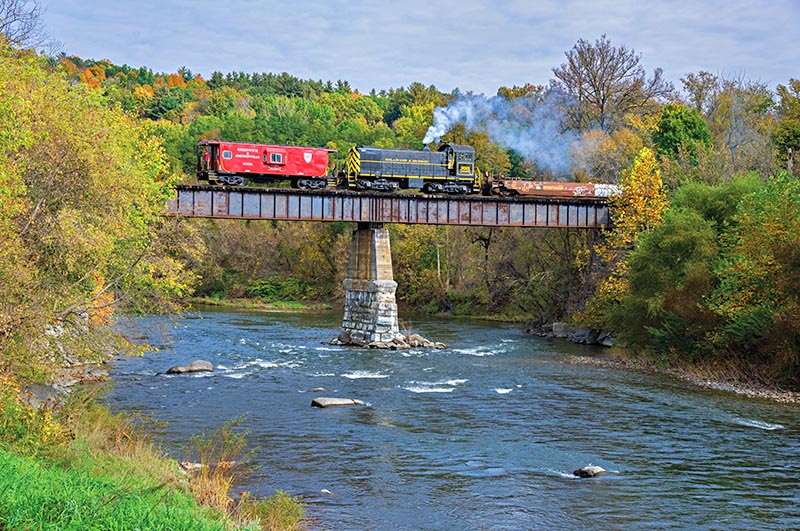 The high deck bridge over the Hoosic River at Eagle Bridge, N.Y., is one of the most spectacular scenes on the Batten Kill Railroad. A delightful autumn morning becomes even more so as Alco S-2 3021 makes a show-stopping appearance on October 14, 2021. —Ken Karlewicz photo 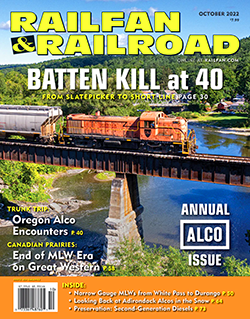 by Ken Karlewicz/photos as noted

The low-hanging clouds gather above the lazy Hoosic River as an Alco S-2 switcher and caboose, both in Delaware & Hudson-inspired paint, shove back across the high deck bridge and into the small interchange yard at Eagle Bridge, N.Y. Standing along the river, you could almost convince yourself that you’ve fallen into a time warp and that it’s 1961. It’s a scene that could have been shot by legendary Northeast railroad photographer Jim Shaughnessy. You could convince yourself that D&H still rules these rails and that this hard-working S-2 is delivering another cut of cars to Boston & Maine.

But it’s actually 2021 and just another day in the life of New York’s Batten Kill Railroad. Riding the rear of the shove is railroad President Bill Taber, counting cars to his engineer on the radio, undistracted by the spectacular view and cool waters running below him. You won’t find many railroad presidents working the ground like this, but Taber isn’t like most railroad presidents. When there’s work to be done, he’s out in the field just like the rest of his crew trying to serve the industries of Washington County. Taber’s motto is, “Never keep a customer waiting for a car that’s within our reach.” 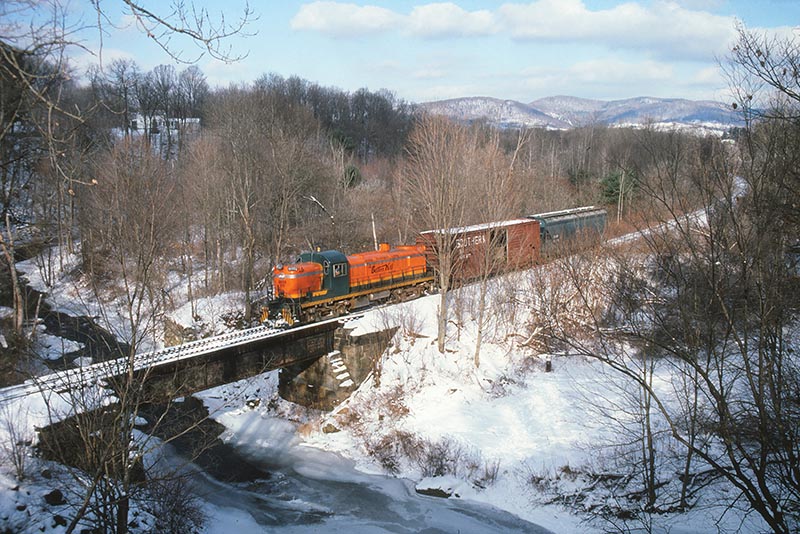 ABOVE: On a crisp winter morning in December 1985, BKRR 605 slips southward with a modest two-car freight contrasting beautifully with the snow-covered Washington County hills looming to the north. —Ken Karlewicz photo

Bucolic Washington County, a place that once inspired Shaughnessy and renowned painter Grandma Moses, is the setting for one of railroading’s most improbable short line survivors. Forty years after these lines were given up for dead, Batten Kill is surviving — if not thriving — in the modern age. And it’s doing so with a fleet of historic Alco locomotives built just a few valleys over in downtown Schenectady.

History
The roots of the railroad stretch back to 1870 and the opening of the original Greenwich & Johnsonville Railroad, which connected its namesake Greenwich with Johnsonville station on Troy & Albany Railroad (which later became part of Boston & Maine). A seven-mile extension west from Greenwich to another connection with B&M at Schuylerville opened in 1903. In 1906, neighboring Delaware & Hudson purchased majority control of G&J, operating it as a subsidiary, an arrangement that would last until the end. 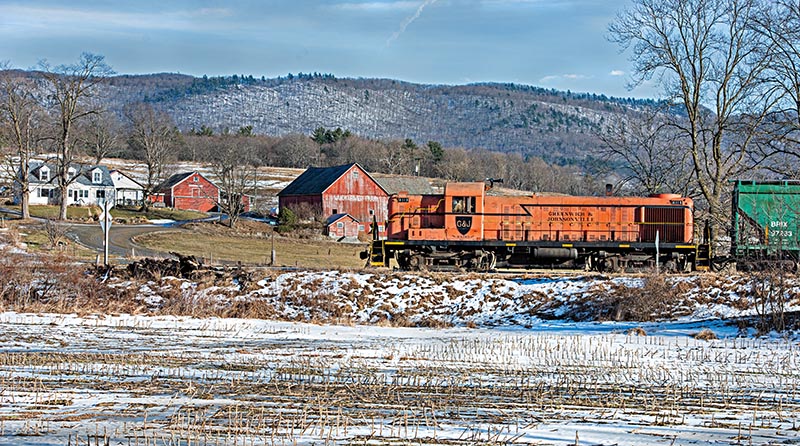 ABOVE: A late afternoon northbound train approaches Shushan from the south, passing the Windy River Farm (“Pooks”) with 10 loads in tow and a railfan entourage in hot pursuit. The afternoon temperatures are just cresting 40 as the five o’clock shadow begins to show on February 2, 2022. —Ken Karlewicz photo

A branch east from Greenwich to Salem was completed in 1907, financed by D&H. The effects of the Great Depression forced the abandonment of the original line between Greenwich and Johnsonville in 1932, with traffic diverted to the D&H Washington Branch between Eagle Bridge and Greenwich Junction, and north to Castleton, Vt. The local train that worked these branch lines was nicknamed the “Slatepicker.”

The 1970s were challenging times for railroading in the Northeast. By 1975, deferred maintenance and frequent derailments became the norm on the old G&J. Major customers, such as the paper mills in Greenwich and Thomson, had closed. D&H first proposed abandoning both G&J and the Washington County Branch in June 1980, and embargoed all traffic on the line on November 15, 1981, due to track conditions. It seemed the last chapter was written when the crew cleared out the last remaining cars on November 17, using G&J Alco RS-3 4116. 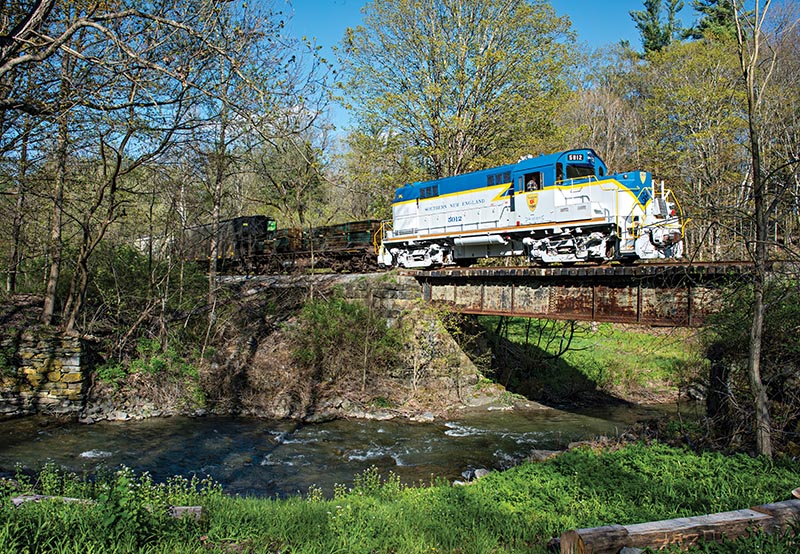 ABOVE: Southern New England RS-36 5012 approaches the interchange at Eagle Bridge, crossing Owl Kill with a southbound freight in May 2020 (“kill” is a Dutch word for “creek”). The afternoon sun helps bring out the greens that are exploding across the rural Washington County landscape. —Ken Karlewicz photo

Enter Ronald E. Crowd. Crowd grew up in Virginia, taking in the last gasps of steam action on Pennsylvania Railroad’s lines on the Delmarva Peninsula. His dream was to work for the railroad, but a bout of childhood polio diminished his mobility. He later relocated to New York to pursue education and a career, eventually moving to Schenectady and taking a job with the New York State Department of Transportation as a draftsman. At the time, railroads were shedding unprofitable branch lines, with many being picked up by new operators. Knowing of his passion for railroads, one of his colleagues jokingly told Ron he should consider picking up one of those lines and starting his own railroad.

While the comment was intended as a joke, Ron gave it considerable thought, and two weeks later founded Mohawk-Hudson Transportation. Named for the parallel river, the new Batten Kill Railroad was incorporated on October 1, 1981, with the first train over the line on July 8, 1982. This garnered a great deal of attention for the new short line as it became the country’s first railroad owned by an African-American, and the fulfillment of Crowd’s life-long dream to work for the railroad…

Read the rest of this story in the October 2022 issue of Railfan & Railroad. Subscribe Today!