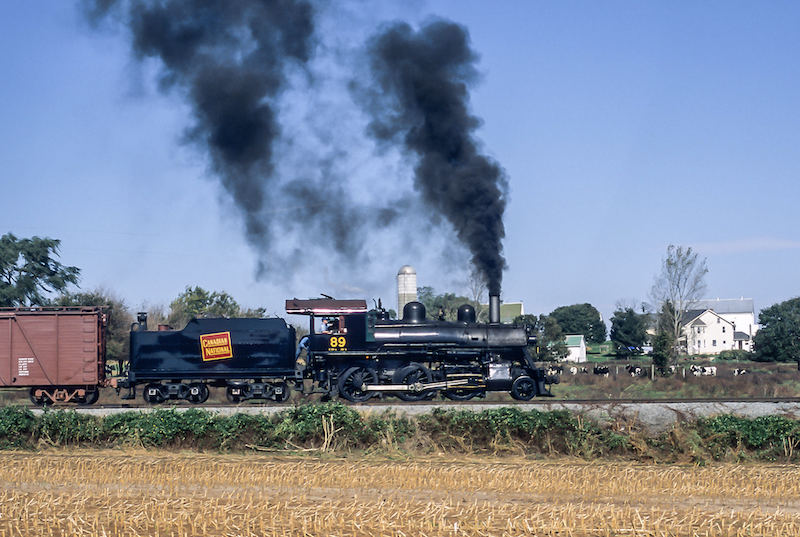 In October 2003, a remarkable string of photography-oriented steam (and one diesel) trips were held all across the U.S. This led editor Steve Barry on a nearly coast-to-coast steam safari that included photographing everything from narrow gauge to a Shay to a massive 4-8-4. In all, 11 days of shooting were crammed into a 14-day window. As editor emeritus Jim Boyd said to Steve at the conclusion of the events, “You did in two weeks what it took John Krause to do in 20 years.” It all started in Colorado on Durango & Silverton Narrow Gauge… 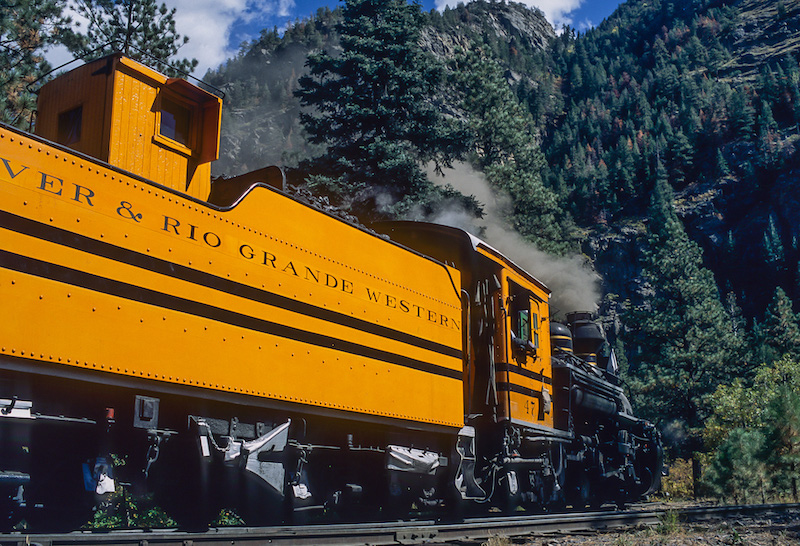 The string of events started with a trip sponsored by Trains Unlimited Tours on Durango & Silverton Narrow Gauge. Three-foot 2-8-2 473 had been restored to its 1950s “Bumblebee” look and powered a trip from Durango to Cascade Wye in Colorado. 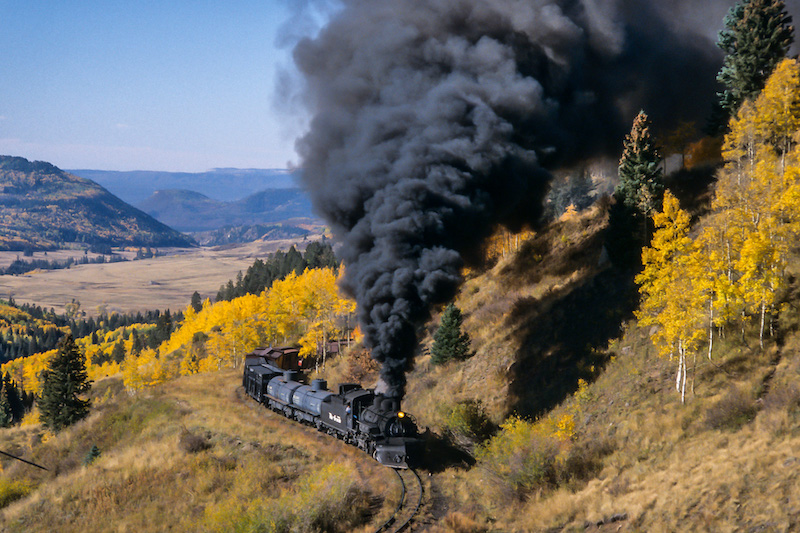 For the next two days, Trains Unlimited Tours sponsored a trip on the Cumbres & Toltec Scenic between Chama, N.M., and Antonito, Colo., using narrow gauge 2-8-2 487. On the first day, the train climbed the steep grade from Chama to the summit of Cumbres Pass, leaving the valley far below. 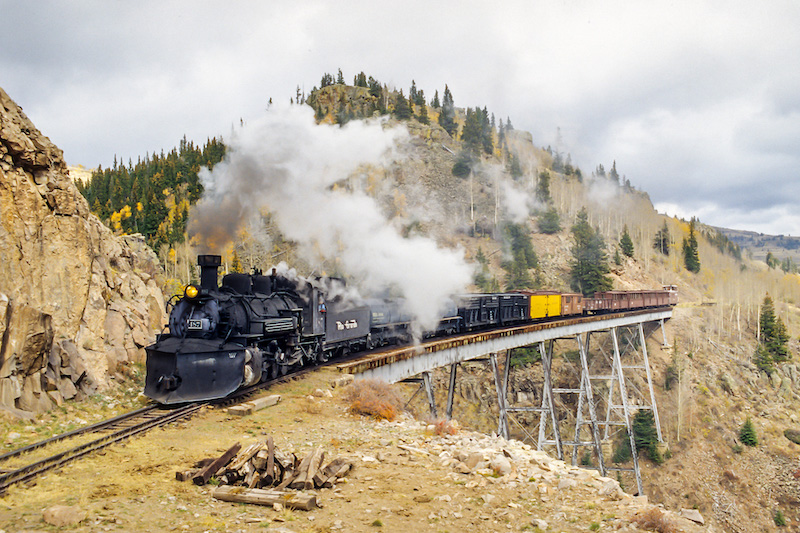 The second day of the tour on C&TS had the train heading back west, crossing Cascade Trestle on its way back to Chama. 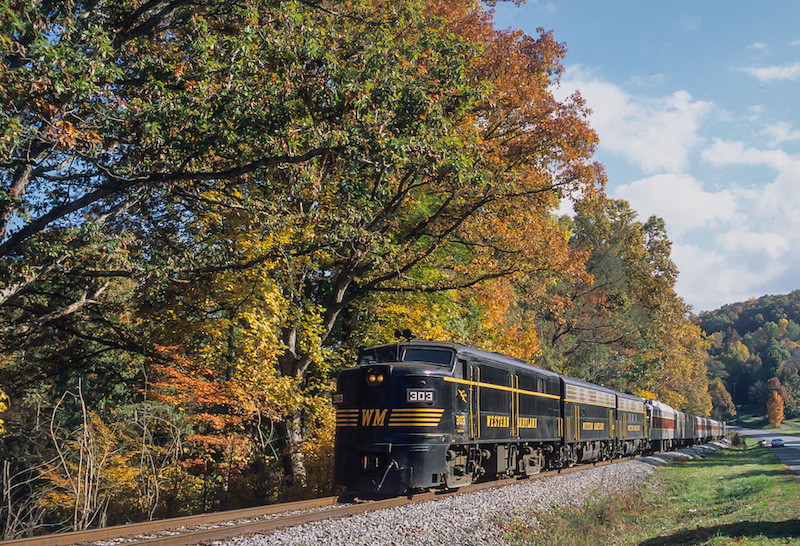 After a day driving to Denver, flying to Allentown, Pa., and then driving to Elkins, W.Va., it was time for a diesel interlude. Western Maryland FA 303 rolled through the fall foliage on the West Virginia Central on a trip sponsored by Carl Franz. 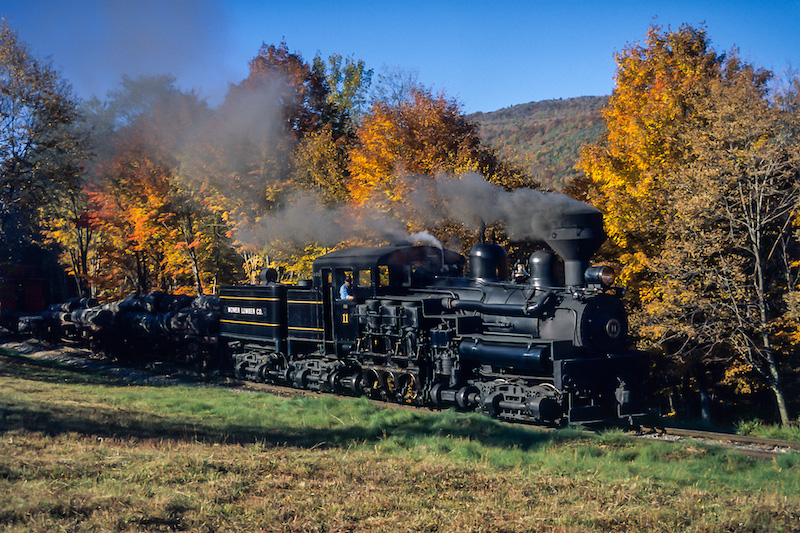 The next day it was back to steam Carl Franz sponsored a trip at Cass Scenic Railroad. Shay 11 powered a log train to the top of Bald Knob, the second-highest mountain in wild and wonderful West Virginia. 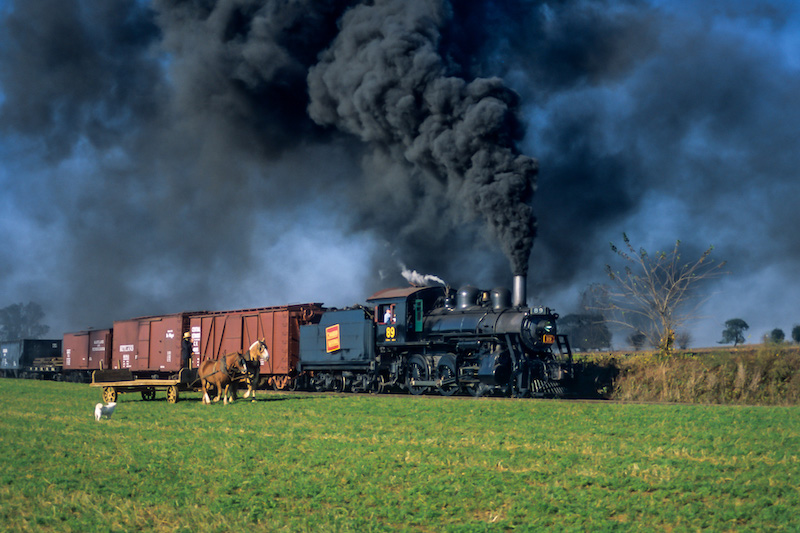 The Road to Paradise was up next, as Historic Transport Preservation (HTP), with John Craft organizing this day’s activity, heading to Strasburg Rail Road in Pennsylvania. Canadian National 89, a trim 2-6-0, looked right at home on the short freight train as it recreated its days working Ontario branch lines. 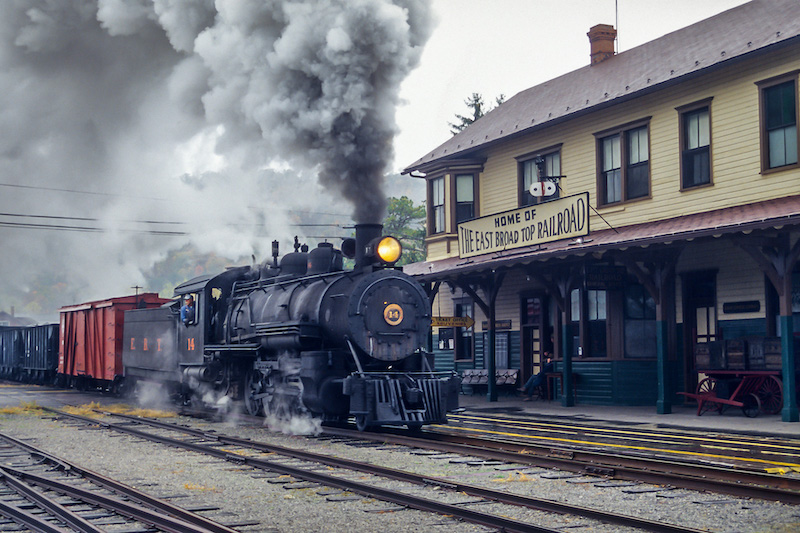 HTP had a second day of trips, this one at East Broad Top in Orbisonia, Pa., with the day directed by Jim Gunning. Damp weather marred the day, but narrow gauge 2-8-2 14 provided entertainment for the morning as the days of the coal-hauling EBT were recreated. 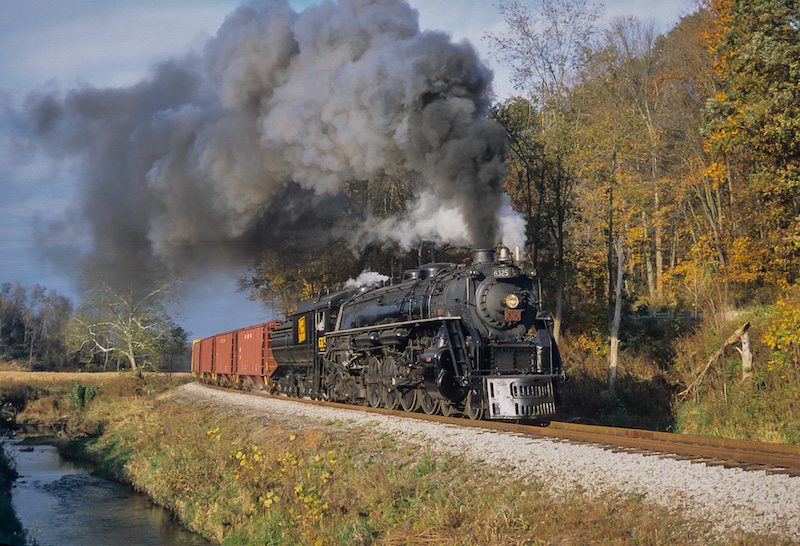 Ohio Central held two days of photography under the direction of David Goodheart, with Grand Trunk Western 4-8-4 6325 providing the power. The day concluded with numerous photo runbys at Baltic, Ohio. 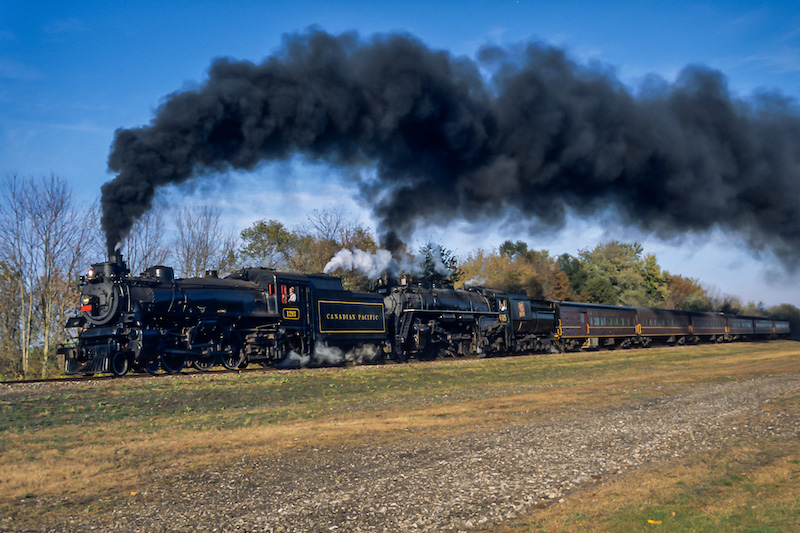 On the second day of Ohio Central photography, 6325 was joined by Canadian Pacific 4-6-2 1293. The two teamed up for a double-header at Trinway, Ohio, to conclude the two days. 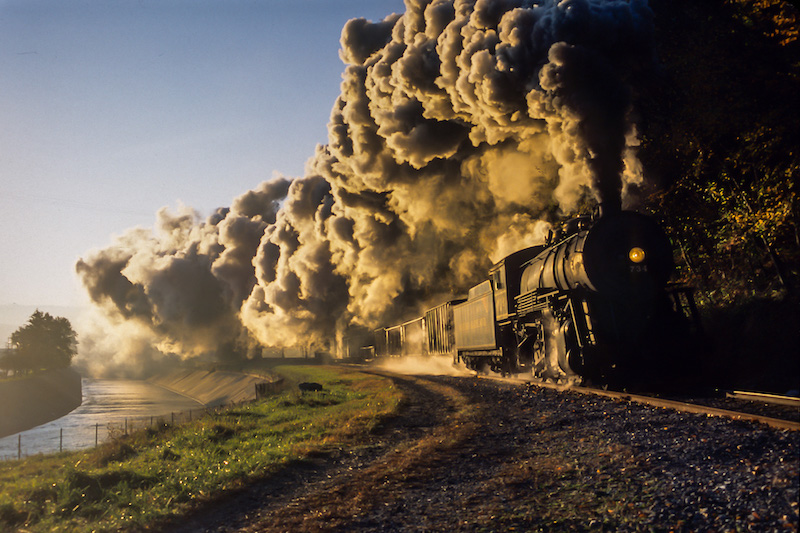 Western Maryland Scenic was the site of the last two days of photo specials. Carl Franz sponsored trips featuring Western Maryland 2-8-0 734 running between Cumberland and Frostburg, Md. The trips got off to a spectacular start at sunrise of the first day as 734 led the train at City Junction in the Cumberland Narrows west of town. 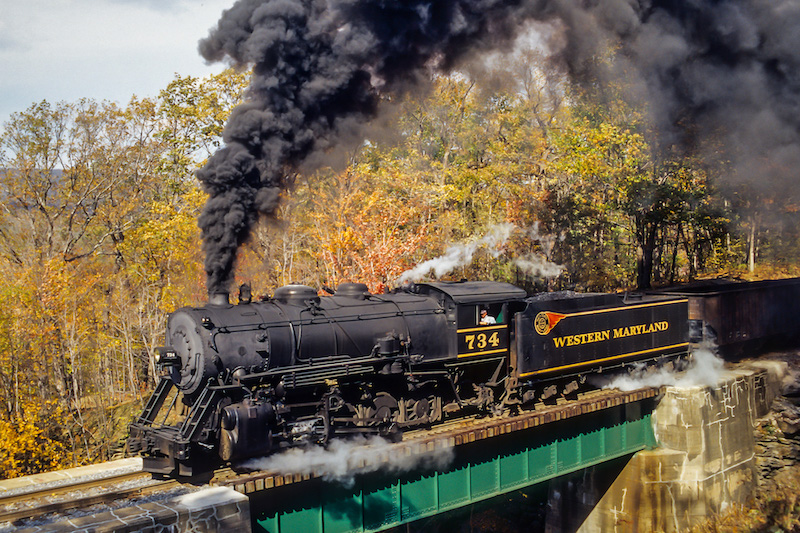 The final day of steam trips was on Western Maryland Scenic, with WM 734 approaching Frostburg as it crosses C&P Bridge 2. WMSR trains travel mostly on ex-WM trackage, but the final two miles are on the old Cumberland & Pennsylvania, which rises and crosses the WM twice as it reaches Frostburg.