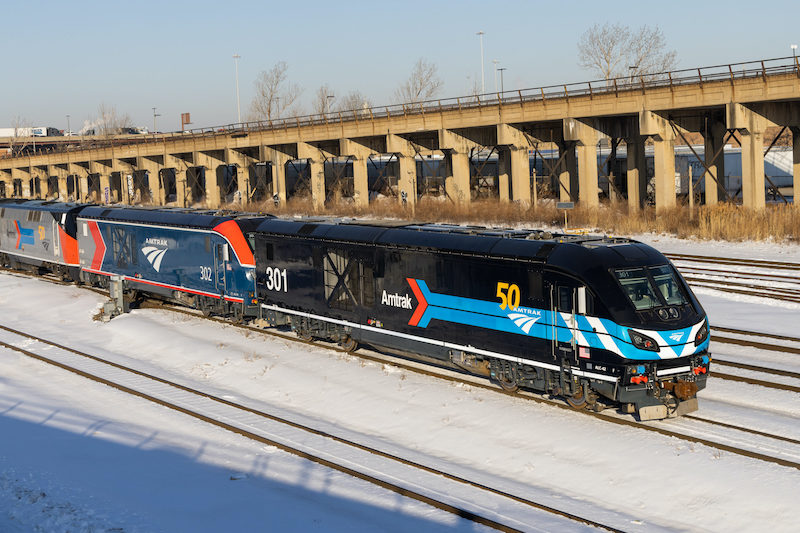 Amtrak ALC-42 locomotives 301 and 302 and P42 161 are seen in Chicago on Tuesday before being put on the westbound Empire Builder. An issue with the lead unit’s Positive Train Control system required Amtrak to add another P42 on the point. Amtrak Photos by Marc Glucksman/River Rail Photo

CHICAGO — The “new face” of America’s Railroad made its debut on Tuesday in Chicago — albeit behind a 25-year-old General Electric P42, the same type of locomotive the new ones are supposed to replace.

Amtrak’s Empire Builder was expected to be led Tuesday afternoon by two brand new Siemens Mobility ALC-42 locomotives, 301 and 302, along with a P42 trailing. However, shortly after a brief ceremony at Chicago Union Station — during which Amtrak officials announced they would be purchasing 50 more ALC-42 locomotives — a GE P42 was added to the front of the consist. Amtrak spokesperson Marc Magliari said the lead unit, 301, was having issues with its Positive Train Control system and so instead of delaying the train they opted to put the older P42 on the point. 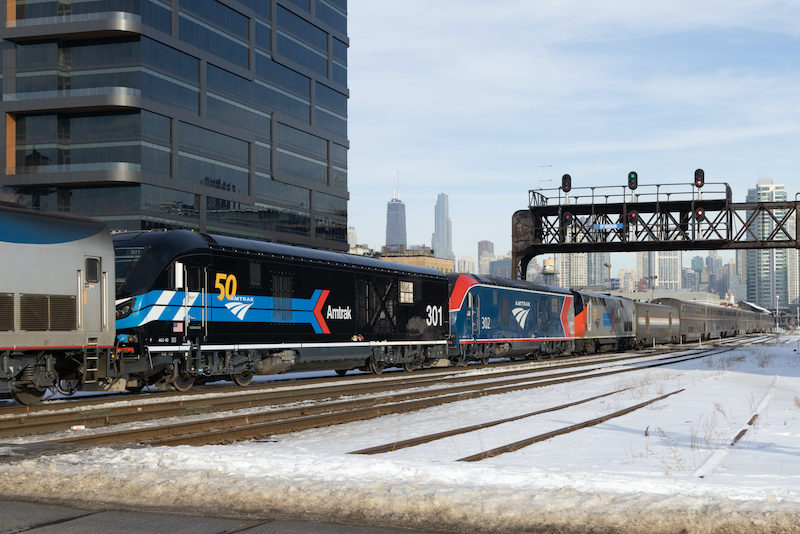 An Amtrak P42 locomotive leads two ALC-42s and a P42 out of Chicago on Tuesday. Amtrak Photos by Marc Glucksman/River Rail Photo.

The train departed Chicago late and by the time it departed its first station stop in Glenview, Ill., it was one hour and six minutes behind schedule due to another mechanical issue with the train.

Despite the less-than-perfect debut, Amtrak officials said they are all in on the Siemens Charger and would be purchasing 50 additional locomotives on top of the 75 they already have on order. The ALC-42 locomotives are based on Siemens’ Charger series of locomotives but have larger fuel tanks, 4,200 horsepower and a new front-end that makes it easier to repair out in the field. 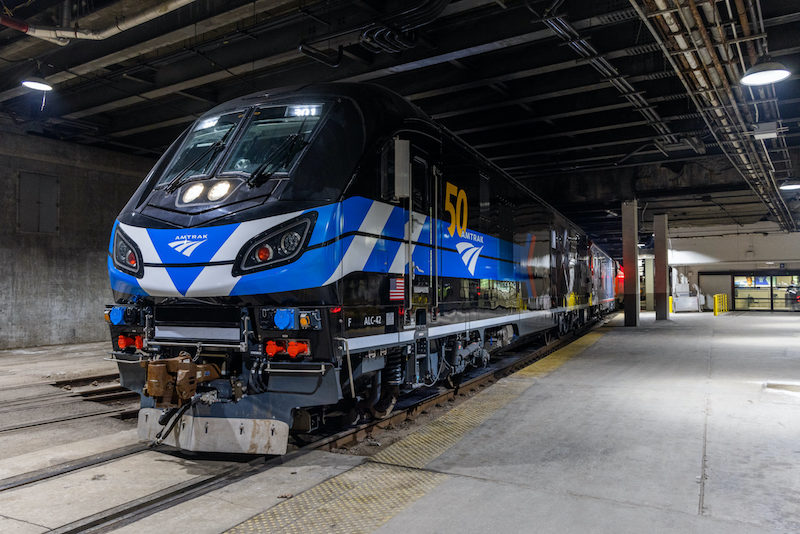 Amtrak 301 on the point of the Empire Builder, shortly before a technical issue forced Amtrak to put a P42 on the point. Amtrak Photos by Marc Glucksman/River Rail Photo.

“While railroading is a small portion of the emissions picture nationally, we want to take these steps to be the cleanest passenger railroad operating diesel trains in North America, commuter or interstate,” Hull said. “We’re dedicated to continuously seeking new and innovative technologies that provide solutions to meet transportation needs while reducing health and climate impacts.“

Siemens officials were also on hand for the debut and said that they were proud to have become Amtrak’s primary motive power producer.

“From the first ACS-64 in 2014 to the latest Charger Locomotive, Amtrak is a leader in sustainable travel for Americans. And Siemens Mobility is a proud partner in its efforts. We are looking forward to seeing these Chargers safely transport millions of Americans across the nation, whether it be seeking new adventures or connecting to economic opportunity,” said Michael Cahill, President of Rolling Stock, Siemens Mobility North America.