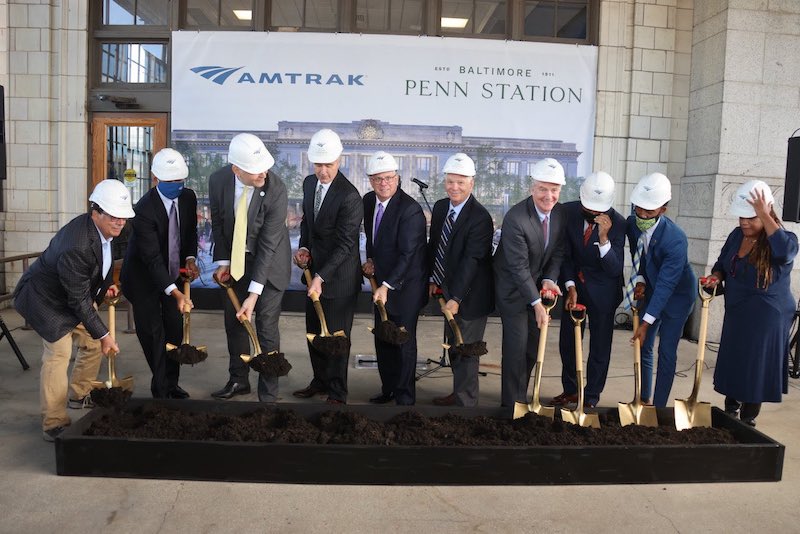 Officials gathered for a ceremony to mark the beginning of the first major renovation at Baltimore’s Penn Station in a generation. Photo Courtesy of Gov. Larry Hogan’s Office.

The station was built in 1911 and was last renovated in 1984. Penn Station serves as the primary transportation hub in Baltimore, and prior to the pandemic, more than three million Amtrak and MARC passengers moved through the facility each year. The Baltimore Penn Station redevelopment project will expand and modernize the historic landmark to better accommodate passenger growth, significantly improve the customer experience and create a revitalized civic space.

“Today we begin a new chapter for Baltimore Penn Station. In partnership with Penn Station Partners, we are set to transform Penn Station into a premier regional transportation hub,” Flynn said. “This construction will serve as the catalyst to transform surrounding vacant land already owned by Amtrak into a mixed-use, transit-oriented development with up to one million square feet of new office, retail and residential space.”

Planning for the renovations began back in 2018 and is being developed by Beatty Development Group and Cross Street Partners, which together are Penn Street Partners.

In addition to station improvements, Amtrak is also breaking ground on platform improvements to better accommodate its new Acela trains that are set to launch next year. To allow for greater operability of train service, Amtrak is rebuilding a low-level platform into an ADA compliant high-level platform and constructing a new platform. This work, along with a renewed overhead electrical system and an upgraded 30-mile stretch of track between Baltimore and Washington Union Station, will enable operation at higher speeds on the Corridor. Once fully completed, these upgrades will improve on-time performance for high-speed train operations by providing route flexibility and allowing unimpeded travel.

Work on the building facade will begin in the coming weeks and the entire project is expected to be completed in the next few years.