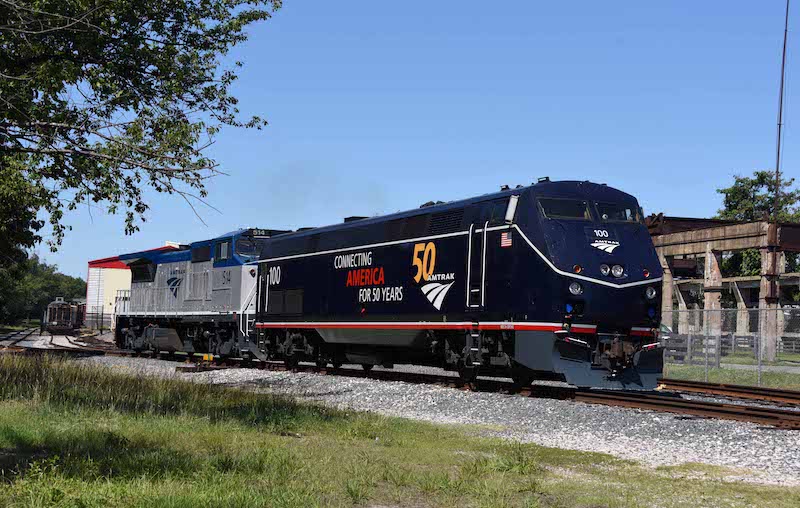 Amtrak P42 100, painted in a 50th-anniversary scheme, moves into the B&O Railroad Museum on Thursday morning where it will be on display for the weekend. Photo by M.T.Burkhart.

BALTIMORE – One of Amtrak’s locomotives recently painted for the passenger carrier’s 50th anniversary will be on display over the weekend at the B&O Railroad Museum.

Amtrak P42 100 in the “Midnight Blue” scheme, moved from Ivy City in Washington, D.C. to Baltimore in a special move over CSX tracks on Thursday morning, arriving with Amtrak P32BWH 514.

The locomotive was in town for an anniversary event on Thursday evening where Maryland Gov. Larry Hogan announced the state’s commitment to working with Amtrak and the federal government to replace the aging B&P Tunnel in Baltimore City. The 147-year-old tunnel is a critical part of the state’s infrastructure, serving over 9 million customers annually on Amtrak and MARC service, according to the Governor’s office. Locomotive 100 was posed with cosmetically restored Baltimore & Ohio EA number 51 for the event.

“This is a critical project for Baltimore, for the State of Maryland, and for the entire Northeast Corridor of the United States, and we plan to work with Amtrak and the federal government to move it forward as expeditiously as possible,” he said.

Amtrak 100 is one of six commemorative paint schemes that will adorn five P42s and one new ALC–42 locomotive. It will be on display at the museum through the weekend. Hours are Saturday 10 a.m. to 4 p.m. and Sunday from 11 a.m. to 4 p.m.