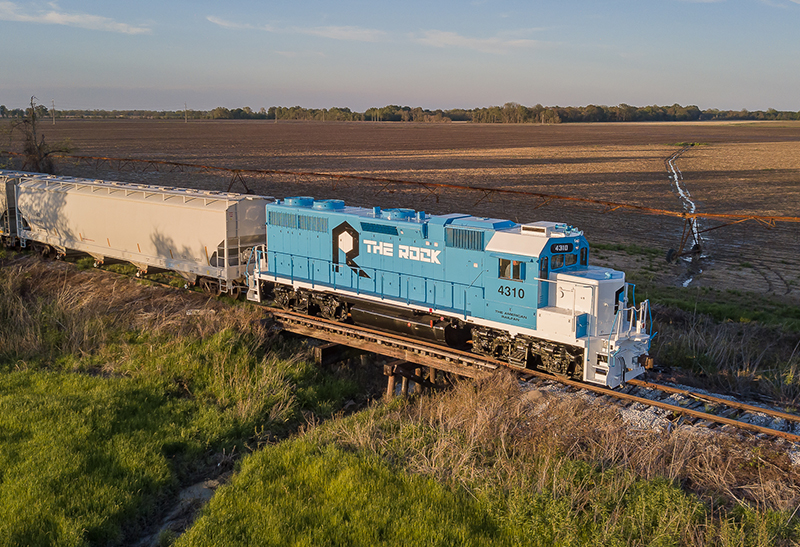 A freshly-painted GP38 on a new short line is turning heads in Mississippi. In mid-April, photos of Rock Island GP38 4310, dubbed “The America Railfan,” began to emerge on the internet. But perhaps more amazing than the appearance of a Rock Island locomotive in 2020, is the name of the railroad it works for: the Chicago, Rock Island & Pacific.

After a career with Union Pacific and Canadian National, Robert J. Riley dreamed of owning a railroad of his own and began with a series of contract switching operations.  While researching historic railroad names, he found that when the original CRI&P, also known as ‘The Rock,’ was liquidated no one bought the name, which had become synonymous with failure when it shut down in 1980. With the approval of incorporation papers filed in 2017, Riley became the owner and president of the revived Chicago, Rock Island & Pacific Railroad.

With the support of his wife, Gwen, Riley aimed higher and began submitting bids on longer lines, quickly earning serious consideration based on high ratings from previous customers.

In early 2019, Riley was awarded the contract to operate the Coahoma County-owned Mississippi Delta Railroad between Jonestown and a connection with CN at Swan Lake, a 60-mile former Illinois Central line that was spun off in 1985. The first revenue run came on April 28, 2019.

Riley was unable to acquire the original RI 4310 (now GMTX 2120), which wore a dedication to railroad enthusiasts in the late 1970s, so he purchased a former Southern GP38 to fill the role. Prior to coming to Mississippi, the locomotive worked for the Iowa Interstate and GATX. Riley even equipped the freshly painted locomotive with a Nathan airhorn from an original Rock Island unit. The RILX reporting marks belong to subsidiary Rock Island Leasing. The railroad’s marks are RI. Southern Pride Equipment Painting finished the paint on 4310 on April 18 and quickly got to work on another GP38, RI 4373, that will also appear in blue and white. The railroad is also leasing a former Cimarron Valley GP30.

Riley has even bigger plans for the reborn Rock Island for the future, including passenger excursions. While Mississippi may seem like an odd place for the return of The Rock, Riley hopes the railroad will expand beyond those borders and, based on his track record so far, it shouldn’t surprise anyone if it happens.