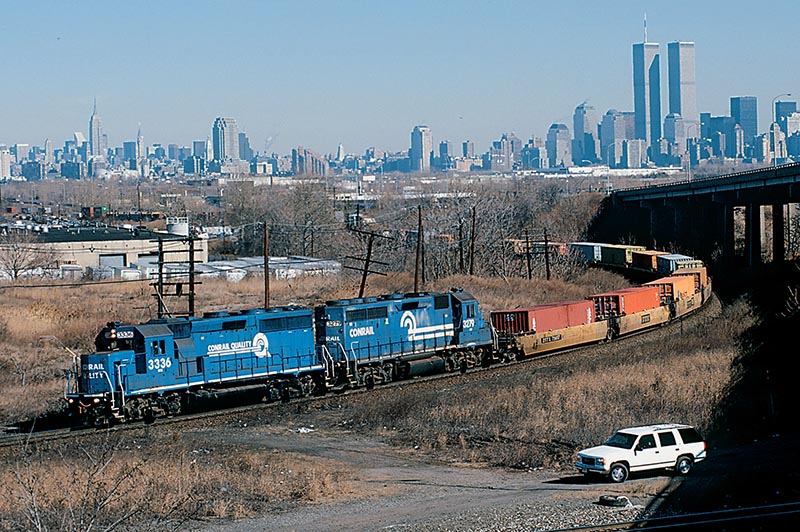 Port Newark-bound intermodal Train TV24P makes the swing towards the Upper Bay Bridge near the end of the National Docks Branch in Jersey City under the watchful eye of a Conrail police patrol on February 15, 1998. 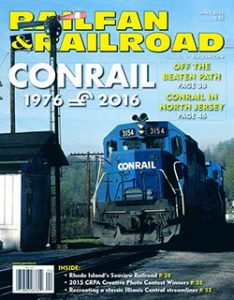 By Tim Doherty/photos by the author

Passing the same North Jersey landmarks that the fictional Tony Soprano made famous in the opening credits of the cable series “The Sopranos,” Conrail’s never-ending procession of trains would work their way through the crown jewel of their near-monopoly of rail service in the New York metropolitan region. Among all the bagel shops, White Castles, and auto repair shops in North Bergen, Jersey City, Kearny, Elizabeth, and Newark, were Conrail’s freight yards, intermodal terminals, and auto facilities. All these facilities, as well as the lines that fed them from every point of the compass, were woven from the threads of fallen flags such as Lehigh Valley, Pennsylvania, Jersey Central, Reading, and New York Central. Changes to Conrail’s footprint in North Jersey mirrored the region’s disruptive economic transformation from manufacturing to consumption as New York and New Jersey evolved from making things to simply importing them.

Conrail tightened its hold on lucrative freight traffic through the government-directed takeover of the six bankrupt railroads (Penn Central, Lehigh Valley, Erie Lackawanna, Lehigh & Hudson River, Reading, and Jersey Central) and that consolidated nearly all of the major eastern carriers into one company on April 1, 1976. Structural reforms to the railroad industry, government-funded investment, and massive reductions in both physical plant and people by the early 1980s allowed Conrail to turn what was a drain on its predecessors into its most valuable franchise. By the mid- 1990s, as part of a nationwide railroad merger mania, Conrail’s two eastern counterparts — Norfolk Southern and CSX Transportation — would fight all the way to the bank to pay $10.2 billion to split this monopoly between them.

All Roads Lead to New Jersey

Shorn of the commuter train burden by an act of Congress in 1981, Conrail transferred the related facilities and large numbers of employees to New Jersey Transit in 1983. By the 1990s, Conrail’s freight operations in North Jersey were nearly segregated from the equally large passenger operations of Amtrak and NJT, with the exception of a small portion of the Lehigh Line shared with commuter trains. Because Conrail largely avoided the busy corridors, many of its freight trains snuck through the country’s most populous areas unnoticed. 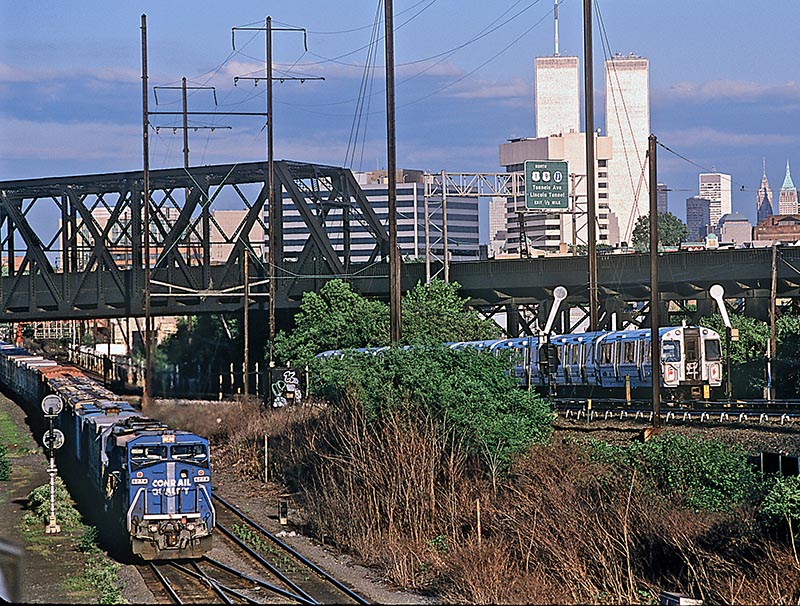 An inbound PATH rapid transit train passes westbound Selkirk to Hagerstown train SENS on the P&H Line in Jersey City, N.J., where the two lines once controlled by the Pennsylvania Railroad run parallel near the Hackensack River.

Conrail trains arrived in North Jersey from the north down the former New York Central River Line (now CSX), which connected with the Chicago and Boston Lines at Selkirk, N.Y. The former NYC route following the west shore of the Hudson River provided the key intermodal route between the western gateways and New York City. The southern end of the River Line parallels the Palisades, 200-million-year-old basalt cliffs extending 20 miles from Jersey City to Nyack, N.Y., which limit the routes trains can take because of tunnel clearances through ancient rock.

To the west, the former Lehigh Valley (now NS) mainline route to Bethlehem, Pa., provided a connection west into Pennsylvania and south towards Philadelphia via the Trenton Line (now CSX) at Bound Brook, N.J. The northern end of the Lehigh Line was protected by NK Tower in Newark, making it Conrail’s last non-drawbridge interlocking tower in north Jersey. Between the River Line to the north and Lehigh Line to the south, the yards and terminals in North Jersey would send out and receive a fleet of high-priority intermodal trains and doublestack container trains with boxes off ships at Port Newark. Long snake-like autorack trains would feed the different auto terminals and the string of assembly plants along the Northeast Corridor. A mix of through and terminating carload manifest trains supplied the different carload yards, locals, and customers.

Which Way Did He Go?

Clearance restrictions and yard locations determined which of the often multiple routes each train would take through North Jersey. At first, understanding what was moving where and why was a game of code breaking, as shorthand phrases such as “Light engines to 91 Bay,” had to be solved by noticing that it was as simple as the street address for the engine house at the massive Oak Island, N.J., yard. The often staggering highway congestion that is common to the area could add its own challenges. The endless repetition of traffic reports from the AM news stations would helpfully and permanently be burned into the brain. If only the chopper pilot could relay train locations in this era before mobile internet, GPS maps, and social networking.

Near the southern end of the River Line, North Bergen yard (now CSX) served a mix of carload traffic as well as the intermodal terminal located near a UPS facility. Heading south, trains would either continue down the “Northern,” a straight but low-speed line towards Croxton paralleled by U.S. Routes 1 and 9, or continue on the River Line east through the Palisades in the tunnel to Weehawken, Hoboken, and Jersey City. This route, which would later be sold to become part of NJT’s Hudson-Bergen Light Rail system, presented both scenic views of the New York skyline just across the Hudson and a unique challenge. With the high-value cargo traveling through North Jersey, a gang called the “Conrail Boyz,” whose sophisticated understanding of railroad operations would put railfans to shame, would pull the pins on passing trains to help themselves to the cargo. It got so bad that Conrail Police cruisers would pace every train through Hoboken, since the gangs were known to stop empty table trains just for the practice. 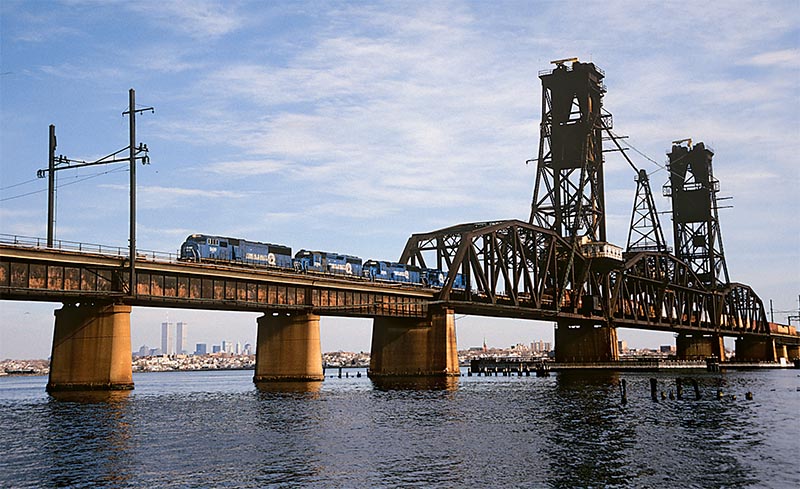 On the shore of Newark Bay next to Oak Island Yard, the oddly named and decrepit Roanoke Yacht Club provided an impressive view of the Upper Bay Bridge and Conrail’s Selkirk to South Amboy Train SESA.

The Southern Tier Line, once the former Erie Railroad mainline, linked Buffalo with Jersey City and fed into the west end of Croxton Intermodal terminal. Benefiting from the generous clearances of the Erie, the Southern Tier provided the initial route for doublestack trains into the New York area. As other routes serving New Jersey were cleared, Conrail would have an on-again, off-again relationship with the Southern Tier, routing trains that way when traffic levels required a relief valve.

At the east end of Croxton, the Northern splits with the National Docks at “KW” before heading south and then west at CP Marion on the former Pennsylvania Railroad Passaic & Harsimus (P&H) Line before crossing the Hackensack River on the movable bridge “Hack.” Just west of the bridge was Conrail’s Kearny yard (now CSX) and the APL Intermodal Terminal. Heading further west from Kearny, the P&H line runs to Newark, Oak Island Yard, and connections west.

Originally built to connect the PRR to a Standard Oil facility in Jersey City, the National Docks branch served a terminal line connecting the many different railroads that lined the New Jersey banks of the Hudson River. Heading east from CP Croxton, the National Docks passes through the Palisades in a tunnel. In a spaghetti-like junction at CP Nave, the National Docks both crosses over the River Line and connects with it before heading south through Jersey City on a series of trestles. At this point, trains on the National Docks have skyline backdrops of Jersey City and Manhattan. Back at CP Nave, the River Line made a turn west on a different set of trestles at CP Waldo and paralleled the PATH rapid transit tracks through Journal Square before connecting with the P&H Line; the right-of-way is still present, but the connection has been removed.

The National Docks branch takes a sharp turn west before crossing Newark Bay on the Upper Bay Bridge and entering Oak Island Yard. The Jersey City Extension of the New Jersey Turnpike and its breakdown lanes provided many opportunities to view trains on the National Docks. 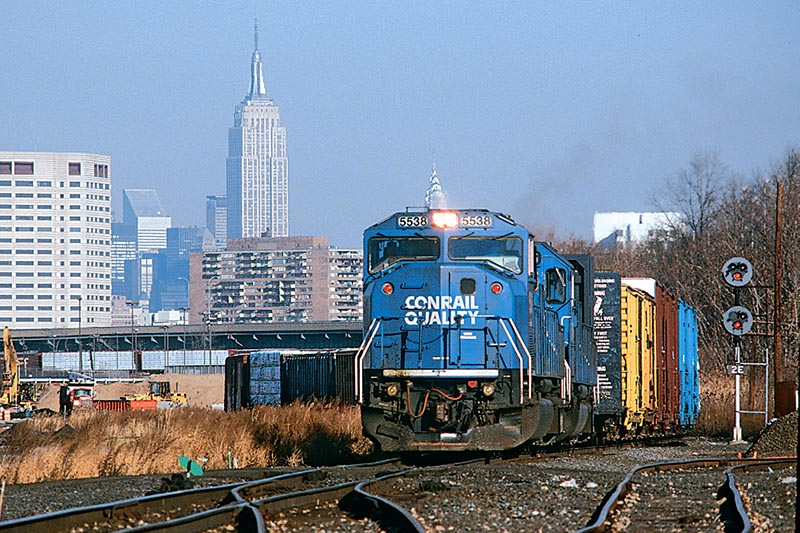 Selkirk to Jacksonville Train SECS heads south on the National Docks Branch with the Empire State Building standing guard across the Hudson River on December 17, 1997.

The Mystery of Oak Island

Located in a bleak industrial section of Newark, Oak Island Yard was first constructed by the Lehigh Valley in the 1890s and rebuilt by Conrail in 1977-79, when it became one of the key classification yards in the system. Oak Island Yard is crossed by the New Jersey Turnpike, Routes 1 and 9, and at the east end of Doremus Avenue. It hosts scrap yards, oil terminals, and an auto terminal served by Conrail next to the Port Newark complex. A trash-strewn Doremus Avenue was the subject of a 1964 photograph by David Plowden, who was standing on the bridge over Oak Island Yard. Later asked if he had been there to photograph trains, Plowden replied no, he wasn’t, but instead he was capturing the trash and decay.

Following the New Jersey Turnpike due south from Oak Island, the Chemical Coast Line serves the oil refineries that populate Bruce Springsteen’s song “State Trooper” all the way to Brown’s Yard in South Amboy. Off the Chemical Coast line and split between Newark and Elizabeth, the Port Authority’s massive Port Newark complex generates an array of traffic. The large deep-water port allows for unloading an endless sea of containers, which by 1991 were loaded dockside onto trains as well as at other nearby terminals. Port Newark also retained a carload business with locals switching boxcars between warehouses deep in the port complex, where the air would oddly smell of spices from an importer.

Breaking Up is Hard to Do

Once CSX and Norfolk Southern finally caught what they wanted in Conrail in North Jersey in 1999, they then had to figure out how to split it up. The rationalization of the past 25 years had created a very efficient operation while limiting redundant routes and track.

Their answer was a surprise: retaining Conrail as a shared assets terminal operator that served the two owners. Probably as much of a surprise is not only how well it has worked, but also that Conrail’s shared assets still remain. A final surprise is that one of Conrail’s owners restored one of the shared assets assigned SD45-2s into its original Erie Lackawanna paint, and it now roams North Jersey on Conrail tracks.

Conrail’s presence in North Jersey constantly evolved since the first splash of blue paint in 1976 through the last days of independence at the turn of the century. Since then, changes continue to unfold in the vast urban region that Conrail served and the infrastructure around it. New roadways built to tame growing congestion have removed all the grade crossings on the Northern and created a new spaghetti bowl of pavement at the junction of Routes 1 and 9, the Pulaski Skyway, and the entrance to the Holland Tunnel. Similarly, the southern end of the River Line is now part of the Hudson-Bergen Light Rail system and freight trains no longer have to be paced by railroad police in Hoboken.

Tim Doherty spent three years in New Jersey in the 1990s, where he received a Masters in City & Regional Planning from Rutgers. He has lived in Massachusetts for the past 18 years and works in the public sector on transportation.

This article appeared in the April 2016 issue of Railfan & Railroad.