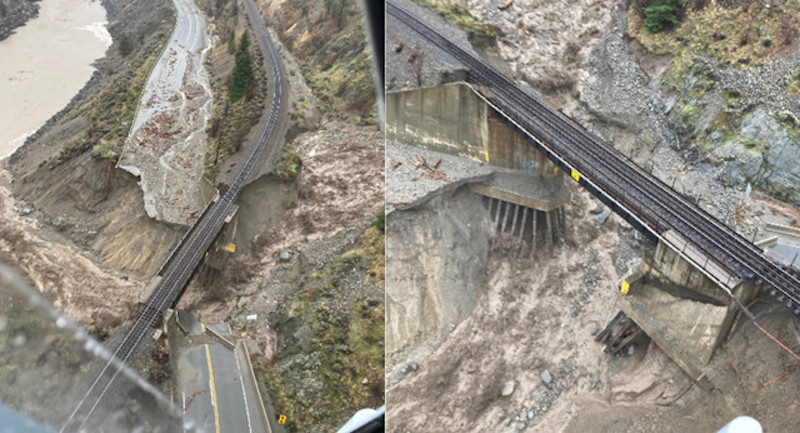 Washouts in the Fraser River Canyon impacted both highways and railroads this week. Photo Courtesy of B.C. Ministry of Transportation.

LYTTON, B.C. — Rail service in British Columbia’s Fraser and Thompson River Canyons is at a standstill after heavy rain pummeled the region, resulting in washouts on Canadian National and Canadian Pacific’s routes through the area.

The rain started on Sunday and continued through Monday. While flooding and washouts were being reported across the southern part of British Columbia, some of the worst damage appeared to be in the Fraser and Thompson River Canyons, where CP and CN have a joint operating agreement. According to CTV News, a CN train derailed on CP tracks near Yale on Sunday afternoon. Then on Monday, about an hour north at Lytton, a washout had taken out Highway 1 underneath the railroad at a spot called Tank Hill, apparently destabilizing a railroad bridge. Lytton was the site of a devastating fire that leveled much of the village earlier this year.

The full extent of the damage from the storm was unclear on Tuesday morning.

Rain and wind were hitting other parts of the Pacific Northwest as well, from Seattle to Montana, where gusts in excess of 100 miles per hour were forecast. On the west coast, Sound Transit had preemptively suspended commuter rail service between Seattle and Everett over concerns about landslides on BNSF Railway’s main line.