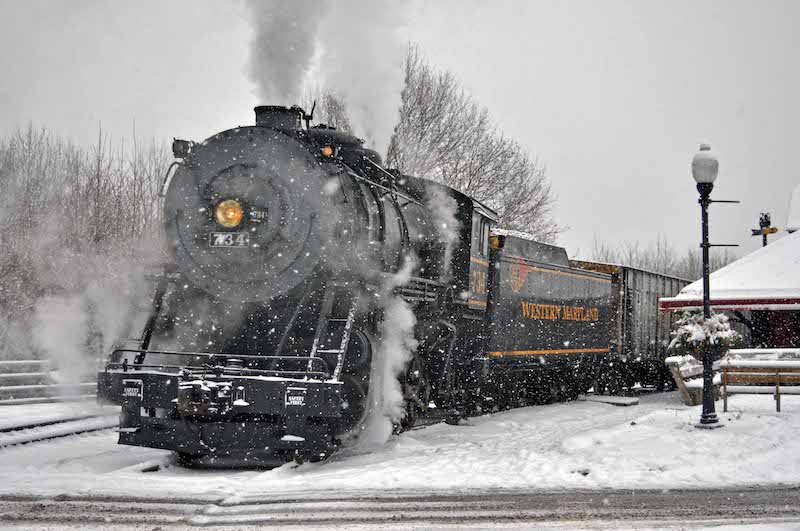 Western Maryland Scenic’s Baldwin 2-8-0 734 was at Frostburg, Md., in January 2010, for a photo charter. The railroad has begun collecting donations for an evaluation for its return to service. Photo by M.T.Burkhart.

CUMBERLAND, Md. – Western Maryland Scenic Railroad has started collecting donations for the evaluation of 2-8-0 734 for a possible return to service, the railroad announced over the weekend.

One of the East Coast’s favorite photo charter locomotives, the “Consolidation” type was built by Baldwin in 1916 for the Lake Superior & Ishpeming. Originally numbered 18 (and later 34) it served the LS&I until retirement in the early 1960s. After that, it went to a tourist railroad and was later displayed at the Illinois Railway Museum before coming to Western Maryland Scenic and restored to service in the early 1990s.

“The Western Maryland Scenic Railroad was reliant on 734 for over two decades,” the railroad said. “Within the 23 years of service, the engine has built up a reputation of cultural significance in our community.”

The evaluation will start this spring, said Wesley Heinz, the railroad’s executive director. He made the announcement on Saturday afternoon at Helmstetter’s Curve during a charter hosted by J.C. and Ann McHugh, of McHugh Locomotive & Equipment, who have supported the non-profit railroad with donations of time, materials, and labor.

The 734 needs an FRA-1472 overhaul from “the railhead to the stack,” the railroad said, adding that the restoration would move ahead as funds allow. The railroad has set up a page for donations.

Also over the weekend, the railroad unveiled a vintage tank car that will serve as water storage for recently restored 2-6-6-2 1309. Constructed in 1956, the car, former DuPont 8959, holds about 7,800 gallons and was donated by the McHughs.

Chesapeake & Ohio 1309, built by Baldwin in 1949, was pulled from display at the B&O Railroad Museum in Baltimore in 2014 and shipped to the railroad’s Ridgeley, W.Va. shops. The years-long restoration wrapped up in late 2021.

Locomotive 1309 has an aggressive schedule later this year. It will power Friday, Saturday and Sunday trips between Cumberland and Frostburg from May through October, as well as numerous holiday trips in November and December. Several photo freight charters are also planned for later this year and early 2023. For more in its schedule check out https://wmsr.com/.