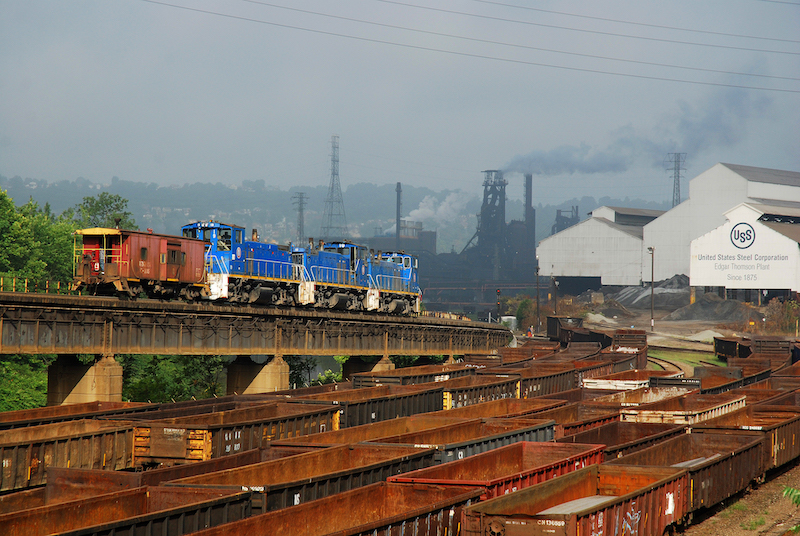 The sale includes six different railroads across the country, including the Union Railroad (seen above), that serve U.S. Steel mills. Photo by Scooter Hovanec.

PITTSBURGH — The United States Steel Corporation is getting out of the railroad business.

On Wednesday, U.S. Steel announced it was selling its railroad subsidiary, Transtar, LLC, to an affiliate of Fortress Transportation and Infrastructure Investors for $640 million.

The sale includes the Union Railroad in Pennsylvania; the Gary Railway Company in Indiana; Lake Terminal Railroad in Ohio; Fairfield Southern in Alabama; Delray Connecting Railroad in Michigan; and the Texas & Northern Railroad in Texas. U.S. Steel officials said the deal will still need to be approved by regulators but that they were confident the transaction would happen and they have already signed a 15-year contract to maintain the existing operations that serve its mills.

“By selling Transtar to an experienced railroad operator, U. S. Steel can better focus on our broader Best for All strategy,” said U. S. Steel President and Chief Executive Officer David B. Burritt. “By monetizing our railroad assets at an implied multiple well above our existing valuation, we create immediate value for our stockholders. In addition, the strong partnership we have created with FTAI will ensure continued support of our steelmaking facilities with predictable and cost-effective railroad operations.”

Fortress is no stranger to railroading and in the past owned Florida East Coast and Central Maine & Quebec. It also owns Brightline, Florida’s privately-run passenger railroad.

The transaction is expected to close sometime during the third quarter of 2021.