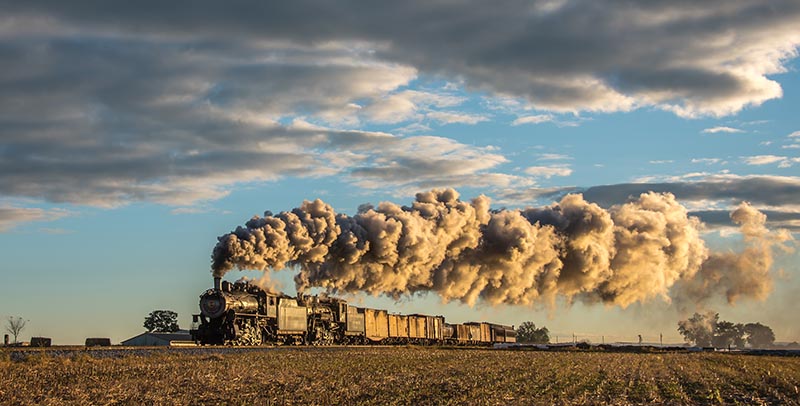 “Double-header” was a railroad term before it became part of baseball’s lexicon. A double-header greets the sunrise on Strasburg Rail Road on October 24, 2018. Photo by Steve Barry

Railroads have been a part of the landscape for nearly 200 years. In that time, they have helped shape that landscape in many ways. From where and how towns grew to what food showed up on the average dinner plate, the technology and industry of railroading echo throughout our lives.

One area that I find particularly interesting is speech and language. Several phrases and idioms that we use routinely originate from the world of railways. The baseball term “double-header,” meaning two games played sequentially, originally described operating two steam locomotives at the head of a train. The political term “third rail” is a reference to the additional outside rail used by many urban railways to power electric locomotives. To touch a political “third rail” is to wade into a contentious issue, the result of which might end a career as surely as touching a subway’s third rail would end a life.

Many have studied railway language, not the least of whom was Freeman Hubbard, who served as editor of Railroad Magazine — one of Railfan & Railroad’s ancestors — for 42 years. In 1940, Hubbard penned an article titled “Lingo of the Rails,” collecting about 400 different terms from the railway industry. The list was so good that, three years later, it was republished in the prestigious academic journal American Speech.

Hubbard’s collection is now 80 years old and many of his terms seem to have lost currency. Hubbard records the phrase “walk the dog” as meaning “to [run] a freight so fast as to cause the cars to sway from side to side.” Certainly I’ve seen the effect, but I’ve never heard it called such. “Kitchen,” meanwhile, used to mean the cab of an engine, no doubt a nickname that died off with the end of steam locomotive use. A similar story is probably true of “ballast scorcher,” meaning a “speedy engineer.”

The fragments of language that Hubbard collected are a reminder that railroading once employed enough people to constitute its own subculture. And while there are now far fewer railway employees than there were in the 1940s, some of that culture has survived. Many terms on that 1940 list remain in use by North American railroad employees today. For example, a temporary track built around a washout, work area, or other obstruction is still known as a “shoo-fly.” Similarly, an employee who moves around from place to place on a railway system is still known as a “boomer.” An off-duty engineer or conductor riding a train back toward their main base of work is still said to be “deadheading.”

More than this, the last 80 years of technological and operational changes have added to the list as much as they have taken away from it. In Hubbard’s time, there were not yet “FREDs” (meaning flashing rear-end devices). If the term “pig train” existed in 1940, it escaped Hubbard’s notice, and even if it had, it probably wouldn’t have meant a train of truck trailers on flatcars, as it does now. A favorite term is “dupe,” a sounding-out of “DPU,” the acronym for “distributed power unit.” Some railroaders describe adding DPU-equipped locomotives to a train as “duping it up.” Those units, controlled from the lead, are in a sense brainless, so “duping” seems not just slang, but poetry.

Do you have a favorite bit of railroad lingo? Whether you work in the railroad industry or are an enthusiast, drop me a line with your favorite words or phrases. After all, it’s been 80 years, and Hubbard’s list is long overdue for a refresh.