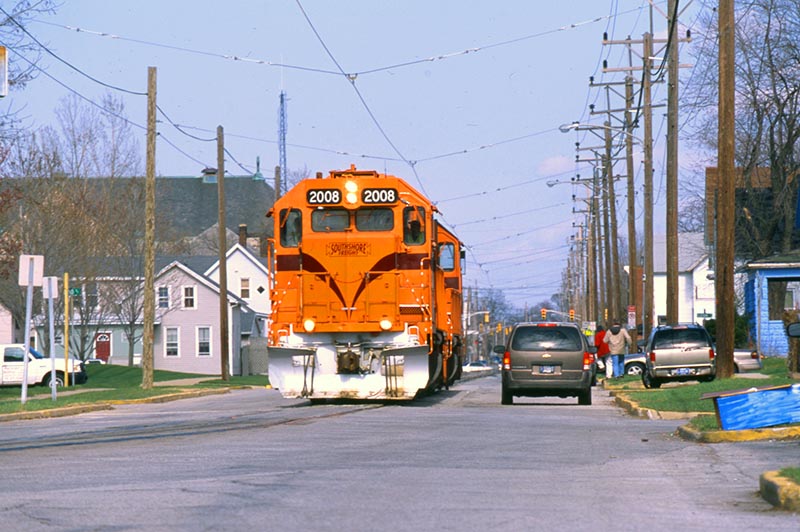 The 11th Street corridor is also shared by freight trains operated by the Chicago South Shore & South Bend, a subsidiary of Anacostia Pacific. A pair of GP38s make their way down 11th Street on April 17, 2011. Photo by Otto M. Vondrak.

MICHIGAN CITY — South Shore Freight has been running occasional daytime detour trains to get around Michigan City, Ind., while its former street trackage is being grade-separated and double-tracked.

On Monday, February 28, bus service substituted for passenger train service between the Carroll Avenue and Dune Park stations through at least fall 2022. Passengers going between Chicago and South Bend, Ind., must transfer from a train to a bus and back to a train to complete their journey.

The stretch of street running through Michigan City has long been one of the most iconic spots on the South Shore Line for photography. For years, passengers were able to board and detrain right in the middle of the street, a throwback to the South Shore’s interurban roots. The alignment down 11th Street dates back to 1908, with the iconic 11th Street Station opening in 1927. The 11th Street station was closed on April 30, 2021, so that preliminary work could begin on the realignment project. The station building itself was closed in 1987, and was torn down on January 31. The terra cotta facade was saved, and will be reinstalled as part of the new station complex that will be constructed with high-level platforms and additional parking.

Freight (and commuter shop moves) can happen at night and weekends when construction is halted, but South Shore Freight has been running some daylight detours using Canadian National trackage from Chicago to Stilwell, Ind. to serve its trackage east of Michigan City, Ind. Power has been South Shore’s own locomotives.

The double-track project in Michigan City is part of a multi-million-dollar effort to improve service. As far back as 2009, Northern Indiana Commuter Transportation District — operators of the South Shore Line — explored options to relocate or rebuild the main line through Michigan City to relieve congestion and increase service. Once it is complete, the railroad will be able to run additional trains during rush hour and a trip between Michigan City and Chicago will take 67 minutes as opposed to the current 1 hour and 40 minutes.