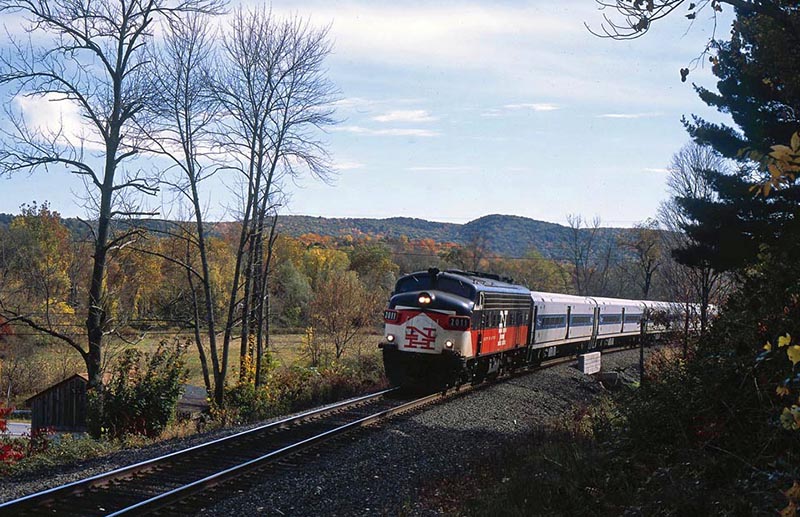 Metro-North train 9927 heads north near Amenia, New York on a crisp October afternoon in 2008. As commuters settle farther and farther away from New York City, this rural single-track has seen an explosion in ridership over the last 20 years.

On a cool, crisp October morning in 2008, I was up with the sun and hiking deep into the woods along one of the oldest commuter routes in the country. A flock of geese makes their way south, and the hustle and bustle of New York City seems a thousand miles away from here. This morning, I was in search of a little tranquility.

Metro-North’s Harlem Line is a railroad with many faces. Making its way through Manhattan and the Bronx and into tony Westchester County, the railroad is a multi-track, heavy-duty, urban commuter hauler. Above White Plains we’re down to two tracks, but third rail extended in the 1980s propels swift electric trains through the northern suburbs. Just north of Brewster in Putnam County the third rail ends and we’re down to a single track. Years ago, the line was a through route for trains connecting with the Boston & Albany at Chatham.

Standing along a lonely streak of rust fifty miles from New York City, I drank in the tranquil scene at Ice Pond. Long ago used by locals to harvest ice for refrigeration, the body of water is girded by rails on both shores. The foliage was at peak, and the hillside was ablaze in vibrant oranges and reds. A slight breeze kicked up the water, and a few birds flew by. A horn sounded from the north, signaling that our train was racing through the crossing at Towners. In a few moments the three-car train came into view, being pushed by a 1960 graduate of LaGrange. The only thing in a hurry in this scene is the train.

Today the end of the line is a former farmer’s field 82 miles from the bumping block at Grand Central. Even though the trains now run on welded rail and call at fancy new high-level platforms, the single track snaking through the Harlem Valley retains much of its country charm. Horse farms and dairy barns are still prominent landmarks opposite the new developments and sprawling shopping centers. The afternoon hours found me climbing the hillsides near Amenia, New York. From my perch, I could easily see the Taconic foothills surrounding a nearby farm.

I thought about photos I had seen from the Penn Central era where ragged FL9’s hauling twelve coaches bounced and banged their way to Chatham. This service ended in 1972, and the tracks were later removed by Conrail. Metro-North replaced the tracks through Amenia in 2000, making this scene possible once again. A distant horn at Ten Mile River suggested I get ready. The train screamed into view and I fired the shutter. After the train passed, some birds began to call to one another.

In a little more than two hours, a train can whisk you from the rolling pastures of Dutchess County to the concrete canyons of New York. I can go to New York anytime. For now, I’ll enjoy the solitude.