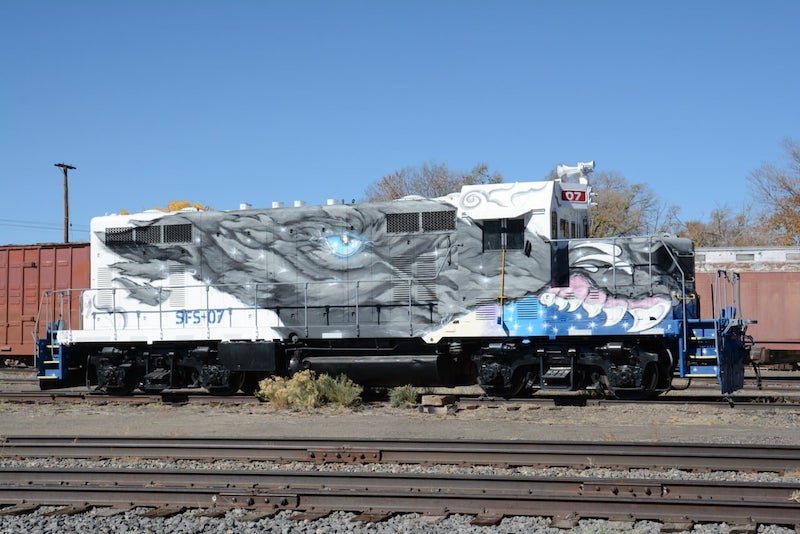 The railroad will resume operations starting next month after being purchased by a group of investors led by “Game of Thrones” creator George R.R. Martin. Photo by Joel Wendt.

LAMY, N.M. — The former Santa Fe Southern Railway is reopened under a new name, Sky Railway, and will begin running excursions next month.

The railroad is owned by a group of investors led by “Game of Thrones” creator George R.R. Martin, who is playing a major role in the line’s revival. The noted fantasy novel author’s influence can already be seen on the equipment, which includes GP7s with wolves and dragons painted on the side.

“We need to be bold, wild, and exciting, with something different up our sleeve,” Martin said. “In the long run, we need to try things that other railroads would never dare attempt. No one else has a wolf or dragon. We do. I hope we come up with a howl and a roar worthy of them.”

The Santa Fe Southern was created in the 1990s after Santa Fe sold the under-performing branch line between Santa Fe and Lamy. The SFSR operated freight and passenger service on the 18-mile line until 2010 when freight traffic dried up. It continued to operate regular excursions until 2012. Since then, the railroad has operated sporadically, hosting occasional charter trips, weddings and video productions, including an episode of “Breaking Bad.” In 2020, Martin along with Bill Banowsky, Douglas Preston and Gary Oakley, purchased the railroad with the idea of resuming excursion service.
According to the railroad’s website, Sky Railway excursions will begin on December 3. Visit the railroad’s website for more information.