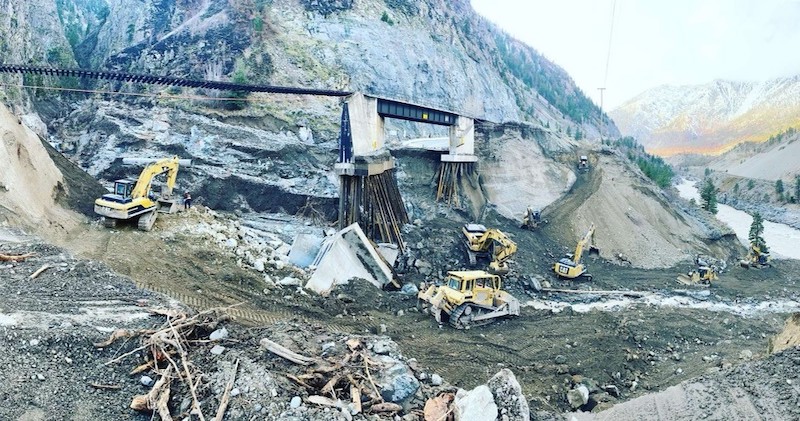 KAMLOOPS, B.C. — Canadian Pacific Railway expects to reopen its main line through the Fraser and Thompson River Canyons by Tuesday, the railroad announced today. The news comes more than a week after an atmospheric river rain storm pummelled British Columbia, resulting in floods and washouts across the region.

Canadian National, which also has a main line through the area, told customers today that they expected to reopen their tracks by Wednesday. CP and CN have a joint operating agreement through the area.

However, railroad officials were warning customers that it could be days or weeks before service gets back to normal.

“I am extremely proud of the CP team. Their extraordinary dedication, grit and perseverance in the face of extremely challenging conditions are the reasons we are able to restore our vital rail network in only eight days,” said Keith Creel, CP President and CEO. “The following 10 days will be critical. As we move from response to recovery to full-service resumption, our focus will be on working with customers to get the supply chain back in sync.”

CP officials reported that there were more than 20 major washouts along its Cascade and Thompson Subdivisions and that they had to bring in 150,000 cubic yards of material to rebuild the right-of-way. Hundreds of employees and contractors were mobilized to respond. The railroad also helped local communities, including bringing 10 portable generators to be delivered to the Cooks Ferry First Nation and arranging meals, milk and baby formula to be brought to the Boston Bar Food Bank.

Further south, BNSF Railway is repairing its tracks in Washington, where flooding impacted the rails there as well. This weekend, service was restored on the Bellingham and Cherry Point Subdivisions, but the Sumas Sub remained out-of-service.