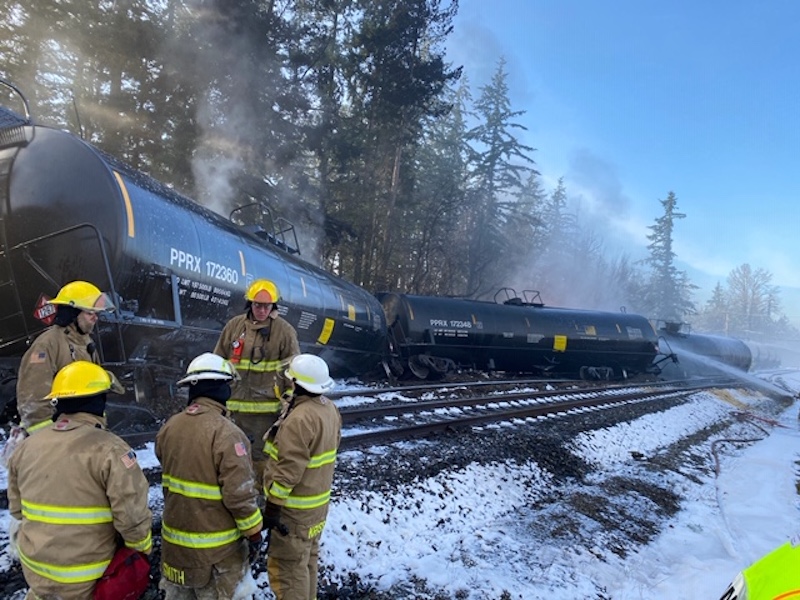 Seattle’s NPR affiliate reports that the FBI is leading the investigation into the derailment of a BNSF Railway oil train last December. Photo Courtesy of the Washington Department of Ecology.

CUSTER, Wash. — The derailment of an oil train north of Seattle in December 2020, was the result of sabotage, according to a report from KUOW News, NPR’s affiliate in Seattle.

No one was injured but hundreds of people were evacuated on Dec. 22, when a BNSF Railway oil train derailed and exploded near Custer, Wash., on the Bellingham Subdivision. Officials previously said that the Federal Railroad Administration and National Transportation Safety Board were investigating the incident, which is normal following such a high-profile derailment, but sources tell KUOW that the Federal Bureau of Investigation has also opened up a criminal inquiry into it. The FBI would neither confirm nor deny the existence of such an investigation.

But according to transcripts of a disciplinary hearing for one of the crew members aboard the train, officials with the International Association of Sheet Metal, Air, Rail and Transportation Workers (SMART-TD) believe the train was derailed on purpose. “We know from the FBI investigation, from how trains operate, how trains work, how the couplers work, how the pin lifters work, that this incident was caused without a doubt by sabotage,” Korey McDaniel, a member of SMART’s safety team, told BNSF.

According to documents reviewed by KUOW, the train derailed when it split into two sections and the trailing cut of cars, which were being pushed by a DPU, crashed into the lead cut. Investigators believe someone may have uncoupled two cars toward the middle of the train and also turned the angle cocks to bottle the air so brakes did not engage. “Whoever did this had enough knowledge of railroad equipment to know what he’s doing and enough knowledge of an air-brake system to know what to do,” said Russell Quimby, a retired National Transportation Safety Board investigator contacted by KUOW to be an independent expert on the story.

KUOW reports that the FRA and NTSB reports into the incident are expected to be released later this month.