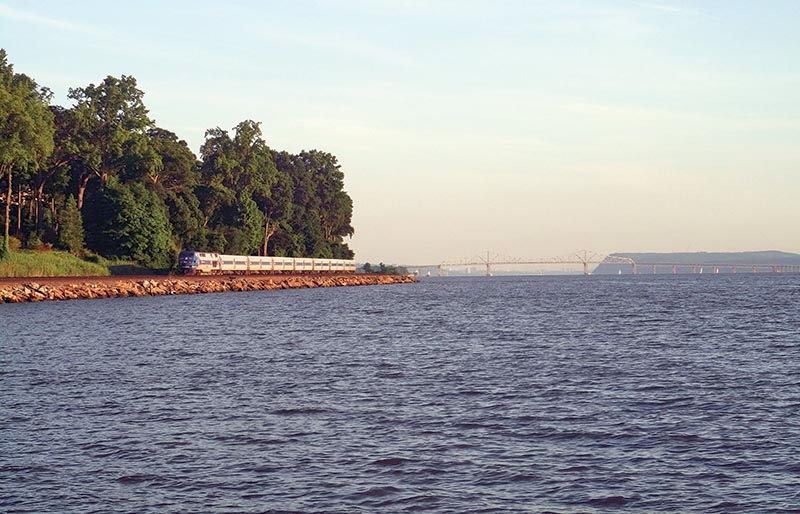 The relationship between railways and rivers is a long one. While rail is, relatively speaking, young and mechanical, and rivers are ancient and natural, it is not an exaggeration to say that without rivers the railways would not exist.

Water transport is one of the oldest forms of moving people and goods in human history, but it is also a limited system. Early European settlers to North America found that any place not near a river, bay, or large lake was a place very hard to get to. Floating on water was much easier than building a primitive road. Canals were one early solution, connecting different rivers, or otherwise improving rivers that were too shallow or contained rapids. From the first canal on the Connecticut River in 1795 to the opening of the 363-mile Erie Canal a generation later, these “artificial rivers” were the first attempt to build inland transportation on the continent.

The first rail lines duplicated the logic of the canal system. They typically served to augment river traffic by linking valleys and waterways. Both Pennsylvania Railroad and Chesapeake & Ohio were outgrowths of canal systems, and both were designed to cross the Allegheny Mountains and connect eastern waterways with western ones. Both C&O and competitor Baltimore & Ohio were built to reach not only the vast uncolonized territory west of the Appalachian ridge, but also the 981-mile-long lifeblood of the Ohio River.

As the American rail network developed, lines began to compete with rivers, rather than augment them. The rapid advancement of locomotive technology meant that railways were increasingly faster than even the most advanced steamboat. Some of the fastest steamboats of the 19th century plied the Hudson River at speeds approaching 30 miles per hour. Train technology soon outstripped this, with a steam locomotive of the parallel New York Central “Water Level Route” clocking an alleged 100 mph in 1893.

While there are many examples of rail lines being built as competitors to parallel waterways, more often the association of rail and rivers stemmed from pragmatics. Because friction is the enemy of rail transportation, a key engineering principle is to keep grades low and curves to a minimum. As a result, the best routes across the continent often followed the natural courses of water. Some of the continent’s most important lines have strong associations with rivers — New York Central with the Hudson and Mohawk; Canadian Pacific with the Fraser; Northern Pacific with the upper Missouri.

The grandest example, of course, is the Mississippi River. Several roads have more or less followed the banks of the “Big Muddy,” from Burlington and Milwaukee in the north (see page 46) to Missouri Pacific; Gulf, Mobile & Ohio; and especially Illinois Central throughout the central and southern reaches. But for every line that paralleled the Mississippi, there were far more whose great desire was to cross it. For decades, the Mississippi was a great hurdle for rail traffic, and even after the construction of the first bridge at Rock Island, Ill., in 1856, it remained an expensive barrier to cross.

More than 150 years later, the grand river remains an imprint on the mind of U.S. railways. Though it has been bridged over and over again, the Mississippi remains a kind of psychological border. Yes, Norfolk Southern crosses it to terminate at Kansas City, Mo., and yes, BNSF has a line to Birmingham, Ala., some 216 miles east of the river. These remain the exception, rather than the rule. In railway geography, the Mississippi is the line that divides east and west and — with a bit of engineering — sometimes unites them, and is one of the most profound places in the American landscape.

This article appeared in the August 2021 issue of Railfan & Railroad. Subscribe Today!