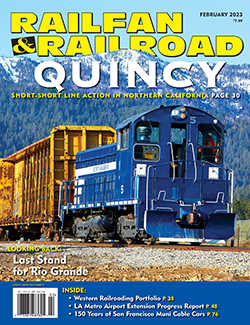 Recently, I was reading a news story on Railfan & Railroad’s website written by Associate Editor Justin Franz. [Did you know we post breaking news online? Check out railfan.com/railnews for free daily news stories year-round. —Ed]. The story explained how a major American railway, namely Union Pacific, hoped to make a radical change to the way it deploys train crews. The upshot is that UP managers want to reduce the size of train crews from two to one.

This requires some explanation. Most major North American railways have two-person crews. The engineer primarily operates the locomotive and the train-wide air brakes. The other crewman, the conductor, has a varied job. The conductor communicates with the dispatcher. If the train must pick up or drop off cars, it is the conductor who works the ground — that is to say, he gets off the engine to throw switches, help couple and uncouple cars, physically connect the air brakes, and the like.

What UP hopes to do is to convert the job of conductor into a job they call an “expeditor.” These personnel would manage all of the ground work that conductors currently do. Unlike conductors, however, an expeditor would not travel with the train and instead be stationed in places where trains often have to perform work, or follow the train in a motor vehicle, driving to where they are needed, when they are needed. Up in the cab? Engineers would continue to do their current jobs, albeit with extra radio communication and signal-related duties.

It is perhaps unsurprising that UP’s proposal is controversial, especially coming on the heels of a narrowly averted national railroaders strike. My point in talking about this example, however, is not to pick sides in this battle. Rather, it is to illustrate a central quality (or vice) in the railroad world — stubbornness.

For UP managers, stubbornness comes in their dedication to the idea that financial success means keeping costs as low as possible. Meanwhile, unions representing train crews (such as the Brotherhood of Locomotive Engineers and Trainmen, or the International Association of Sheet Metal, Air, Rail and Transportation Workers) are stubborn in an almost default opposition to any working arrangement that is different from the present way of doing things.

This conflict, however, is just the latest example. Stubbornness is everywhere throughout the industry. It flows from the essential nature of railroading. The industry is infrastructure-heavy. Rail lines take years, if not decades, to build and often at great expense. Further, once built, these lines must be used frequently to pay off construction costs. Changes can be slow and expensive to achieve, and take years to prove their value, resulting in a general hesitancy throughout the industry toward anything new. Old signal relays still work, and are already paid for, so why replace them? New equipment might be more efficient, but it might not work as promised, so why take the expensive risk? Rural roads don’t see a lot of traffic, so why install crossing gates with company money? Higher wages and benefits won by unions also mean increased overhead.

Yet stubbornness sometimes brings good things, whether for railroaders, enthusiasts, or the general public. Consider — stubbornness is why old steam locomotives were preserved for later restoration and use. Stubbornness is part of why Amtrak never fully got rid of its long-distance trains. It is also part of why the railroads, in general, survived through financial calamities such as the Great Depression or the deindustrialization of the 1970s — someone, somewhere, insisted the trains keep going. We shouldn’t be too quick to discount stubbornness. For all its faults, it is why there will still be railroads — and railroaders — long into our shared future.

This article appeared in the February 2023 issue of Railfan & Railroad. Subscribe Today!