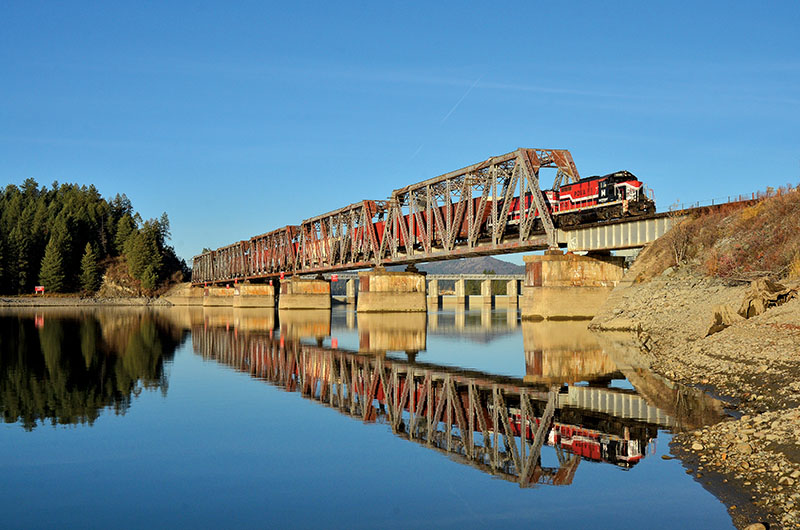 Albeni Falls Dam can be seen beyond the ex-GN bridge as the Sandpoint Turn rumbles eastward on October 30, 2017. The occasional draw-down of Lake Pend Oreille and the upper Pend Oreille River allows photographers to capture this angle without standing neck-deep in water. Bruce E. Kelly photo 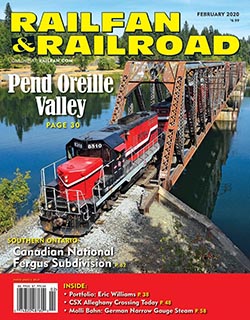 By Bruce E. Kelly/photos as noted

Many short lines in the Pacific Northwest today trace their existence to the birth of Burlington Northern in 1970, the death of The Milwaukee Road’s western lines in 1980, declining business on Union Pacific and Southern Pacific branch lines, and the shedding of surplus trackage following each of those events. Some short lines have changed hands every few years, while others have kept their initial non-Class I identity for decades.

The Pend Oreille Valley Railroad, based in Usk, Wash., ranks among the relative long-timers. Its formal name is pronounced “POND-oh-RAY,” while its POVA reporting marks are commonly vocalized as “POE-vuh.” A grassroots effort launched POVA in 1979 to maintain service on a 61-mile Milwaukee Road branch north of Newport, Wash., which was otherwise headed for abandonment.

During the 1990s, freight business on the north end of the branch dwindled, but POVA gained new shippers and new trackage from BNSF Railway, reaching eastward from Newport to North Sandpoint, Idaho, where interchange is made with BNSF Railway. A few POVA cars get handed off from BNSF to Union Pacific. With a customer base dealing mainly in wood products and paper, POVA has seen its fortunes mirror whatever is happening in the housing market, and in the American economy in general. 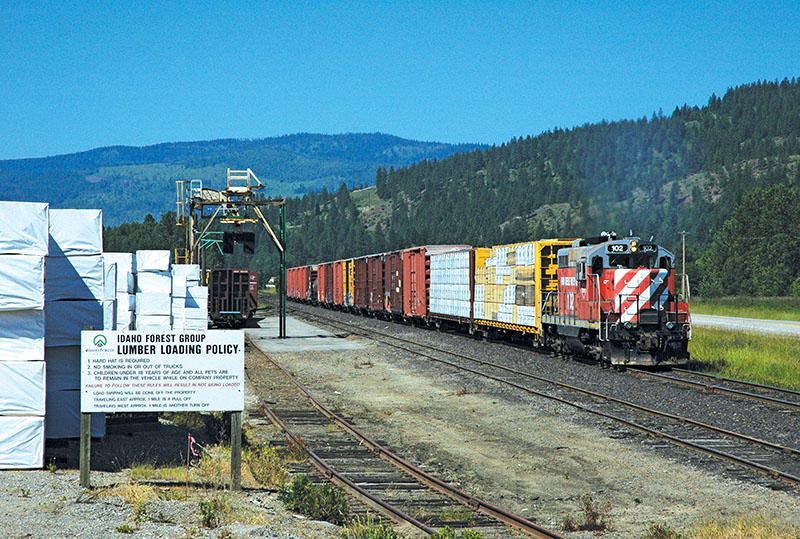 POVA Predecessors
Flanked by mountains and rarely beyond sight of the Pend Oreille River, POVA’s former Milwaukee Road trackage north of Newport can best be described as “scenic.” The word “rugged” comes into play the last 10 miles between Ione and Metaline Falls, with the railroad vaulting rocky Box Canyon on a 145-foot-high steel bridge, threading a pair of tunnels, and tackling a short but steep grade reaching 3 percent.

The branch was constructed by Idaho & Washington Northern Railroad. In 1908, I&WN completed its first 44 miles from McGuires, Idaho, northward through Rathdrum and Spirit Lake to Newport. At McGuires, I&WN connected with what became Great Northern’s electrified branch between Spokane, Wash., and Coeur d’Alene, Idaho, and at Newport it interchanged directly with GN’s main line. Just north of McGuires, I&WN crossed and connected with Spokane International (later owned by Union Pacific). I&WN eventually acquired trackage rights on SI to run directly into Spokane. By 1910, I&WN grew by another 61 miles from Newport north to Metaline Falls. Like POVA today, I&WN earned much of its revenue from hauling timber products, but in its heyday, the far north end tapped a fair share of mineral products as well.

Financially drained by the difficult bridge, tunnel, and grade work north of Ione, I&WN was sold to The Milwaukee Road in 1916. By then, Milwaukee had its own branch between Spokane and Coeur d’Alene in place. Splicing that into the former I&WN at McGuires produced a 120-mile MILW branch running from the outskirts of Spokane clear to Metaline Falls. In 1976, MILW trackage between McGuires and Newport was abandoned, and Milwaukee gained trackage rights between Spokane and Newport via BN’s former GN main line. 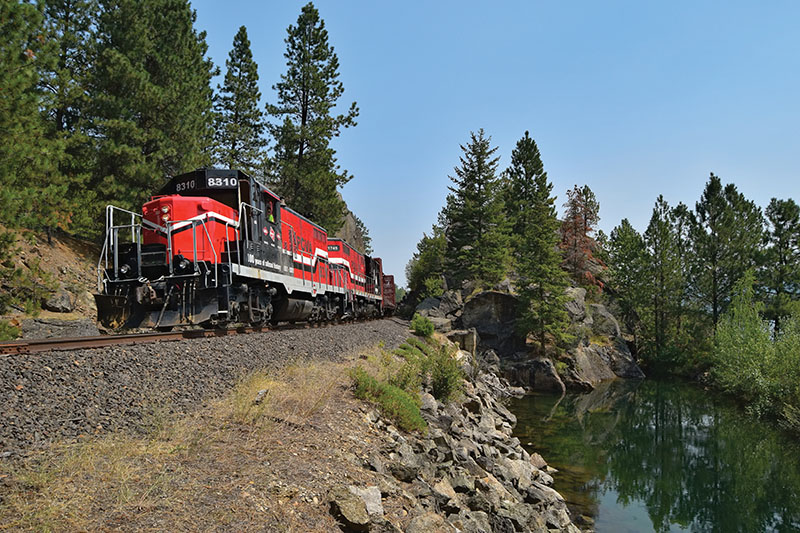 The following year, The Milwaukee Road hinted it was planning to abandon the rest of the branch north of Newport. Hundreds of jobs — especially at the Lehigh Portland Cement plant in Metaline Falls and the Louisiana Pacific lumber mill in Ione — were at risk. Citizens, business leaders, and county commissioners rallied interest in a new port district to manage the Milwaukee branch, while state officials negotiated for federal funding to acquire it.

In September 1979, the Port of Pend Oreille completed its purchase of Milwaukee’s Metaline Falls branch, and on October 1, 1979, the Port’s newly formed Pend Oreille Valley Railroad opened for business. Short line conglomerate Kyle Railways handled POVA’s train operations until 1984, at which time the Port took charge of running its railroad. Interchange of POVA cars to and from the outside world was performed by a BN local that traveled between Sandpoint and Newport on a segment of the former GN main line. That line had been demoted to branch status in the early 1970s after BN channeled all its Spokane–Sandpoint traffic onto a piece of former Northern Pacific that became known as the Funnel.

After 19 years of running the former MILW branch, POVA grew eastward. In March 1998, it acquired 25 miles of BNSF’s former GN main from Newport east to Dover, Idaho, plus seven miles of trackage rights from Dover east to BNSF’s small interchange yard at North Sandpoint. To proceed past Dover, POVA crews must radio the UP dispatcher for a track warrant. That’s because UP abandoned nearly four miles of its own main through the heart of Sandpoint in 1996 and began using BNSF around the north side of town. UP was eventually granted dispatching authority for BNSF’s Dover–Sandpoint trackage.

POVA not only gained new customers to serve on its way to Sandpoint, it inherited a piece of railroad that was much closer to main line standards. Decades earlier, GN had straightened a number of its curves along the Pend Oreille River and re-engineered its crossing of the river at Albeni Falls, where a hydroelectric dam was completed in 1955. Back then, GN track between Newport and Sandpoint was good for 60–79 mph for passenger and 40–50 mph for freight. Today, POVA trains adhere to a more leisurely 20-mph pace…

Read the rest of this article in the February 2020 issue of Railfan & Railroad!