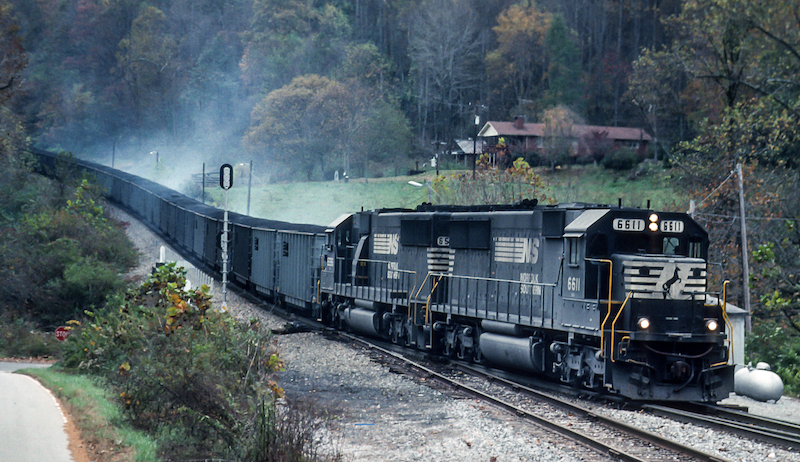 Once the steepest main line railroad grade in the country, the former Southern Railway line has sat unused for two decades. A Norfolk Southern coal train is seen at Melrose, N.C., in November 1995. Photo by Steve Barry.

SALUDA, N.C. — A trio of non-profit organizations has made an offer for Norfolk Southern’s route over the Saluda Grade in North Carolina — one of the steepest and most dangerous pieces of main line railroad in North America — with the hope of turning it into a rail trail, the Greenville Journal reports.

The exact offer was not released, but NS has expressed an interest in selling the route in the past. The offer was for about 30 miles or railroad between Inman, S.C. and Zirconia, N.C., with about 15 miles in each state. The line was built in the 1870s and was operated by Southern and Norfolk Southern until 2001. With a 5 percent grade, it was the steepest standard gauge, main line railroad in the United States.

The coalition of non-profits, called Saluda Grade Partners, said they would like to see the route “railbanked,” a process that allows the right-of-way to be turned into a trail but it could be turned back into an active rail line should the need ever arise. However, considering the operational challenges of the route, it seems unlikely a railroad like NS would ever want to reopen it.

“Norfolk Southern has expressed interest in selling the line and has no plans to use it for trains in the foreseeable future,” the groups wrote online. “We envision the Saluda Grade as a multiuse path that will beckon people outdoors for walking, running, biking, adaptive mobility, and other compatible modes of recreation and travel.”