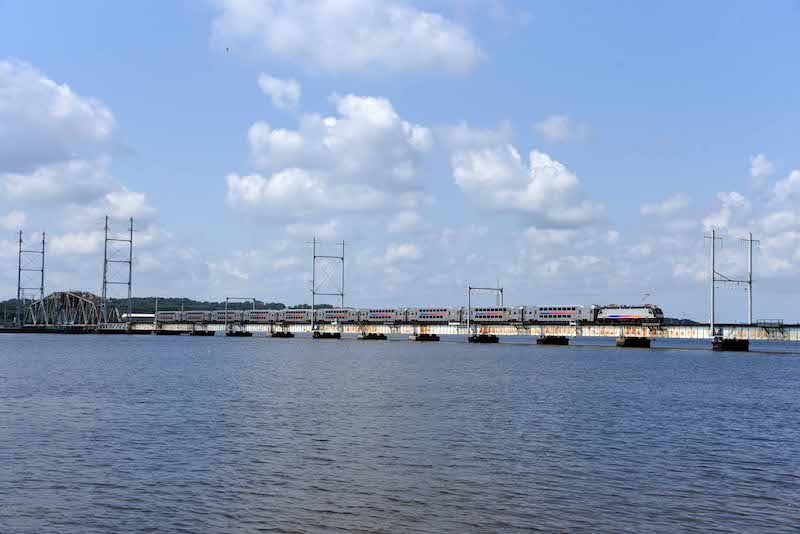 The bridge, used by North Jersey Coast Line trains, was heavily damaged during Hurricane Sandy in October 2012. In May, board members approved a $248 million construction contract that will see the swing span replaced with a lift bridge. Design and build is expected to top out at about $446 million.

In late August, a large crane and barge were at work on the Perth Amboy side. Construction is expected to take four years, with work on the approaches starting first, then moving to the span itself.

Sandy heavily damaged the bridge, called “River Draw,” washing out the approaches with water overtopping the deck and knocking the 21 individual spans out of alignment. Two tug boats also broke loose during the storm hit the bridge. Repairs took more than a month.

River Draw is the sole rail link for 17 of the 20 stations on the NJCL to the major job centers of Newark and Manhattan, carrying about 10,000 commuters each day (at least before the pandemic). Conrail Shared Assets also uses the bridge – daily freight OI-16 between Elizabeth and Browns Yard in Sayreville often runs with Norfolk Southern’s Erie Lackawanna heritage SD45-2 number 1700.

The span was built in 1908 to serve the New York & Long Branch, jointly operated by Central Railroad of New Jersey and the Pennsylvania Railroad. It opens numerous times during the day for marine traffic.