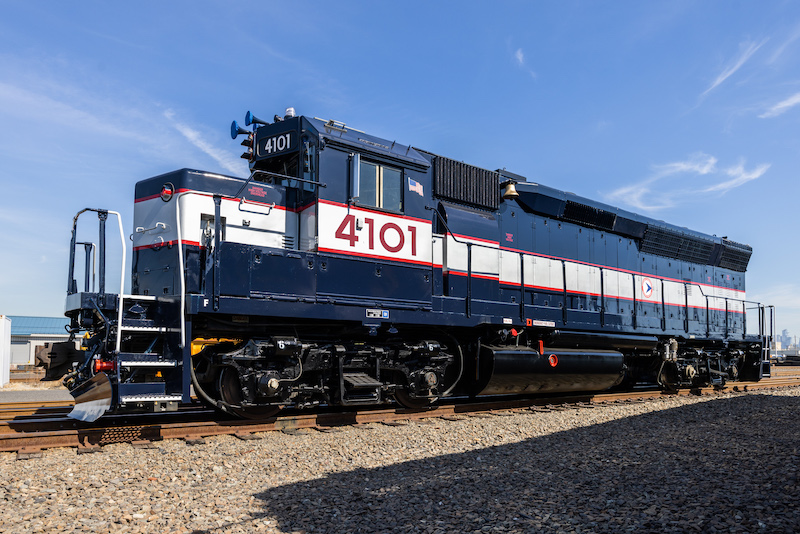 KEARNY, N.J. — On October 12, 2022, NJ Transit “unveiled” its newest heritage unit. NJT 4101 (née-CNJ 3672, NJ DOT) was recently painted into NJ Department Of Transportation blue, silver and red. To mark the occasion, NJT posed the locomotive next to sister locomotive 4109, which was repainted in 2019 into its as-delivered CNJ blue and yellow.

The thirteen EMD-built GP40Ps were a unique model designed for the Central Railroad of New Jersey to operate for New Jersey Department of Transportation’s Commuter Operating Agency and delivered in 1968. While a 3,000 horsepower prime mover provided the tractive effort, a steam generator provided heat to the passenger cars. During subsequent rebuilding, the steam generator would be replaced with head end power equipment. The units had a flat back, like a tunnel motor, that would be replaced with a standard cone-shaped cap during rebuilding at the Conrail Juniata shops. Ultimately, a generation of variants of this design would serve in passenger service.The NJDOT paint scheme, nicknamed the “Bluebird” scheme, was carefully researched by those at New Jersey Transit and the United Railroad Historical Society of New Jersey before applying the correct colors to 4101. Used first on the Erie Lackawanna-operated fleet of U34CHs, it would make its way across the rest of the fleet as time progressed, finding the GP40Ps for the first time in 1978. When NJ Transit Corporation assumed operation of the commuter services in New Jersey in 1983, the now famous “disco stripes” would begin to replace the “Bluebird” scheme.As NJ Transit has taken delivery of other models of locomotives over the years, these 13 GP40PH-2s have stayed on the roster. And while there is still some mechanical work to be completed, 4101 will be returning to regular passenger service soon.