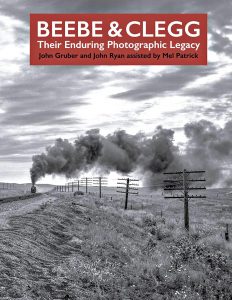 “Beebe and Clegg: Their Enduring Photographic Legacy”, a new book from the Center for Railroad Photography and Art, details how partners Lucius Beebe and Charles Clegg introduced railroad photography and the world of railroading to the popular audience beyond railfans. The authors, John Gruber and John Ryan assisted by Mel Patrick, bring the best of Beebe and Clegg’s photographic work together in one book for the first time, using high quality duotone printing. Lucius Beebe (1902-1966) initially championed the three-quarters or “wedge of pie” perspective in his photography, while Charles Clegg (1916-1979) introduced a more innovative outlook, boosting creativity for both of them. Their photographs shine in this new book, produced with the best of modern digitization, design, and printing techniques.

Beebe and Clegg met at a party in Washington, D.C., in 1941. Beebe already was an established author and newspaper reporter. He wrote a column, “This New York,” about the city’s Cafe Society for the New York Herald Tribune and had three railroad books under his belt. He and Clegg established a lifelong personal and professional partnership. At a time when it was not generally accepted outside New York City’s upper crust, their openly gay lifestyle did not seem to interfere with their ability to obtain cooperation from railroad officials, promotional support from the news media, or profitable book sales.

After service in the Navy during World War II, Clegg quickly learned photography and traveled with Beebe across the country. The two made photos and gathered information for their books, which hit a high point with Mixed Train Daily. Following its release in 1947, they started incorporating work by other photographers in their books.

They left the east in 1950, moving to Virginia City, Nevada, and continuing their writing and publishing venture. Together, they purchased rights to the historic Virginia City newspaper, the Territorial Enterprise, and served as editor and publisher. Beebe wrote the column “This Wild West” for the San Francisco Chronicle from 1960 until his death.

“Beebe and Clegg: Their Enduring Photography Legacy” includes 222 images from the California State Railroad Museum Library and Archives, all scanned from negatives and carefully cleaned and checked, revealing surprises. Many are previously unpublished. In ten of Clegg’s photos, Beebe shows up in a corner. In their books, Beebe was cropped off, so these previously published photos have a new perspective. In addition to the CSRM collection, 36 images come from other sources.

The book through eight chapters traces Beebe and Clegg’s life and times together, their visual influences, short lines, narrow gauge lines, Nevada and the Virginia & Truckee, and their photography. “Their legacy is larger than the publications they produced, for they demonstrated that railroads serve America as an icon of its experience,” the authors conclude.

The 224-page book goes on sale for $59.95 at the Center’s Conversations conference April 13–15 at Lake Forest (Illinois) College. Copies may be ordered on the Center’s website (www.railphoto-art.org/books) and will be shipped immediately after the conference. A traveling exhibit is in the works.