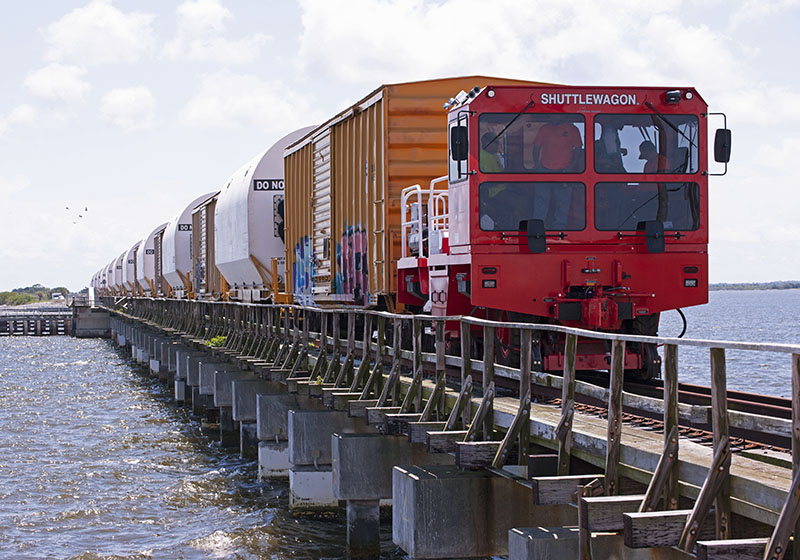 CAPE CANAVERAL, Fla. — After being dormant for a decade, NASA’s internal railroad at Cape Canaveral, Fla., is back in action. Earlier this month, NASA took delivery of rocket boosters for the Space Launch System rocket and Orion spacecraft that will eventually put men and women on the surface of the moon. The boosters were built in Utah and made a 2,800-mile trip across eight states to reach the Kennedy Space Center, home to the 38-mile NASA Railroad.

The railroad dates back to the earliest days of the American space program when the Florida East Coast Railroad constructed a 7.5-mile branch to the Kennedy Space Center from its mainline just north of Titusville, Fla. The line required a drawbridge to be built over the Indian River to enter the restricted space center area. At a spot called Wilson Yard, FEC tracks connected with NASA-owned trackage. Two branches were built out of Wilson Yard totaling 28 miles: One went to an industrial complex and NASA’s Vehicle Assembly Building and the other, which followed the Atlantic Coast, went to two lunch pads and a U.S. Air Force facility. 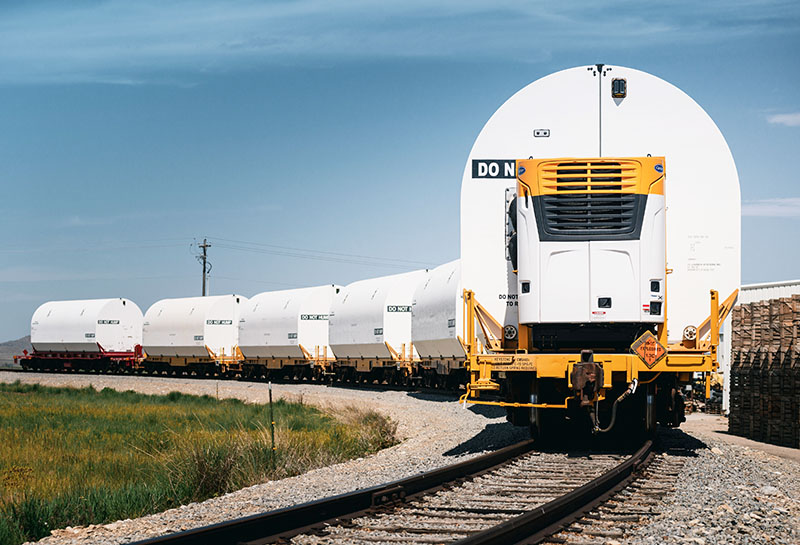 The boosters that will power rockets to the Moon. Photo Courtesy of NASA.

In the 1970s, NASA rostered a small fleet of Alco switchers. In the early 1980s, the Alcos were replaced with EMD SW-1500 locomotives, built between 1968 and 1970 for the Toledo, Peoria and Western Railway. The locomotives were painted red, gray and black, similar to the Bangor & Aroostook’s paint scheme (one was later repainted blue and white with red stripes). One of the original Alco S2 locomotives was preserved at Florida Gold Coast Railroad Museum in Miami. At about the same time, NASA purchased the 7.5-mile branch between Titusville and Wilson Yard from FEC. At its peak, NASA’s railroad had 38 miles of track. From the 1980s until the end of the space shuttle era in 2011, NASA’s internal short line moved rocket boosters and other supplies, including helium, needed to launch space ships. With the end of the shuttle program, NASA shut down the railroad and dispersed much of the equipment, including the three SW-1500 switchers. NASA 1 ended up at the Natchitoches Parish Port in Natchitoches, La.; 2 was sent to the Gold Coast Railroad; 3 ended up on Indiana’s Madison Railroad. However, NASA maintained the track should it ever be needed again.

That day finally arrived on June 15, when 10 rocket booster segments arrived by rail and were interchanged to NASA by FEC at Titusville. The rocket boosters, which were delivered on a specialized rail car, were moved by trackmobile the final few miles to the space center.

“It is good to see booster segments rolling into the Kennedy Space Center,” said Mike Bolger, program manager of Exploration Ground Systems. As NASA prepares to send humans back to the moon and eventually to Mars, it is likely that this will not be the last shipment to roll on NASA’s iconic “rocket railroad.”