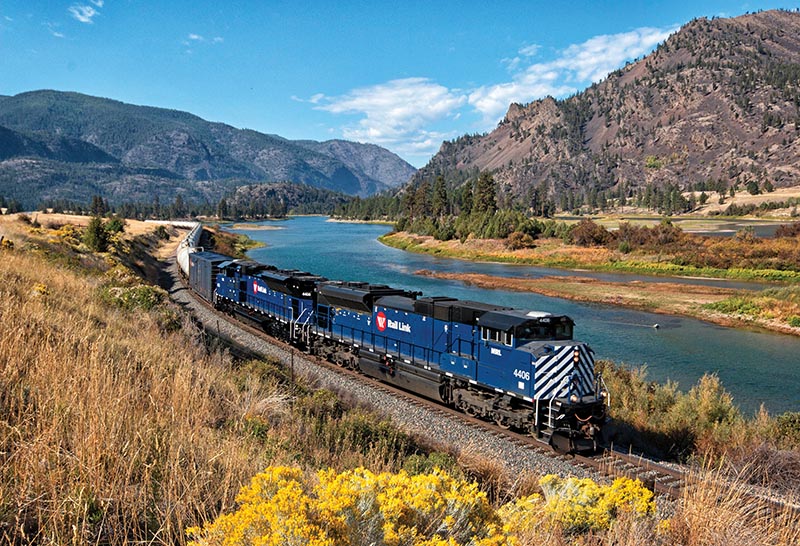 A pair of Montana Rail Link SD70ACe locomotives leads the eastbound Gas Local over the 10th Subdivision near Perma, Mont., on September 26, 2015. The two locomotives were built new for MRL in 2014 and are often seen leading the Gas Local between Missoula and Thompson Falls. 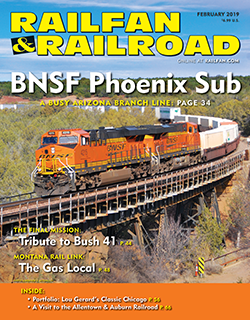 You can almost set your watch to it. Stand along the tracks west of Missoula, Mont., before dawn or in the mid-afternoon and look east; it won’t be long before a pair of blue and white SD70ACe locomotives and a string of tank cars roll into view.

For two decades, Montana Rail Link’s twice-daily Gas Local has moved petroleum products across western Montana between Missoula and Thompson Falls for ConocoPhillips. Besides serving one of MRL’s biggest online customers, the Gas Local is also popular with local and visiting railfans because it offers one of the most reliable ways to see and photograph the railroad’s attractive locomotives. The stunning scenery the train runs through doesn’t hurt either.

MRL operates on 937 miles of track across southern Montana and northern Idaho, most of which is the former Northern Pacific Railway main line connecting Jones Junction, just east of Billings, Mont., with Sandpoint, Idaho. The main line across the state is a rugged railroad that was first put down in the 1880s and includes two major mountain grades that still require manned helpers in 2019 — the 1.8 percent Bozeman Pass and the 2.2 percent Mullan Pass. 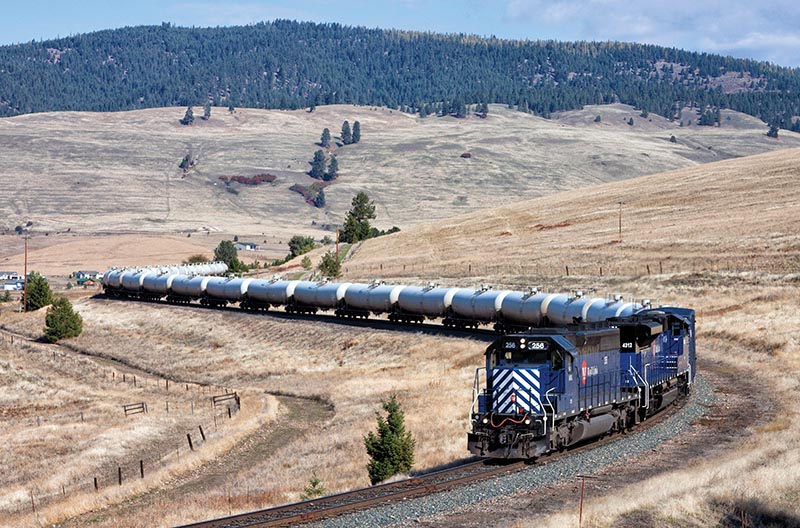 Those two grades were among the reasons why the previous owner, Burlington Northern, wanted to get rid of the old Northern Pacific main line in the 1980s. Years earlier, when plans for a three-way merger with Great Northern and Chicago, Burlington & Quincy were first drawn up, officials had hoped to turn the NP main line across Montana into a lightly used secondary route while sending high-priority trains over the GN. But by the 1980s, there was enough freight traffic to sustain at least two routes across Montana, especially with the arrival of coal trains from the Powder River Basin of southeast Montana and Wyoming. Burlington Northern (which was created in 1970 by the previously mentioned merger) decided to hatch a different plan. Instead of downgrading the old NP, it would find a new operator for it; BN’s trains would still cross Bozeman Pass and Mullan Pass, but moving those trains would be another railroad’s job.

Enter Dennis Washington. The native Montana businessman was an up-and-coming millionaire who owned a construction company and mining operations and was looking to expand his business profile. Negotiations began in 1986, and not long after, BN had agreed to sell a number of former NP branches to Washington and lease the main line to him for 60 years. On October 31, 1987, Washington’s new railroad, dubbed Montana Rail Link, was born.

The vast majority of trains that cross MRL are from BN successor BNSF Railway, including grain, coal, manifest, and low-priority intermodal trains. It’s also common to see trains hauling Boeing fuselages. On an average day, one can expect upward of 20 trains across the railroad. Most trains have BNSF locomotives, but MRL also runs a number of local freights and switch jobs out of Billings, Laurel, Livingston, Logan, Helena, and Missoula. It also has two road freights between Missoula and Laurel called the “ML” and “LM” that are often led by two of the railroad’s fleet of 29 SD70ACe locomotives. While the ML and LM are the longest trains MRL operates with its own motive power, they can be unpredictable and even the most dedicated railroad enthusiast can have a hard time tracking them down. The one train that isn’t hard to find for visiting railroad photographers is the twice-daily Gas Local…